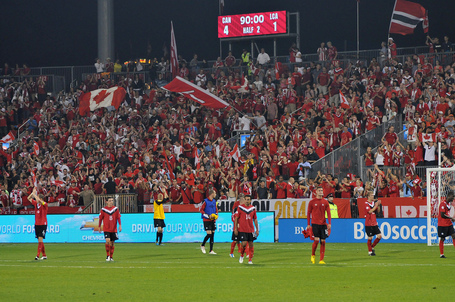 Canada returns to its current home field at BMO tonight and will certainly be greeted by a warm reception from what will hopefully be a decent sized crowd of Canadian supporters.  The reception will be extra warm because fans have had the past month for the excitement to build up since the last home match and team Canada's record setting performance on Friday has brought that excitement to the boiling point for many fans.  Sure it was 7 goals against a terrible St. Lucia but as fans of the Canadian national team, and with many readers also fans of Toronto FC, we do not often get the chance to celebrate that kind of win.  So yes we can look at the result with a grain of salt because of who the opposition was but a win like that will have lasting benefits in the short and long term because of the added confidence it provides.

Canada comes in to this game tonight a little thin thanks to a number of injuries, a few players turning down invites, and the fact that at the best of times Canada's selection pool is not deep enough.  Hart will only have 17 players available to him with Will Johnson returning to Salt Lake City after picking up an ankle injury and the coach deciding there was no need to call in a replacement.  That may lead to Hart giving Joseph Di Chiara a chance in tonight's match or he may stick with the more known choices in De Guzman and Dunfield for the midfield positions.  Hart may also decide that after having played 70 minutes on Friday Jazic, at 35 years old, doesn't have another 90 minutes in him which could mean that Toronto FC fans will get to see Ashtone Morgan in action for Canada.  If that does happen I fully expect it to receive the biggest round of applause the entire night, well unless De Ro beats Dale Mitchell's scoring record (yes TFC fans we'd better all stand and applaud that)

Another thing to remember is that from 4:00- 6:30 there will be a "Taste the Soup" food drive taking place at Maro.  Come out with your donation, have a beer of three ($12 pitchers) say hi to some good Canadian supporters and then head down to the match as part of a large march.  If you have never been to a pregame at Maro this would be a great night to go to your first one.

Click here for Duncan's full preview, both myself and Duncan will be at the game tonight so we won't be on the thread much but we'll get lineups on there when they're available as well as some half time and post game comments, hopefully you will all be at the game as well so that won't matter.