Canada 0:0 Puerto Rico. Boring with a side of Nothing

Share All sharing options for: Canada 0:0 Puerto Rico. Boring with a side of Nothing

Canada were coming off a record setting performance that none of us really got the chance to see.  Tonight on the other hand they went out and gave a performance that many of us probably wish we had not seen.  The difference between the 7-0 win in St. Lucia and the 0-0 draw with PR was like night and day.  The Canadian team came out flat from the very beginnning and a performance like this is sure to leave a lot of fans asking questions for the next month. 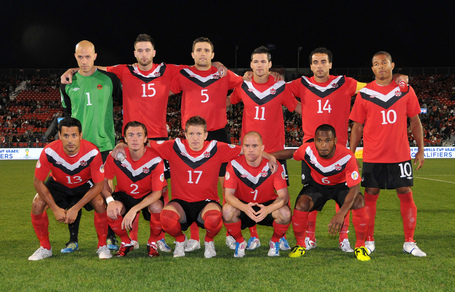 The good news for Canada is that a 1-1 draw between St. Kitts and Nevis and St. Lucia means that Canada only needs a single point from the final two matches, both against St. Kitts, to advance to the next round of qualifying.  From a strictly results based viewpoint things are going just fine for Canada and they are now all but assured of advancing to the next round.  From a performance viewpoint though there is plenty of room for improvement based on what I saw tonight.

The good news for Canada is that the young back line again looked fairly strong and up to the task but the problem is that starting from the back up there were just far to many misplaced passes and a real lack of creativity.  Lars Hirschfeld made the one save that he was called on to make but a whole lot of his passes went astray.  Then Canada did have two goals ruled out but in fairness they went in well after the whistle.  So it was not all doom and gloom on the part of the home team but there were some real issues on display.

Canada showed a real lack of desire in this match.  It was hard to find one player on the field tonight that was willing to make the runs and passes that you have to make if you want to unlock a team that took a very defensive approach right from the opening kick off.  It was obvious that PR were more than happy to settle for a draw in this one, which seemed odd considering a draw knocked them out of contention for advancing, and it was always going to be up to Canada to find a way to break them down.  That break down never came though as neither Terry Dunfield nor Julian De Guzman was able to create anything going forward and for much of the game the four attacking players looked isolated and often out matched by the 10 defenders who were constantly behind the ball.  It looked like the kind of match that would be decided on the counter attack but neither team ever really got enough men forward on the attack to allow the other team to counter.

On the whole it was a match that never really got off the ground.  There were maybe a handful of half chances between the two teams and even though Canada controlled most of the ball they gave it away far too cheaply and too often.  The high points of the night probably came from the fact that the game drew over 12,000 spectators which included a very good turnout in the east stand which was filled with local soccer clubs who got behind the CSA's campaign.  The south stand was also quite full as expected thanks to the efforts of Canada's official supporters group, the Voyageurs.  The V's also ran a very successful food drive at the pregame party which last I heard saw the collection of 9 large boxes of canned goods.

This match will do very little to build momentum towards the next game in November but the fact of the matter is that Canada remains right on track to advance out of this group with relative ease and hopefully that will mean Stephen Hart brings in a few more young faces next time around.  Di Chiara got his first call up this time around but never managed to get on the field, at least Morgan got to play down in St. Lucia but sadly he never got a run out at BMO.  The other news for the team is that Iain Hume had to leave the game early on with a hamstring injury and he will join Will Johnson on the injured list from these two matches.  Johnson will now be potentially in doubt for the November games with what seems to be a very bad ankle sprain.

Hopefully we have some post game reactions and interviews to share tomorrow so keep an eye out for that!