It doesn't seem too long ago, that I was bundling up and heading down to BMO Field to watch the 2010 MLS Cup. The game really lacked any sense of a Cup Final, as it was freaking cold and FC Dallas and Colorado were playing. Oh, and it was November in Toronto!

Anyways, the Cup will be lifted inside the Home Depot Center again this year. We're only a couple years removed from when Carson, California got to host the Columbus Crew and New York Red Bulls. But I think a lot of miracles would need to happen in order for that Cup Final to be repeated this year. Seattle and LA looked poised to make a deep MLS Cup run.

It's really tough to predict, or even begin to think about who will win each match-up. We've seen over the past 3 seasons that anyone can beat anybody, and lift the Cup. (Insert NYRB's making the finals, RSL, FCD vs Colorado)

Here is Waking the Red's Wild Card previews( we'll have the others once the games are set).

This has the potential to be a very exciting, fast paced match up. FC Dallas have seen a dip in their form recently, but most players will have long forgotten those games tomorrow night. Brek Shea, and Marvin Chavez will play important roles for the Frisco team. Tomorrow night is where we find out if Brek can really play with the big boys, and show MLS that he's maturing into one of the league's best players going forward. Kevin Hartman has shown he's capable of taking his team deep in the playoffs. He could be the gamebreaker for FC Dallas.

As for the Red Bulls, they'll be missing striker Luke Rodgers because of a knee injury. When both Henry and Rodgers are healthy, they can combine to be one of the most deadly attacking pairs in the league. Rodgers brings the absolute hustle and grit, and quite frankly he's like a mini English bulldog. He also has a knack for being in the right spot and scoring huge goals. Look for Juan Agudelo to step in and partner with the former Barca and Arsenal man.

The real question for the Red Bulls in this match up is their goalkeeping and defense. Frank Rost was supposed to bring some order and stability to the Red Bulls' net, but they haven't look too imposing with him since he's signed from Das Bundesliga. As for the D, Ream hasn't looked as solid as he did last year, and Marquez can be a rock, but can switch in and out of games.

This game could go either way. I could see the Red Bulls coming in and playing a tremendous road game and moving on to face Sporting KC. But I could also see FC Dallas shutting down the Red Bulls completely, leaving the "Big Club" from New Jersey stunned and confused.

The Rapids are the defending MLS Cup champions, but that really doesn't mean anything. This is a rematch of last year's Eastern Conference Semi Finals, and is also a total toss up. The Rapids have been steady all year, nothing remarkable, but not total junk either. We all know they have a talented midfield, with Jeff "Big Red" Larentowicz, Mastroeni, and the gang.

The Rapids have some depth in attack, with Nyassi, Kandji, Cummings, Folan, Casey, and even Akpan. The Rapids don't have any glaring problems, but they don't really jump out and wow you at one certain position.

The exact same could be said for the Crew. Will Hesmer is generally considered to be a solid keeper in MLS, the Crew's Defense is led by Chad Marshall, and Julius James has apparently started playing like the CB he was expected to be when TFC drafted him. Eddie Gaven, and Robbie Rogers will be the difference makers for the Crew in the middle of the park, and Andres Mendoza has shown that he can knock a couple back when it matters.

The Crew and Rapids are almost too evenly matched for me to even begin to make a comment on who should win, but as stated by millions before me, playing at Dick's Sporting Goods Park in late October is never easy or fun for the opposing team. This game could end up being extremely boring, and I'm expecting the patch of the pitch to match the climate outside; freezing, and patchy.

This game could also see the first team to score just sit back, and force the opponent to come at them for the remainder of the game. Either way, we're all excited it's playoffs, and even more excited that TSN ( actually just TSN2, is covering every single game). I never would have been able to guess that some day our nations top broadcaster would show MLS playoffs games that don't involve Toronto or Vancouver.

The MLS Cup playoffs messes with our conception of how things usually operates in soccer. I don't see this year being any different from ofthers. Enjoy the games, and this wonderful little league we've grown to love. 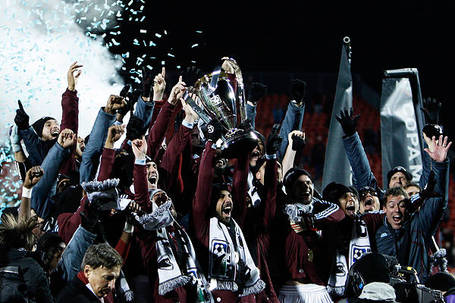