Share All sharing options for: Little notes from Tony Fonseca

The Canadian Men's National Team as you all well know now, has released their 18 man roster. Canada's assistant coach, Tony Fonseca was nice enough to chat with the members of the media this morning (that's right, apparently Waking the Red are part of the media now...). Basically we leaned that Atiba Hutchinson is hurt, Ian Hume is kind of hurt, and Terry Dunfield was just left off the list.

Many are still worried about the amount of playing time (or lack thereof) that Simeon Jackson has had since Norwich has made the jump to the Premier League. But Tony said he doesn't see that as a problem.

"There is always a concern. We want our players to be game fit, but with the potential Simeon has, we always have to take him into consideration," Fonseca said. "At this point, he is a very valid option for us."

A couple of players who may run into some problems, are Will Johnson and Andre Hainault. Johnson's Real Salt Lake punched their ticket into the next round of the MLS Cup playoffs, and Hainault's Houston Dynamo look to be in a good position for their second leg against Philadelphia Union at home.

Johnson will more than likely need to be replaced if RSL keep winning, probably by Terry Dunfield. But Hainault decided to not play for Canada during the MLS Cup playoffs.

"It's his decision not our decision, he decided to play for the club(Dynamo) rather than join the National team at this stage," Fonseca said. "The communication was between Andre and Stephen, and obviously he made up his mind."

No one needs to panic over Hainault. He clearly understands that Canada will advance, and that the game against the Union is a little more important career wise, than the home and home against St.Kitt's. But I have to say, playing soccer on a cricket pitch does help improve players...

Fonseca said the role that experienced vets like Julian De Guzman, Dwayne De Rosario, and others have on the new guys is massive.

"It's so important that a young player comes into this environment, and have a chance to play with more experienced players that can lead the way," Fonseca said. "The expectations are set very high."

Fonseca also said the CMNT has mixed a lot of experienced players with much younger players to help them adapt quickly to the National team program.

We may most likely spank the crap out of St. Kitt's, both home and away. But there are some interesting sub plots developing, stay tuned to WakingtheRed.com during the next set of games for more CMNT team news. 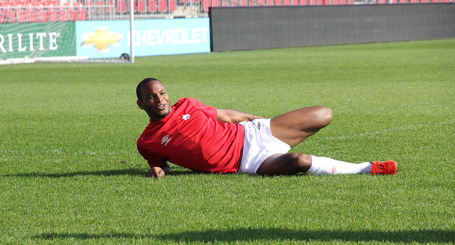