Share All sharing options for: Demitrius Omphroy released by TFC 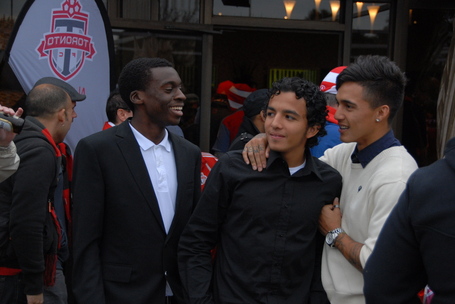 Well I can say not many of us were expecting this.

Demitrius Omphroy just announced that he will not be returning to TFC next season, via Twitter.

Omphroy is the second TFC player to be released today, as Matt Gold tweeted earlier on about being released as well.

This one is a little disappointing. Omphroy never saw first team action, and was moved to forward for the reserves. There was a lot of promise about Omphroy's pace and skill as a right back, but maybe TFC felt comfortable with Eckersley and Morgan at the back. And seeing as Omphroy was moved to forward, it would have been tough for him to start over top of Koef, Plata, Johnson, Soolsma, and Marosevic.

But I'm still confused on why we're giving up on him so early. He's not being paid that much, and he's still very young. But maybe Winter has something special up his sleeve. It will be interesting to see who we bring in, now that Gold and Omphroy have left.

Like Dave suggested with Gold, I could see both players maybe going to NASL teams for regular starting minutes. But I could also see Omphroy being picked up by another MLS team.

What do you guys think? Think TFC got it right by parting ways with Gold and Omphroy now? Or think we should have stuck with the lads for a little longer?