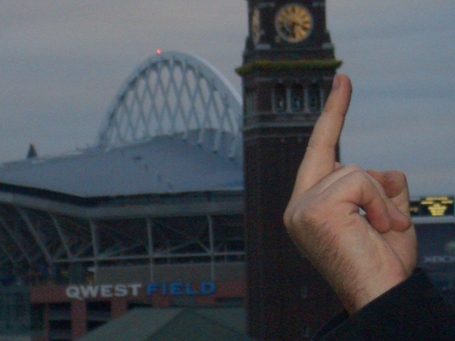 That's my finger, aimed in the direction of Qwest field when I was there last year.  I must say I really enjoyed my time in Seattle, before the game I unwittingly stumbled upon the home pub of a Seattle supporter's group Gorilla FC, all of whom were unfailingly polite and welcoming.  It's a great place to watch a game due to the large and interested crowd, and the night of the game I ran into Danny Dichio and Leo Percovich in a bar, so I have very fond memories of Seattle and am in no way on the ACES side of things.  Tonight though, fuck 'em.

I'd say the key to this game would be how Seattle plays, how they adapt to the loss of Zakuani and White, and whether they can positively harness the emotion that will be in Qwest field after a very traumatic week for Sounders fans.

I'm not all that optimistic for TFC's chances really, but anything can happen and hopefully his two goal performance against Edmonton will inspire Maicon Santos to put in his first good MLS game for a while and help out Gordon and the wingers.  If that can happen, and if Eckersley gets the start and can provide the support to the right winger that the left wingers have been enjoying all year, then we could end up getting something out of this.

Pre game here's a bunch of links for you.  Here's my preview, MLSSoccer.com's preview, go to Sounder at Heart where they've got 5 or 6 different article previewing the game, including the good news for TFC that another Sounders forward, Right Winger Mauro Rosales is out of the game as well.  If you haven't yet developed an appreciation for what Alan Gordon brings, go here to see a Seattle scouting report focussing on him and his work in the Columbus game.

And while you're at it, before the game there's still time to enter in the Waking the Red TFC prediction league, are you smarter than Mo Johnston.   And if you're in Toronto and interested enough in football to be checking this out on a Saturday night, then you really have no excuse not to be at BMO Field on June 1st to see Canada take on Ecuador, get $17 tickets in the Canada supporters section over at the Voyageurs.

I'll be here with starting lineups before the game and game updates.  I had a couple of pints with lunch, and have already cracked open my first beer of the night, so there's a good chance that I'll be drunk by then, join me.