How you doin'? Houston Dynamo

Share All sharing options for: How you doin'? Houston Dynamo 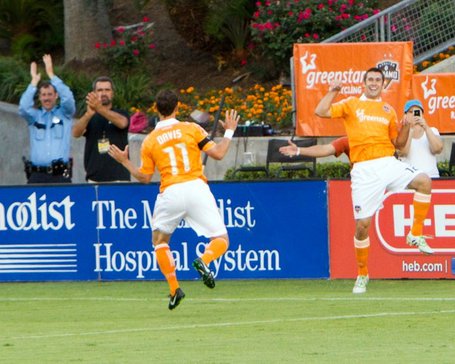 Will Bruin introduces 'the dancing Bear'.  None of that on Saturday please.

If you're like me, you maybe don't pay that much attention to everything going on with the rest of MLS, so may not know all that much about other teams in the league.  To help out with that, I'll be doing a regular-ish feature, inviting a blogger from Toronto FC's upcoming opponents to answer a few questions and give us an idea of what to look out for when TFC play them.

Here to prepare us for Saturday's game and introduce us to Houston Dynamo is Zach Woolsey from SBN's excellent Houston blog Dynamo Theory, which you can check out to get the Houston view on the upcoming game.  So, Houston, how you doin'?

Waking the Red: Will Bruin, rookie and 11th overall draft pick (after the 8th pick TFC swapped for Nathan bloody Sturgis) got a hattrick last weekend, after only scoring once previously this season.  What are the expectations for him this year and going forward?

Dynamo Theory:  The expectations for Will Bruin are high, but tempered. He's been playing some outstanding soccer so far this season and if not for some bad luck and not quite enough accuracy on his finishing, he could easily have a couple hat tricks already.  At the same time, he's a rookie playing his first professional season so he's already accomplished more than most of us thought he would at the start.  It's nice to see a young player step up after being asked to help carry the load caused by injuries up front and really take advantage of the opportunity. There is a quickly building belief that Bruin can be a big time forward for the Dynamo for years to come. Thanks for trading away that pick!

WTR:  What formation and playing style are Houston going with so far?  Will recent spanish signing Sergio Koke break into the side right away, and will that change the formation/style at all?

DT:  The Dynamo have and will continue to play Kinnear's preferred 4-4-2 formation. We're still seeing how Sergio Koke will fit in, but the time he's seen on the pitch so far has been up front in a forward position. There's certainly the possibility that after some more time in training, Kinnear should decided to shift Koke or tinker with his formation, but there's no precedent for him doing so. Then again, from what I've been hearing about Koke in practice and seen from his play over the past few years, he might be the type of talent that finally convinces Kinnear to make some changes. He's been used as a substitute in his first two matches and it seems like only a matter of time before he's in the starting lineup.

WTR:  I noticed the billboard Houston are putting up in Dallas, very nice.  How fierce is that rivalry, was it affected by your move to the Eastern Conference?  When Montreal comes in, would you rather go back to the west or stay in the weaker Eastern Conference.

DT:  The Houston/Dallas rivalry is more about the long-time geographical and social rivalry between Texas' two biggest cities than anything else. The two cities are such different places that not liking a team representing the other is natural and easy.  It's calmed down on the field after some fiery matches in the last few years that saw a lot of physical play and cards, but there is still a desire from each side to out perform the other.  Even with the conference switch, there are still two games between the teams and they still mean just as much to the teams and fans.  As for a long-term thing, I'd be shocked if Houston remained in the Eastern Conference long term and the overall dominance of a conference never last forever in sports.  The East won't remain weaker forever.