This is a guest post, a tactical analysis of last night's game against Dallas from the fine folk over at Keeping A Clean Sheet. You can see a lot more of their work on a bunch of different MLS games by clicking the above link, it's well worth a look. 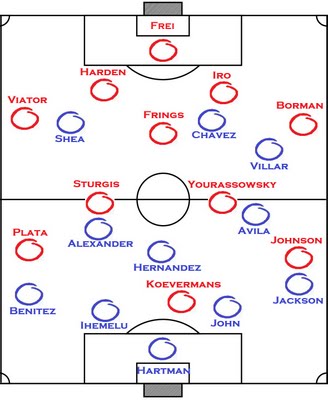 Toronto came into the match having scored the second fewest goals and conceded the most in MLS. However, they have been decent at home picking up 12 of their 17 MLS goals. Dallas has failed to score in the past two MLS matches.
Toronto's Strategy
Off the back of two designated player signings and several trades, the side was almost unrecognizable. Aron Winter started with his preferred 4-3-3 setup. Andy Iro was brought in from Columbus and paired with Harden at central defense. Torsten Frings made his debut in midfield protecting the back four. Sturgis and Yourassowsky played in the center of midfield. Jaoa Plata and Ryan Johnson were on the wings with new Dutch striker Danny Koevermans playing as the central forward.
Dallas' Strategy
Schellas Hyndman went with a similar 4-5-1 that he has utilized lately. One tactical change was pushing Brek Shea up the pitch as a left forward instead of his usual left wing. Also, Jackson moved from right wing to right back. Dallas used a right side trio of Avila, Villar and Jackson and they combined well to outnumber the left side of defense (Borman and Johnson).

First Half Tactics
Toronto began the match looking like a new team. They were incapable of stringing passes and the back four could not get the ball to the midfield. Instead, they resorted to ineffective long balls.  The only few good moves started with Frings getting the ball and finding Ryan Johnson on the left. The Reds rare forays forward usually ended with a poor cross.
Dallas started the match looking dangerous to score. Brek Shea was the lynchpin of the attack. Shea received much more service than his previous two outings; mainly receiving long passes from deep in midfield by Hernandez and short support balls from Alexander and Benitez. Viator was struggling to stay close to Shea and the overlapping of Benitez added a second element. This style occurred on the right with Jackson overlapping. This strategy was creating space out wide but Dallas had few chances because they had nobody in the box to latch onto the end of a cross.
Goal Worthy of Winning any Match
Three minutes after halftime, Brek Shea provided a moment worth the price of admission. He poked the ball away in the center circle and Hernandez sent it straight back to him. The homegrown Texan blazed a trail down midfield and skipped past Frings and Sturgis. About 25 yards from goal he released a left foot rocket the caromed off the left post and bounced in. Toronto FC fans awed at the effort but will be disappointed with the midfield not closing down and the defense not stepping up to challenge Shea.
Goal Opens up Play
Certainly, the match was dying for a goal and Shea's strike opened up the second half. Four minutes later Plata scored an goal, from an offside position. Then, Winter brought on Maicon Santos and Nick Solsma to liven the attack.
The attacking substitutions helped, but also opened Toronto up to the counter. Dallas will be thankful that they kept a clean sheet because they missed some great chances towards the end of the match. Shea had a shot well saved by Frei and Jackson chipped the keeper and hit the crossbar. The substitute Guarda sent a volley from the penalty spit wide after a giveaway by Harden. Guarda pulled a shot from the right wide but Chavez deflected the effort but he was in an offside position.
Toronto turned up the pressure though towards the end of the match sending in long balls and dangerous crosses. The Reds best chance came in the 87th minute from Maicon Santos. He blew an open header over the bar from five yards after a terrific cross by Soolsma. A minute later Iro swung a ball to Koevermans who was offside but still could not put it away.
Conclusion
Looking at the chalkboards on mlssoccer.com, Dallas’ midfield was able to provide service to the forwards, while Toronto could not. While Frings had some effective long balls to Johnson, he misplaced almost as many passes as he completed. Also, Yourassowky and Sturgis were nonexistent in the match. The two combined to complete 18 passes, a stat that must change if Toronto is to score goals.
Additionally, this match exhibits that MLS as a whole lacks finishers. The two sides combined for 31 shots with more than half of them coming inside the box and only resulted in one goal. This profligacy in front of goal may explain why there are so many ties in the MLS this season. Dallas did not finish off the match with a second goal and Toronto had chances to equalize; a script we have seen throughout the regular season.
Dallas will be happy with a road win. However, FCD fans will be mystified and frustrated with their sides inability to finish chances and score goals.
For Toronto, they have played over 300 consecutive MLS minutes without scoring a goal. Aron Winter has a tough task to mold together a brand new side and get them playing well. The playoffs might be a long shot for them but maybe management made all these moves to prepare a unit for next season.