Once again, here's a guest post from Keeping A Clean Sheet giving a tactical breakdown of TFC's game at Kansas City. Check out their excellent work on other MLS games at the above link. 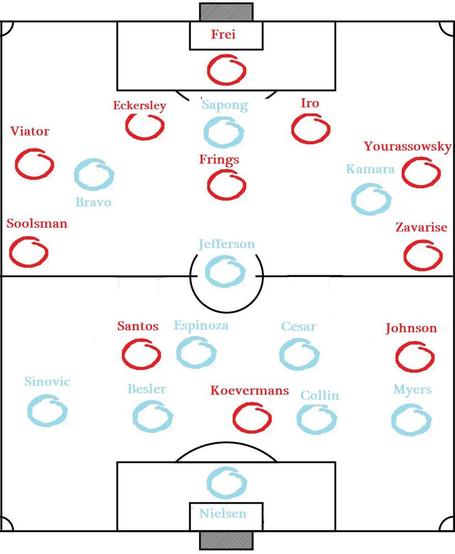 Sporting Kansas City Setup:
Coach Peter Vermes was able to put to use his new playmaker on loan from Vasco de Gama Jefferson. He patrolled the middle of the pitch and made several nice passes, including one assist to Omar Bravo. Bravo set up wide left but was often found more inside and up top. He made many dangerous runs behind the TFC defense on both of his goals. Rookie CJ Sapong started up top and was not involved hardly at all. He was substituted out early in the second half for teak Bunbury, who showed a better ability to hold the ball up to Sapong. Kamara played wide right but could often be found drifting inside and even at times on the left. He proved to be very dangerous for SKC, demonstrated by his two goals.

Espinoza and Cesar patrolled the middle in the hole in front of the back line. Espinoza particularly got forward, pushing the ball up the middle and made several nice passes, most notably his assist that led to Kamara’s second goal. They both proved to be aggressive ball winners. The back four played fairly well, with right back Myers torturing the TFC substitute left back Morgan in the second half down the right wing. Collin was injured and replaced by Cyrus, who had a rough go, and single handedly gave up one of the TFC goals.

Toronto FC Setup:
TFC coach Aron Winter set up in an interesting formation after making several changes in their home loss Wednesday night to FC Dallas. He played four at the back, with Eckersley getting the nod at right center back to pair with Andy Iro. At Left back, Yourassowsky started after having played left midfield Wednesday. He got forward quite a bit, but at the cost of Kamara getting in behind him and causing trouble for TFC. Frings sat in his accustomed position in the hole in front of the back four. He looked to distribute, but he still did not seem comfortable with his new team yet.

Santos played in the middle behind lone striker Koevermans. He made no positive impact in the match, often holding onto the ball too long before making up his mind where to go with it, and was dispossessed too many times for his coach’s liking, as he subbed him out just before halftime. Zavarise played on the left side of midfield with the speedy Johnson in front of him at left wing. On the right, Soolsma played alone in front of the right back Viator, who pushed far up the wing in support of Soolsma.

TFC Still Looking for the Right Combination:
It is clear that TFC is still looking at who their best players are after all of their recent transactions. Hopefully management and ownership give coach Aron Winter another season at the helm, as all of this roster change is not conducive to winning. Also it seems that it is not their strategy (variations of the 4-3-3) that is failing them, but the players who are trying to implement it. Now, that may be the fault of Winter, not playing to his players strengths, but if he is given time to find more players that fit his style of play, one can see his style being a breath of fresh air to MLS, where the vast majority of teams set up in some variation of a 4-4-2.

As for the game, TFC looked incredibly dangerous in the first 10 minutes, with Koevermans having 2 clear goal scoring opportunities, but he was not able to convert either one of them. This seemed to take some of the wind out of TFC’s sails, as they went on to concede 3 goals in a less than 10-minute stretch. Kamara was responsible for the first 2 for SKC, the first he biked in off of a deflection of an Espinoza corner, and the second he headed in another ball from Espinoza after beating Zavarise to the back post. TFC was getting torched down their left side, partially because Yourassowsky was pushed too far forward, and partially because they were giving SKC too much space in the center of the field. Santos in particular did not look to track back enough, and with Frings not in his younger days, he cannot cover the entire midfield by himself. SKC’s 3rd goal came after a bad Santos turnover that led to Jefferson playing a dynamite through ball to Bravo, who had gotten in behind Viator and Eckersley in some dreadful defending and an apparent lack of communication. Bravo then rounded the keeper to give SKC a 3-0 lead that reached halftime.

Santos was replaced just before halftime, and after his dreadful performance, it would be a surprise to see him play in their next game. SKC did much of their damage in the middle of the field where they had wonderful off the ball movement, and Winter should consider playing Frings in behind Koevermans where his distribution would be helpful, or playing someone along side of him because he was no able to cover the middle alone. The energy and enthusiasm of Plata was sorely missed, and if he and Johnson are able to man the wings going forward, it would make TFC’s attack much more dangerous.

Koevermans proved to be dangerous but he did not receive enough service to get into the match enough. He netted TFC’s first goal on a header after he beat the all-star Besler, and that was one of the few opportunities he had one on one with a defender in the air. It seemed as though TFC was starting to build some momentum to get back in the game, Myers beat the young substitute at left back Morgan down the wing and played a grounded cross to Bravo, who was completely unmarked and gave SKC a 4-1 lead with his second goal of the match. It was a nice ball by Myers and a good run by Bravo, but it was some truly dreadful defending by the TFC center backs. Iro was too slowly jogging back and Eckersley amazingly was not even looking as Bravo ran right past him for the goal.

The substitute center back Cyrus for SKC had a rough go, and it was his botched effort off of Frei, the TFC’s goalkeeper’s kick that gave Johnson an easy goal to make the score line a more respectable 4-2.

Conclusion
TFC is clearly still looking at who they want to move forward with, and with all of their recent roster changes, games like this are not unexpected, especially at a hostile environment like the one at Livestrong Park on Saturday night. As for SKC, it was a dominating performance, and their fans can only hope that they can keep up this form moving forward as they push towards the playoffs.