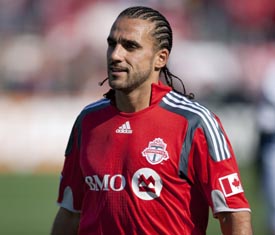 Hi, my name is John and I'm an ex-lover of Dwayne de Rosario...as a Toronto FC player.

I know there are those out there in Red land that still holds out their hearts for him, but I am no longer one of them. And you probably know why.

The moment that MeRo (courtesy of one Mr. Nav Dhanda...I think. Correct me if I’m wrong) decided to pull off that cheque-signing stunt the love affair was over. A love that once so passionate, was snuffed out with a cold slap across the face, a slap that stung like the north wind on a minus-30 degree Calgary winter day.

But before I start telling you more, I should probably go back to when the love affair started.


It was 2007, and the Reds were only getting started in the MLS, and a certain team called the Houston Dynamo was in town (I believe it was Canada Day), and there was certain dreadlocked striker on that side. Watching him, I was almost entranced by the level of skill he showed. The commentators, on their part, helped stoke that passion. Many Youtube videos like the one below later, I was in love.

Soon, there was a clamour amongst the kingdom for this man to come home. I joined that chorus, and soon he arrived. After two seasons of little reward, it was like hope had finally pulled into the station.

He was ours at last. To quote Bonnie Tyler we had held out for a hero, and finally he had finally come home.

For a while, it seemed all was right in the kingdom. Playoffs seemed like an inevitability, rather than an impossibility. But as year after year turned into this year, the love that seemed to be faded away. Sure, he was scoring goals by the bucketfuls but the team wasn’t getting anywhere. And for obvious reasons, the attention was all going to him.

Players were leaving left, right and centre and weren’t giving exactly glowing reviews of what was going on in the locker room. Detractors may say that it was of the management’s own doing (which was proven correct when Mo Johnston was fired, but that’s a whole different Fanpost), but one of the biggest culprits had to be MeRo himself.

As the love faded away, my eyes started wandering away to others while hoping deep down inside, redemption would come. But alas it was not to be, and the cheque-signing only sealed his fate.

Some of you might say that he was promised Designated Player money, others say he was deserving of it. Some say he was the heart and soul of the team, others say that there was no way he could have done it all himself; the list of these goes on and on like traffic on the Gardiner Expressway during rush hour. While all may have been true at some point, they are no longer now. We were wrong to have made him the centre, and we were treated in kind.

Like the selfish boyfriend/girlfriend, he sopped up the attention like a sponge, and we were grateful for whatever crumbs of affection he gave us. Sure, there was the charity work and all that – but at the end of the day, is he paid to do charity work? Does the ticket revenue go to charity? I think not. The man was paid to be a leader, and he failed badly in that regard.

I won’t be able to watch the match live on Saturday, but I know this: when I review the game on my PVR on Sunday night, I certainly won’t have much love for the man that once was a hero to so many. For all the heartaches we’ve had to endure, hanging on to someone who once was, will never salve the pain.

It’s time to let go, and enjoy the potential thrashing the Reds will lay on DC United and MeRo. For all we know, he would enjoy nothing more than to thrash the Reds, and lay more hurt on us.

More from Waking The Red