As a way of celebrating their 100th anniversary, the Canadian Soccer Association is doing a "This day in football" series on it's website, updated each week with historic moments in Canadian football history. Throughout the year, I'll try and highlight the events that catch my eye and go into a bit more detail.

One such thing this week is a mini tournament I never even knew existed, from 1995 right here in Toronto. That upcoming big game at the Rogers Centre is all the rage these days despite initial concerns about crowds and the fake grass and all that. So let's look back at some of the earliest soccer games ever played (maybe the first, can't find details of any earlier ones) at the then SkyDome, the SkyDome Cup.

The Skydome Cup saw reigning European Champions Denmark and up and coming Golden Generation era Portugal invited to play against Canada in a little three game tournament, the first game of which happened on January 24th 1995 with Canada taking on Denmark. The timing of the tournament in the middle of the European season meant that there wasn't a top quality level to the Danish and Portugese teams, but there's a lot of familiar names in the Canada lineup you see in the photo above, whether long serving players like Randy Samuel, Nick Dasovic, or Alex Bunbury, or those who'd go on to play their part in the 2000 Gold Cup win such as Craig Forrest, Mark Watson, Carlo Corazzin and Paul Peschisolido.

Canada lost the first game to Denmark 1-0, before playing Portugal in the second game on the 26th (2 days rest, way to give Canada the advantage guys!) highlights of which you can see below.

Canada's defending is pretty bad for Portugal's goal, an unnervingly dark haired Pat Onstad is clearly not happy with them. On the other hand though, Alex Bunbury's goal is a delightfully well placed header just inside the post. The crowd is predictably pro Portugal, and when Canada scores, those who are cheering, well you can tell it's Toronto in the mid 90's as almost everyone seems to be in Leafs or Jays blue and white. For all the concerns about modern fieldturf, check out that plastic pitch! It's like they just painted some concrete green. And used two different shades for some reason. Also check out that truly majestic mullet on Canada's number 7. I'll have an even better picture of it, as well as name and shame our hirsute hero at the end of the post.

Despite what seems to be reasonable prices of $9 to $25, the crowds are a bit disappointing, 10,024 for Canada v Denmark, and 13,568 for Canada v Portugal. You know where I'm going with this one right? Take out the home team, and the third game between Denmark and Portugal drew 23,700, more than both Canada's games combined.

That game saw an 89th minute Paulo Alves goal (check it out, a good end to end team move, and the Danish goalie looks genuinely gutted!) give Portugal a 1-0 win, and that result meant Portugal won the cup, a fact that is still proudly mentioned in their wikipedia page as the only tournament they've ever won.

Nostalgia's fun and everything, but it's good to look back and see how far we've come. Toronto FC have reportedly sold over 35,000 seats so far with more tickets opened up, and Beckham lovers aside, it's not about seeing some glamorous foreign team, or the old team from back home in a cash grab friendly. It's about an important and real game, and cheering on the local team, and it's actually selling out. For whatever reason, Canada games haven't caught the imagination at the same level yet, but it's slowly getting better in that respect in Toronto as well.

Like modern day Fieldturf, it still leaves a lot to be desired and can certainly be improved upon, but compared to how it was in the mid 90's things have hugely improved.

As for that mullet picture I promised you, with thanks to the Canadian Soccer Association, behold the glory that was mid 90's...Nick Dasovic! 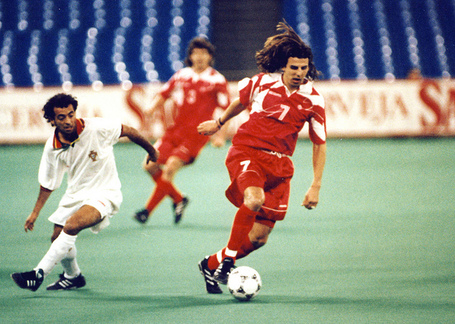