Toronto FC has a new Away Kit

If you buy something from an SB Nation link, Vox Media may earn a commission. See our ethics statement.

Share All sharing options for: Toronto FC has a new Away Kit

After a busy day of TFC news coming out yesterday things have refused to slow down today. After the club being unusually quiet for the first few months following the end of the season it was almost inevitable that at some point we would be overwhelmed with news from the team. That point seems to have arrived as today several sites began selling a new Toronto FC jersey.

Now the new kit has not been unveiled by the club and it is not available on the MLS shop as of now but it is for sale on World Soccer Shop which is a very reliable source for kits as they have never been known to sell a fake. So it is safe to say that this new Adidas kit is official and will be used by Toronto FC on the road for at least the next season.

The kit is sure to cause a fair bit of debate among fans because it makes a lot of choices in the style and design that are not really the safest option. For now it seems that the home kit will remain the same for the 2012 season though so even if you do not like this kit one bit you still have an option. It also seems that for 2012 at least there will not be a third kit for the club despite many fans longing for the club to add a black option once again for use in cup competitions.

This new away kit was based on contest entries that the club received and to be honest they have gone with a kit that is based on an entrant that I was not a huge fan of to begin with. This might be a case of the kit needing time to grow on me, and their are several things about it I do like, but on the whole I can't say I am a huge fan.

A break down of the kit follows after the jump.

The look at the new kit has to start somewhere and for me there is no better place to start then with the worst part of it. We are all familiar with what the Toronto FC logo is supposed to look like and that included knowing what colours it is supposed to be. So why then does the new away kit have a logo that is done in all red? It just does not seem right to me for the club to make changes to its own logo so that in potentially half their games this coming season they will be wearing an altered logo. With the shirt being done in all red and white for the most part I can see what they were going for by making the logo red but it just does not sit quite right with me. If they had instead used the clubs regular logo I feel that it would have stood out more on the shirts and actually provided a better contrast on a shirt that is begging for anything to draw the eye away from the sponsors logo. 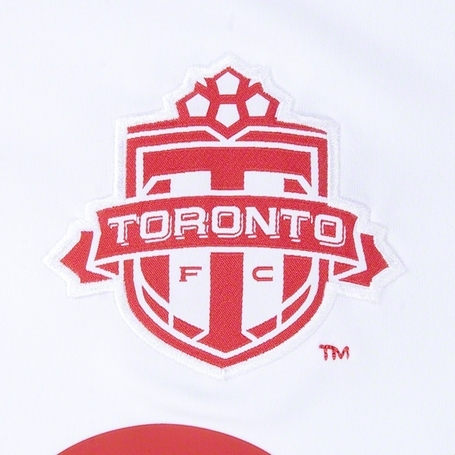 Most of the other design elements of the shirt are the expected basics. The shirt still has the BMO logo in a very large font across the front. The sponsor logo does seem to be a bit higher up on this kit though which actually makes it stand out that much more, which is a bad thing. As you can see in the picture above that part of a circle at the bottom is the start of the BMO logo so there is almost no space between the bottom of the club logo and the top of the sponsor logo. The shirt also included the MLS logo in its normal spot on the sleeve which is to be expected but the version now for sale on World Soccer Shop has no Canadian flag on the other sleeve. This alarmed me at first but then I remember that none of the replica jerseys have the Canadian flag on them and it is only the authentic ones that do. So that means when the club unveils the official jerseys that flag better still be there.

The design of the actual shirt is fairly simple but not really your standard shirt. Unlike the kit that the Montreal Impact launched several weeks ago this one actually stands out from the generic Adidas products which is one major plus. The shirt does have a collar which is often a choice that many fans do not like but for me the collar on this one works. It is a soft collar and the fact that it is not made into any kind of a V-neck is a good thing as the slit down the middle is fairly short. The other major feature of the overall design is that colour scheme. The choice to go with a white front and back with red sleeves and sides plus white stripes does look good from the front. The issues with the colour scheme come for me when you look at the back of the shirt. Maybe it will end up looking better when you see it on the players with their name and number on it but in pictures it just looks odd. To me the choice to bring the red from the sides of the shirt in towards the middle is where the problem arises. It ends of creating smaller spaces of white at the bottom of the shirt and the neck and leaving an odd shape of white area in the middle of the back. But you can judge for yourself on that one. 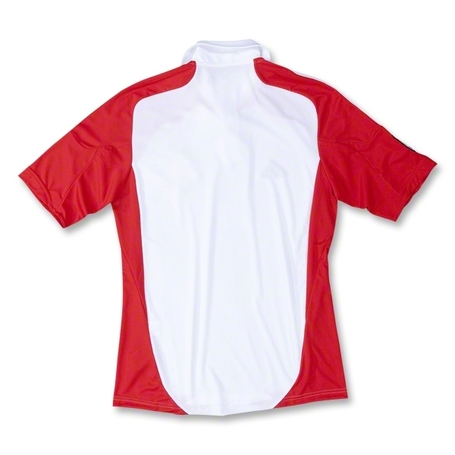 Despite all the concerns I have raised about this shirt it has actually managed to grow on me a fair bit as I have written this, beside the logo part. In the end if I had not just gotten a new home kit I would at the very least be considering going out and getting this one. At the very least though I remain open minded about it and look forward to see the complete thing on the players coming March when they return to the field. I do hope though that the club does not have some Euro style dance party to unveil the shirt, looking at you Montreal, but rather use an event like Friday mornings to do it quietly and effectively. The fan-fare is nice and all but the club should really be focusing its promotion efforts on more important things like working on filling the dome.

And one last photo in case you forgot this is what the club unveiled at last season's home opener so that should give a better sense of what the completed kit will look like with socks and shorts. Completes it nicely in my eyes but let us know what you think of it with a comment. 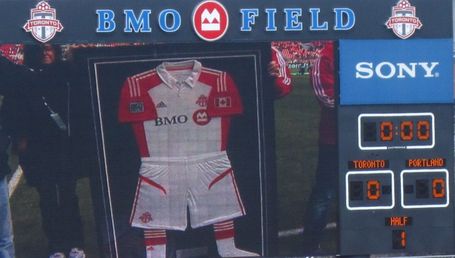