Earlier today Toronto FC hosted its big breakfast where they invited supporters to come out and have some complimentary pancakes with the manager and a whole bunch of players. It seemed to be a really enjoyable event for all those that attended and they even left with a bit of free swag. In the long run the most important news to come from the day was probably the announcement that the club has hired a new director for the academy in Thomas Rongen. In the short term though the real point of the event was to announce the plans for ticket sales in advance of the March 7 CONCACAF Champions League quarter final against the LA Galaxy.

Info had already been making the rounds to suggest that tickets would start at as low as $10 and supporters seats at $19 would be located in the south end of the lower bowl. Those numbers were both confirmed this morning along with all the other details and it is safe to say that Toronto FC has taken this game very seriously.

When the word came down that the match would be played at the Rogers Centre there was a far bit of nervousness about the club getting the prices wrong. With the Dome holding so many people, over 50,000, it was crucial that the club see the value of setting prices low and making sure that there is a good crowd.

All of those fears should now be dispelled with the prices being very affordable for most people and in many cases the seats are a fair bit cheaper then single game tickets to a match at BMO would be. The club will certainly be hoping that with such low starting prices they can get a lot of first time fans out and further expand its popularity in the city.

Tickets are set to go on sale starting Monday morning when there will be a pre-sale for season seat holders that will run until Thursday. That will be followed up with tickets going on sale to the general public next Friday morning. Season ticket holders will be able to purchase as many tickets as they like in whatever section at a lower price then those buying them in the general sale, so if you do not have your own season tickets, make sure to have a friend who does buy your tickets so you can get them early and at a better rate.

The seating chart for the match including prices follows. 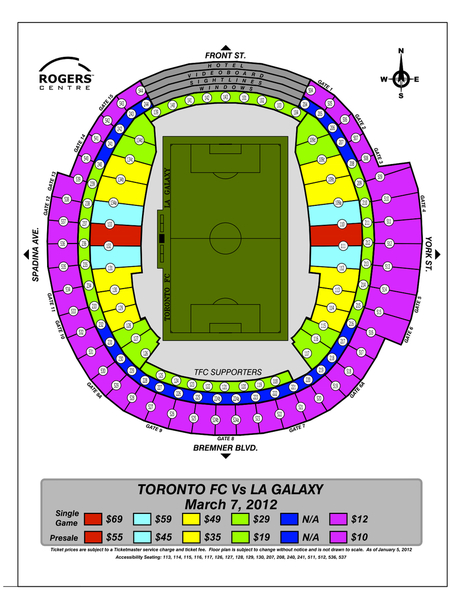 As you can see, all the prices for the game are really quite reasonable with only 2 sections reaching the high price point of $69 for general sale. That means for almost everyone attending this match, tickets will come in under $60 which is a great deal in Toronto sports. Consider the fact that Toronto Maple Leafs tickets start at $55 and that is for non-premium games, Toronto Raptors will charge you well over $50 if you want to sit anywhere other than the upper bowl, and even though the Toronto Blue Jays start at $11, if you want to get down to the lower bowl you are again looking at a price tag starting at $44 dollars for a non-premium game. On the whole, going to sports in Toronto can be really expensive, and that is without buying a single beer! This game bucks that trend though and gives the GTA sports fan an affordable alternative for at least one night.

So now there is really no excuse for the Dome to not be fairly full for this game, heck even a sell out is actually now a real possibility. The club is doing its part quite well so far with the price being right and apparently we can look forward to some solid promotional videos in the coming weeks. Now we the fans again have a role to play, after all we are the ones that will actually be buying these tickets. So if you have season tickets, take advantage of the discount prices and the saving of all service and handling fees and try to buy as many tickets as you can and invite friends even if you have to try and fill the seats after the fact. If you don't have a season seat get in contact with someone who does as the savings will actually be quite large when you consider the initial price is already a fair bit lower and then you avoid the other fees that often can be very nasty.

On the whole Toronto FC deserves a big well done on this. With the prices being set at the right range another major hurdle is cleared and we are just one step closer to the biggest TFC game ever and it will be supported by the biggest home crowd ever for TFC.