WTR Year in Review: Misplays of the Year

These are the moments that makes you scratch your head faster than a green snake on a sugarcane cake! Team WTR revisits some of Canadian soccer's biggest mis-plays of 2012 in part five of our Year in Review.

Share All sharing options for: WTR Year in Review: Misplays of the Year

It's been a season of lows and even lowers for TFC and Canadian soccer fans, and then there are those moments where even some of the most hardened supporters have to go, "What the...?" From some truly insipid defending, to some hilariously bad moves off the pitch, we were spoilt for choice in this category.

In Part 5 of our Year in Review, we look at some of those moments that made us stop, rub our eyes, and pinch ourselves if we were dreaming (and we're usually not).

Kristin - In All The Wrong Places: Coaching decisions that made me scratch my head - or bang it against a wall. Again a lot of choice here but I have to go with the curious case of Paul Mariner constantly playing players out of position when there were serviceable options sitting on the bench (or not as the shortened bench became a thing). And his refusal to play any of the kids that were dying for minutes that would help them develop that stands out for me. Not to mention the substitution wackiness.

John - I Swear Officer, I Didn't Mean To: I had briefly considered putting in the signing of Freddy Hall, but given the fact that this one was done by not one, but THREE players: Miguel Aceval, Nick Soolsma and Luis Silva...made it the one for my books. We all know the case, three players go out for a few drinks in Houston, get into a punch-up, get sent home. If it was under normal circumstances, it may have been overlooked. But at the point of the season where TFC was, it simply made it worse. But for some reason, we still got a point out of that Houston game.

And also, it might have helped in the process of getting rid of Aceval and Soolsma, but for the sheer boneheadedness of this move, the TFC 3 earns my vote. 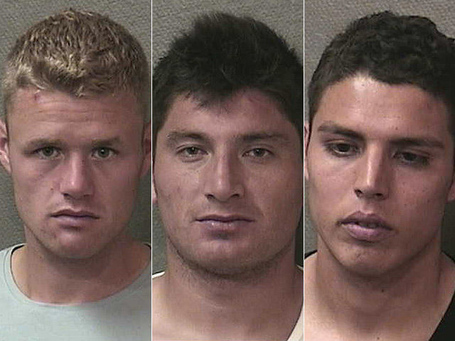 The faces of idiocy.

Duncan - The Paul Mariner Sideshow: After his ascension to the throne, Paul Mariner seemed like a man in over his own head whose method of coping was to just front it out, as if he said often enough that everything was going just fine and that he's actually really good, people would believe him, or at least stop calling him on it. The disparity between his comments and reality was often hilarious, and reached it's apex with his 'best finisher of the modern era' comment, which was just so massively, massively unfair to Andrew Wiedeman.

Everyone knew it was a salary dump to clear a DP spot, and maybe pettily settling a score with Julian de Guzman Many thought that de Guzman's contract was completely untradeable. Everyone would have accepted that Wiedeman was just a bit part, the proverbial bag of balls. A comment along the lines of 'he's a young kid with promise who hasn't quite got it together yet and maybe just needs a change of scenery for everything to click' and there'd have been zero expectation. He could have had the exact same season and people would have treated him totally differently, a general shrug of the shoulders with appreciation for his good moments and the goals he scored.

Instead, Mariner set him up to fail, with plenty of people taking a gleeful schadenfreude in his haplessness, and using it as Exhibit A of Mariner's cluelessness. Totally unnecessary.

Dave - It Only Took Less Than a Minute: My mind keeps on going back to that second leg in LA but I think that the Ty Harden own goal that leveled the score at 1-1 was about as bad of a moment as the team had this season. I will cut him some slack because Robbie Keane probably would have finished it anyhow which means that the opener from Chicago back in April gets the win here.

Milos Kocic rolled it out to Torsten Frings who got put under pressure by Patrick Nyarko all of a sudden and turns the ball over to Dominic Oduro who finishes inside of 30 seconds from the kickoff. Just a "shambolic" display from Toronto as a certain Arlo White called it.

Think you've got a bigger mis-play this year than the ones we picked? Tell us in the comments below. And vote in the poll, too!

Yesterday, we looked at some of the quotes that really marked the year, and on Monday and Tuesday we will be unveiling Team WTR's Heroes and Villains of the Year. Stay tuned.