WTR Year in Review: Villains of the Year

These are the ones you want to lob your rotten produce at for what they did this year! Team WTR picks out some of those who have receive (and should receive more of) your scorn from 2012.

Share All sharing options for: WTR Year in Review: Villains of the Year

In any aspect of life, there are people who make you want to cheer, and then there are those whom you'd rather simply pour a load of manure on, for whatever they did or say. While we don't condone doing that physically, Team WTR has selected a few individuals (and in some cases, things) that we wouldn't mind heaping some extra scorn on, for a myriad of reasons stemming from the events of 2012.

From the TFC season to the Olympics, we were again spoiled for choice in this category. Here are some individuals whom we're preparing our metaphorical rotten produce for.

John, Duncan, Kristin - Christina Pederson: Hmm, I should put some thought into this one, maybe 6 seconds worth...Oh, i know, Christina Pederson! I'm not going to say she cost Canada gold, as there was still a lot of football left to be played. With her bizarre decision to enforce a rule so little used that fans, broadcasters, journalists and even other players were shocked to see it used.

She may not have single-handedly handed the win to the Americans, but she absolutely changed the tone of that game, and completely overtook the narrative of an absolutely enthralling game that would have been one for the ages no matter how it ended. Instead it's all about her as the one that denied Canada, and another talking point in the argument by Canadian football fans of how the international football community has once again screwed us over.

The sheer amount of anger that she was able to generate in Canada makes her a prime candidate for this prize. And as you can see from the video below, that anger still abates...

UPDATE: Seem Royal Canadian Air Farce viewers agree with our sentiment -- they've awarded her one of the five "F-Bomb" targets for 2012 in the comedy troupe's New Years' Eve special. Congratulations! (Skip ahead to about 41 minutes if you want to skip the rest, but not recommended.)

Dave - Tom Anselmi: Villain of the year for me is one that if full of candidates but I think the best man for the job is Teflon Tom who just grated me in all the wrong ways with his press conference when Mariner replaced Winter. I still blame Big Tom for a lot of the club's issues so he gets this award even ahead of a certain Ms. Pedersen. Armen - BMO Field elevators: For those of you who don't use it, BMO Field has an elevator that takes you upstairs to the press rooms, boxes, and executive offices. It is also the world's slowest elevator, and, post-game, becomes packed with players and managers from both teams. There were days where I would be wedged between Jesse Marsch and Danny Koevermans, while Marsch was rambling about how Montreal deserved better - the whole thing is awkward, a tight-squeeze, and horribly, horribly slow. 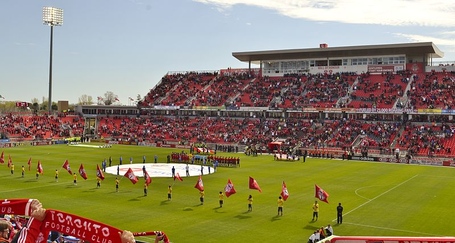 Even a part of the stadium is vulnerable to being a villain. Watch out!

All the bad referees, executives and slow elevators aside, we had a very diverse list. Here are some of the other candidates who got some dis-honourable mentions:

Armen - Geovanny Caicedo: He came in and convinced us all, without playing a game, that he would be the answer to our defensive problems. Certainly, he had Aron Winter convinced, though the results on the field said otherwise soon after. The problem with Caiceido is that he was a terrible footballer, whose credentials somehow convinced management to forego any more defensive rebuilding post-signing. He left soon after - what a shame!

John - Jonathan de Guzman: First you raise people's hopes, and even fooling your own brother in the process. Then we find it's more of your sick gaming to try to make yourself all the more attractive to the Netherlands, who is already stacked as a team. And what makes it worse is that you chose to tell people you were considering Canada while wearing...Canadian gear! And poor Julian, so eager, so happy to see you home. And then he ends up with egg on his face.

You're prancing in the Premier League now, but karma's a bitch, Jonathan. I'd get ready for your just desserts soon if I were you. Just think of what you told your brother (so much so that it got him excited to say what he said in the video below) when you finally take it up the yin-yang. Jackass.

Duncan, Kristin - The year 2012: What was supposed to be a year where it all changed, where the dream was
supposed to finally come true, where are hopes wouldn’t be unfounded for once turned into a bloody nightmare by the end of the fall.

Did we say the fall? Hell by the summer this was just a long march to death! No other year has so eroded our spirit as 2012 has. It was painful, disheartening, demoralizing and depressing to say the least. Oddly enough for us this came in a year where I’ve watched more closely and maybe that’s why it was so difficult - or maybe it’s just because for the most part - they gave up. It's year like that I hope to never see again.

Meanwhile, Canada was a swift kick in the balls, and over in England, Darlington went out of business, got relegated 4 divisions and didn't even get to keep the same name when they started up again. Even the good feelings story that is the women's team had a harsh fuck you in the middle of it. Good riddance.

John - Hope Solo: We all know she's an excellent goal keeper, but did you know she can also be a bitch, too? Caught with a drug violation (but wasn't suspended for the Olympics), and multiple cases of throwing her own teammates under the bus. Oh, and blaming Christine Sinclair's hat-trick against her on everyone else (a statement she would recant). And then there's the little Dancing with the Stars debacle -- and this is what Americans want as the face of women's soccer?

The smug that you get from the interview below makes me almost want to go to an oxygen bar to clean out your lungs! Poor, poor Hope...twice gold medalist, sad little girl. Boo, hoo, hoo. Don't bother crying me a river, I won't drink from it.

Armen - Brendan Rodgers: It's not so much that the Liverpool coach had to come to Toronto FC with his team during the mid-season friendly at the Rogers Centre - it's that Liverpool came in the first place. Liverpool? Really. While Barcelona and Chelsea were toying around with other MLS teams, Toronto FC played host to Liverpool. I know there's a large faction of Liverpool supporters in the city, but 2012 had the potential for something more (read: something better) and it just didn't pan out. I want, nay, demand Borussia Dortmund/FC Barcelona/Juventus next year!

Duncan, Kristin - TFC management: From the ongoing off the pitch soap opera (is Plata out on loan, who’s
watching the boys if they don’t have a curfew in Houston), to Teflon Tom’s smarmy presence at the Aron Winter firing (or is it resignation?) press conference. From Jim Brennan’s just plain odd appointment as assistant coach; to Mariner’s bluster, mis-use of players, outrageous statements and bizarre behaviour in the Town Halls all the way to Earl Cochrane who seemingly sat back and did nothing.

An epic shit show, and there's no one obvious moment of villainy or incompetence, just a slow, multi faceted fuck up, that somehow managed to be worse than the previous 5 years. No wonder Danny Califf wouldn’t come here last year Save us Kevin Payne, you're our only hope.

And now, a late addition...

John - Olivier Occean: If only he could have kept his trap shut for just three more days. In an unfortunate interview with Radio-Canada, the red-hot-in-the-Bundesliga-and-grossly-underperformed-at-the-Qualifiers Occean lashed out at the already gone Stephen Hart, calling his methods amateur, and in the process driving the bus over Hart, months after the fact.

Throwing more dirt on the metaphorical grave of a man who's already had his name dragged in the mud to cover your own sorry tracks -- If it wasn't so wrong, it wouldn't be here...but it is. Dear Olivier, if you actually played one iota like the highlight reel, you may have a point. Otherwise, people living in glass houses shouldn't throw stones -- especially when one of your own teammates disagree with you.

There's a long list of detestable people, for sure. But to wipe the bitter taste from your mouth -- tomorrow in the final part of the Year in Review, we will reveal the names of those who showered themselves with glory in 2012.

Oh, and of course -- if we've missed someone, vote in our poll below and let us know in the comments!