As part of their centenary celebrations the CSA is doing a "this week in Canadian Soccer" feature, and through the year, I'm going to feature some of the events that catch my eye. Over the next week, that means the 2000 Gold Cup. You know how it ends, Canadians sweeping the player awards and Jason de Vos accepting the truly gargantuan trophy from Sepp Blatter and Jack Warner, but that's for a week or so from now.

Canada's group consisted of them, Costa Rica, and oddly enough South Korea who were invited guests along with Peru and Colombia for that year's tournament, so it was a long shot for Canada to even qualify from their group, with the official tournament programme pretty much writing off their chances of even scoring, never mind winning a game.

Their first game was against Costa Rica, in front of what was recorded as a crowd of 22,131 but was probably a lot less than that for the majority of the game as most people would have been there to watch Mexico crushing Trinidad and Tobago 4-0 in the second game of a doubleheader. Carlo Corazzin was at the time plying his trade with Northampton Town in England's 'Division 3' (actually division 4, what they now laughingly refer to as League Two, sigh), and this tournament was really the high point of his career. He'd scored 3 goals in the previous October's qualifying round against Haiti, Cuba and El Salvador, and he was the hero in this game.

Corazzin's first goal was from the penalty spot in the 19th minute, equalising after an 11th minute goal had given Costa Rica the lead. He equalised again in the second half, a mere 3 minutes after the magnificently un-Costa Rican sounding Harold Wallace had put Los Ticos ahead again in the 54th minute, and 2-2 was how the game ended, a very creditable result for Canada. 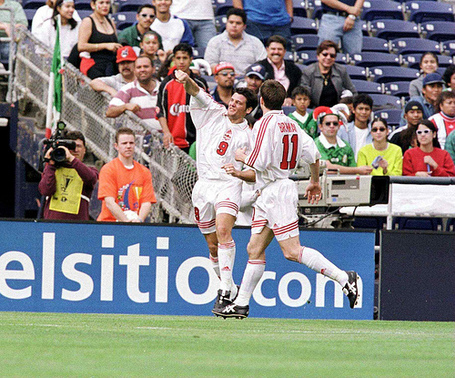 Two days later on February 15th, Canada took on South Korea, again as the first game of a double header, Trinidad and Tobago beating Guatemala 4-2 in the second game. Despite the short rest, it was an unchanged side that took on the Koreans just two years before they were to host the World Cup, and came out with another creditable tie, 0-0 this time.

This gave Canada a great chance to clinch 2nd place and make it to the quarter finals, a win for either side in the final group game between Costa Rica and South korea game would see them through, or a low scoring tie would get them through ahead of South Korea on goals scored. A 3-3 or higher tie would see Canada dumped to 3rd place. What we ended up with on February 17th, thanks to an 85th minute Costa Rica equaliser was a 2-2 tie, meaning all teams finished with 2 points, and a 0 goal difference. Costa Rica finished first due to goals scored, but Canada and South Korea had the exact same record, meaning 2nd place would be decided by a coin toss.

In this article from last year for the CBC, Jason de Vos describes it like this:

In the back of the media tent, our team huddled together as we waited for a signal from our head coach, Holger Osieck. The coin went up, came down, and after a quick glance at the result, a thumbs up from Holger sent our team into celebrations.

Remarkably, given that it's Concacaf and it's Canada, luck went Canada's way and second place was won. That set up a quarter final on February 20th against Mexico.