Last week James brought you an excellent preview of what to expect from the Los Angeles Galaxy in the first leg of their CCL Quarter Final against Toronto FC. Not all that much has changed in terms of what we should expect from them tactically speaking so now might be a good time to take a few minutes and read that post again.

So a week later what can we add to that discussion? Well we can take a few notes away from the first leg as well as LA's First Kick match against Real Salt Lake. The key point is that both matches showed that LA are in fact a team that can be beat. They may have a wealth of attacking talent at their disposal but without Omar Gonzalez their back four is looking quite suspect. They gave up two goals against Toronto FC and then allowed Real Salt Lake to score 3 goals in quick succession late in the second half of that game.

LA has also shown that they aren't as fit as Bruce Arena might have wanted his side to be with three big games at the start of their season. After going up 1-0 against RSL after the 70 minute mark you would have expected the Galaxy to cruise home with a win considering that they had not lost at home since 2010 but instead they found themselves with no answer for Real when they pressed. In the end RSL's 3-1 win was largely due to the Galaxy being wasteful with their chances while the visitors made theirs count as they rode a late wave of momentum.

Now Toronto FC is obviously not Real Salt Lake. That is a pretty obvious statement as their remains a clear gap between the two clubs in terms of skill as RSL is among the leagues top sides while TFC are still just looking to make the playoffs for the first time. That does not really matter though as Toronto can now take confidence in the fact that LA are not at their sharpest and they are in fact beatable at home.

For Toronto FC going in to the Home Depot Center is not going to be an easy task. One could actually argue that the Galaxy's defeat on the weekend is actually going to make things even tougher as the hosts will now be desperate to get back on track after two substandard results to open their season. They are a group that strives to be as close to perfect as you can so a draw and a defeat to start will not sit well with them. Add in the fact that they seem to be focused on winning a quadruple this season and you just know that LA are not going to make things easy on Wednesday night.

There is a chance though that Bruce Arena is going to be forced in to making a couple of changes to his squad for this game. He has gone with basically his first choice XI for the past two games so for some of them a third extended run out in just over a week might be a bit much at this early stage of the season. You have the likes of David Beckham who is no spring chicken, Landon Donovan who is recovering from illness that cost him much of his preseason training time, Robbie Keane who was busy with Villa, and several other starters who are all into their 30's now.

Wanting to avoid early fatigue Arena might be forced to make a couple of changes but with the team taking the CCL seriously there is absolutely no chance of wholesale changes. Rather, if anyone is likely to get the chance to cash in on early season fatigue it will be DC United on the weekend. For Toronto FC if they want to win at the Home Depot Center it is going to be against a strong LA side.

The question of fatigue raises an interesting question. Why were the Galaxy the only MLS team involved in the CCL to play on the weekend? While the Galaxy were busy losing to RSL the Seattle Sounders and Toronto FC were resting at home getting ready for their second legs. My initial thought was that LA was forced to play by the league since they are the poster club for MLS and first kick would just not have been the same without them. That did not add up though as LAG-RSL was not shown on a national broadcast so despite being probably the best game of the weekend it was not used as the show piece for the league.

Instead it has been suggested that the Galaxy only played on the weekend because they did not formally request to have their game moved. While Seattle and Toronto both formally asked the league to have the first week left blank to focus on the CCL it seems that the Galaxy did not think to do the same. One would imagine that with MLS being focused on having one of their clubs win the CCL any such request from the Galaxy would have been granted. If this really is the case there will certainly need to be some questions asked of how LA did not get the same treatment as the other two clubs and more importantly why their staff would chose to not even ask for the weekend off.

The reasons for why LA played on the weekend really do not matter from a TFC perspective at this point though. What does matter is that thanks to Landon Donovan's last gasp equalizer in the first leg, both teams will be going for a result in this game.

For LA the chances of winning were increased by the fact that they netted a pair of away goals in the first leg and would now be able to advance with a low scoring draw. That will not be their intention though as Bruce Arena has almost no track record of packing things in and just trying to grind out a result. They will likely be as attack minded as ever and will look to pop in a couple of goals to make sure things are beyond doubt.

Normally LA does a lot of their damage on quick counter attacks and you should look for more of that in the second leg. You can also look for LA to continue to exploit the wings. In the first leg they found a lot of space out wide as Joao Plata and Ryan Johnson did not do all that much tracking back. That allowed Mike Magee and Landon Donovan a lot of time and space on the ball which is not something TFC can afford to do again. Having Nick Soolsma and Julian De Guzman back will give TFC a bit more to choose from in the midfield but it is the main area that LA will look to exploit.

LA will also look to shore up their defending having given up 5 goals in 2 games. That may mean that Sean Franklin and Todd Dunivant will have to stay at home a bit more often to provide coverage for A.J. De La Garza and Andrew Boyens.

For LA, keeping Toronto FC off the score sheet will mean that they have to find a better balance in their defending. In the first leg they focused on keeping Danny Koevermans out of the game and silencing the big forward. That meant that they left all kinds of room in the attack for Joao Plata, Ryan Johnson, and Luis Silva which TFC were able to exploit early on to build their 2 goal lead. I would expect them to try and change that up a bit and pay a bit more attention to the others in Toronto's attack as the first leg showed that TFC clearly have more than one weapon.

In the end regardless of how tired LA looked at the end of their game against RSL they are not likely going to be resting anyone so a first choice XI is probable. You can also bet your last dollar that they will be up for this game and will be looking to put it away early and punch their ticket to the next round.

Here is a refresher on what lineup you can expect from LA and yes it is the exact same as what we predicted from them last week: 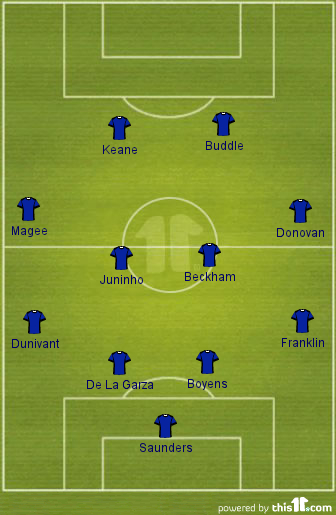