Share All sharing options for: Toronto FC v San Jose Earthquakes: The Rest of the West

The grass is going to be green and real, the seats are going to be red, and the fans and players are going to be exposed to the natural elements. That's right folks, Toronto FC is coming home to BMO field this Saturday when they kick off their home MLS campaign with an afternoon clash against the San Jose Earthquakes.

As fun as it was being part of a crowd of nearly 48,000 people at Rogers Centre there is something special about heading back down to BMO for the first time in nearly half a year. Even if you are not able to head down to BMO on Saturday there will be plenty to nervously look forward to with the Reds chasing their first points and win of the season.

We have been over the Frings injury and what Toronto FC might do to deal with his absence already so I will try to avoid that and just focus on the game at hand. Torsten Frings will not be the only player unavialable for this match though. The injured list still includes Adrian Cann, Dicoy Williams, and Jeremy Hall (technically Nicholas Lindsay as well) and when you add in Doneil Henry and Matt Stinson who are away with the Canadian U23 team Aron Winter's options are just a bit more limited.

James already brought us a great look at the enemy in this game but the real short version of that is that TFC is going to need to find a way to deal with San Jose's forward combination of Chris Wondolowski and Steven Lenhart. Wondo has scored over 15 goals in each of the past two MLS seasons and also boasts a very impressive record at BMO where he has scored four times in his last two visits. That is a trend that Toronto is going to have to put a stop to if they want to get something from this match.

For Toronto FC with Frings out the pressure now shifts to the other members of the squads veteran core. Starting at the back there will now be increased pressure on Ty Harden and Miguel Aceval to provide the leadership and organization that will be needed in defence. Aceval has been solid so far this season but now he will be looked at to marshal the back line and that will mean having to find ways to overcome the Spanish to English language barrier between him and all the other defensive options.

There will also be added pressure on Terry Dunfield and Julian De Guzman. Chances are that one, or possibly both, will be asked to play deep in the midfield and basically sit right in front of the defense. If Dunfield is in that role the biggest question mark will certainly be his ability to turn things from defense to attack. It is all well and good to be able to make a tackle and win the ball but if he can not provide the link between the keeper and the defenders and the four attackers it will be a long day. The same is true for De Guzman who will be looked at to lead the midfield, be a ball winner, and bring things forward when he gets the chance. The problem with asking him to do all that is that so far we really have no clue what kind of form he is on. JDG missed most of the preseason to be away with team Canada and then he was suspended for the first leg of the CCL quarterfinal against the LA Galaxy. Now though, he is going to be in the XI for almost every game while Frings is gone and he will have to be on form to soften the blow. He ended 2011 playing his best ever soccer since joining TFC as a DP so if he can return to doing that all of a sudden things are looking better.

Then up front all eyes are going to be on Danny Koevermans. If Wondo is the big threat for San Jose then Koef is the equivalent for Toronto FC. Koevermans is yet to open his scoring account for the season and has often left games early which is a bit concerning for fans. If he gets his name on the score sheet in this one that will all be quickly forgotten and it will hopefully be the first of many for him on the year.

Even if Koef is again held off the score sheet Ryan Johnson should be ready and able to pick up that slack. The former Earthquake attacker is showing no signs of slowing down his scorching hot start and should again prove to be a handful for San Jose's defenders.

The Earthquakes may have only conceded 1 goal in their first two matches of the season but they have not faced an attack like Toronto FC boasts this season. They have a 1-0 win over the New England Revolution and a 1-0 defeat to the Houston Dynamo but they have only trailed for a brief time this season which has allowed them to stay very tight defensively. If Toronto can get on the board early it would really force the visitors to open up and expose themselves to further damage.

It will be key that who ever out of Koevermans, Johnson, Joao Plata, Nick Soolsma, Luis Silva, Eric Avila, and Reggie Lambe form the attacking 4 makes any early chances count. Getting the fans behind them and opening up the compact Earthquakes would go a very long way towards bringing home a solid first 3 points on the season.

This game will be a bit of a homecoming for at least one San Jose player as former 2nd overall SuperDraft Pick Sam Cronin comes back to Toronto. Cronin, was selected by the club in 2009 before eventually being traded for allocation money. He is now a solid MLS player even if he never quite lived up to the promise that saw him selected so high in the draft. He should start for SJE in the holding midfield role and could have a very interesting battle with either Silva or Avila in the middle of the park.

Another former Red, Alan Gordon, will likely not make it back from off-season surgery in time for this match. He is not officially ruled out but having only returned to full practice on Monday it would be a bit much to expect Frank Yallop to throw him right in to the mix. That surgery he had was a bit of an interesting one as after it took place he was very vocal in singling out Toronto and its medical staff for not dealing with it properly and having him play much of the season injured. Gordon was limited by the injury after being deal to San Jose and eventually had his season cut short to go for the surgery. Add in Nana Attakora and Jacob Peterson no longer being in San Jose and that Ryan Johnson trade is suddenly looking a lot better than it did at first.

So how will Toronto line up? Well, that is a bit of a tricky question because you have to consider that they have another game on Wednesday against Santos Laguna which will be a huge test in the CONCACAF semifinals. This game is also the start of a stretch that will see the club playing 4 games in just 14 days so squad rotation will be key. That said I think Toronto will want to get points on the board so should see something close to the first XI for this game. Here is my best uneducated guess: 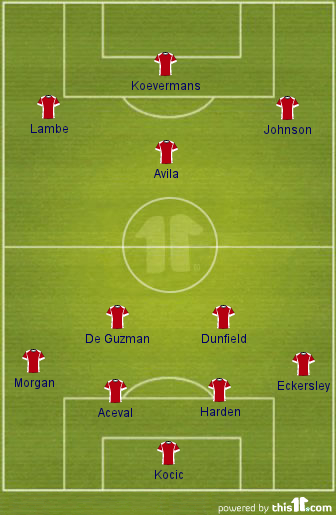 In the end, regardless of who is on the field this is a game that Toronto has to look at as one they need to be winning. The games against Santos aside this is the start of a very manageable stretch which the club needs to cash in on if they want to be serious playoff contenders this season. A win is also key as it will help avoid the feelings of doom and gloom with which fans are all too familiar from creeping back in. Setting the tone early will be key against a beatable San Jose and from there it will just take a solid team effort to get the job done.