CSA Centenary celebrations details, and a new (and blue!) jersey.

Share All sharing options for: CSA Centenary celebrations details, and a new (and blue!) jersey.

All Toronto's footballing literati descended on BMO Field today for what was really 3 press conferences in one, or as John Molinaro rather dismissively sees it, to pick up some free merchandise. First up was the CSA announcing details of their Centennial anniversary celebrations leading up to the June 3rd friendly against USA at BMO Field. That was followed by Stephen Hart and Peter Montopoli taking questions about the upcoming games, and then Umbro Canada unveiling the kit that will be worn by the men's team against the US, and by the Women's team on June 30th when they play the US down in Utah, though apparently not when they play China in Moncton on May 30th.

Details of the centenary celebrations can be found here at the CSA's website, but apparently include plans for events in every province, and then 10 days of celebration which include counting down the top 10 moments in Canadian soccer history, as well as revealing, rather oddly, the Teams of the Half century (1912-1962 and 1963-2012). Presumably it's split up that way so as to not interfere with the reveal of Canada's all time starting XI (men and women) which will be decided by online voting, which is in no way asking for all kinds of fiasco and accusations of regional bias when all is revealed, oh no. All I have to say on the matter is that hey, at least we don't have to worry about Whitecaps or Impact fans voting their team's players in, because, well, you know, and also, if Darlington legend Jason de Vos doesn't make the team, you're all dead to me. Dead.

Stephen Hart then gave the same old non-committal answers to the same old questions about a lot of things. Jonathan de Guzman and David Hoillet, well he gave the impression of being fed up trying to persuade them, he's made it known they're welcome if and when they're ready and can sort out citizenship issues, and now it's all in their respective courts. He thinks all 3 teams they're facing present different challenges, but singled out Panama as being very consistent due to the way a lot of players have come through the junior ranks together and become very familiar. Aside from that, if you've seen or read about one of his press conferences, then you already know it. It was also revealed that ticket sales for Canada's 2 games in June have now reached 10,000 after what was called a significant recent uptick.

Then it was on to the kit, I'll have pictures of that and some of the details below the jump, then come back and tell us what you think in this handy poll!

First up, the full kit, as modelled by Kara Lang, Ashtone Morgan, Doneil Henry and Jim Brennan who's hiding behind Gerry Dobson's head, and with Stephen Hart in a jacket from the same line. 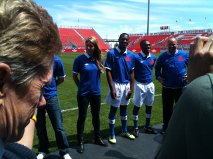 Next a couple of detail shots, first of all the Maple Leaf, and hopefully you can see the O Canada soundwave in the collar again. 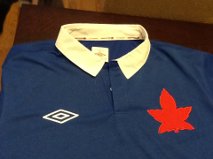 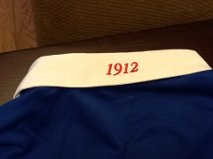 The main thing that jumps out obviously is that it's blue, which just seems instinctively wrong, but hey that's how they did it back on June 27th 1925, and if you're going to come out with another new jersey, which makes 3 in 16 months (5 if you count the away kits) and it's for a special occasion, you'd better do something different with it.

The first game Canada's Men's National Team played on home soil took place on June 27th, 1925, where Canada defeated the US 1–0 at Alexandra Park in Montreal with Ed McLaine scoring the only goal. Taking inspiration from the uniforms worn by Canada on that momentous day, the new jerseys have been designed in royal blue with white trim and boast a large maple leaf on the breast. Umbro’s tailoring and smart styling is predominant in this shirt with subtle contrast details on the neckline and shoulders.

They're already on sale, with a limited edition of just 1912 being made, and very reasonably priced at $59.99.