Share All sharing options for: Know Your Enemy: New England Revolution - Meeting the Second (Part One)

It’s been a hectic week at BMO Field.

Shedding a disappointing performance at Philadelphia last weekend, Toronto FC overcame Canadian rivals Vancouver in an exciting midweek affair – a match many consider one of the best league-wide this season, while a variety of roster moves – loans, the dreaded mutual consent cancellation, and of course, shipping the club’s first designated player out of town – have reshaped the club dramatically in the past seven days.

Much has changed, but what remains consistent is the daunting schedule of two matches a week.

Saturday evening TFC faces the penultimate league match of the current ten-game marathon in New England against the Revolution.

It has only been three weeks since the clubs first met, not much has changed from the previews – Part One and Part Two – of that match, but still, a closer look at the Revolution is in order.

Jay Heaps’ New England-side has only played two further matches – yes, New England has played two, in the stretch that TFC has had five, ah, scheduling - since the 2-2 draw in the final seconds at BMO field saw them extend an unbeaten streak to three matches. That run has stretched to five games with another last-minute equalizer against Seattle and a victory over a beleaguered New York, both at Gillette Stadium in Foxborough, Mass.

Seattle came into the match riding a difficult winless stretch of seven straight matches, all of which had seen them concede the opening goal. This night would be no different.

New England, having wasted two decent chances in the first ten minutes, caught a break in the twelfth.

Sharlie Joseph advanced the ball up the pitch to Saer Sene, he in turn fed Blake Brettschneider who turned to face goal, worked his way to the right along the top of the box and attempted to get a shot off. The Seattle defenders quickly closed him down, blocking the shot, but the rebound fell nicely for his continued run around the outside.

Brettschneider then sent a low diagonal ball into the centre of the goalmouth for Sene to tap into the open net. The Seattle back-line and keeper raised their arms looking for a flag – one which possibly should have come – but the goal stood, New England took the lead.

Annoyed by this turn of events Seattle came to life, scoring twice in the next twenty-three minutes, both from Eddie Johnson - his sixth and seventh of the season – both headers from crosses.

Mauro Rosales provided for the first, Florian Lechner’s attempted cross-field ball was cutout and worked back to him at right-back, hoping to pick a better outlet ball on the second attempt he delayed too long, allowing the lurking Rosales – unnoticed wide on the left – to steal in and snatch the ball off his foot.

Rosales touched it back to Alex Caskey, who returned it quickly. Rosales then took a touch back himself, evading the retreating run of Clyde Simms and making space to send a curling right-footed delivery clipped to the far-post.

Johnson, having recognized Rosales’ intention – video provides evidence of eye contact between the two: see below – drives towards that same post, on the inside of the defending full-back Chris Tierney, leaving him trailing, in no position to challenge. Rising to meet the ball above the six yard box and directing his header down and back across the keeper, Matt Reis in goal had little chance of getting a touch on the effort.

It was the turn of Marc Burch to provide the second, collecting an over-hit cross from the opposite flank and finding himself in acres of space on the left his left-footed out-swinging service picked out Johnson again at the far-post on the edge of the six.

Leaping over AJ Soares and with Reis, again, rushing out towards a ball he had little chance of collecting, all Johnson needed was to touch the ball towards the target - which he did – keeping it down and on frame to nestle in the netting in front of him.

The next half hour was largely uneventful; New England began to make attacking substitutions – Kelyn Rowe, Fernando Cardenas, and Diego Fagundez all joining the fray, while Seattle, exhausted from midweek exertions against San Jose in the US Open Cup, sought to hold onto their narrow advantage.

It appeared the Sounders would weather the storm until in the ninety-fourth and final minute of play; a hopeful cross-field punt from Stephen McCarthy found Cardenas in space on the right, allowing him to send a desperate final cross into the heart of the box.

Sene rose highest to meet the ball above the far-post, but was challenged by Zach Scott and fell away. Fagundez and his knack of being well-positioned on such occasions emerged from the shadow of the big Frenchman to nod the ball down and back across the moving goalkeeper, into the back of the net – 2-2.

Two straight ninety-fourth minute equalizers; a child with a red Mohawk in the stands went wild.

A week plus a day on, New England returned to the synthetic greens of Gillette – the best a man can, oh… - to host a depleted New York.

Shorn of half their first-choice side, Red Bull could muster little challenge falling 2-0 on the night.

A series of early home chances eventually led to the opener, Chris Tierney on the left used a Sene run into the box to open up space at the top before playing to Lee Nguyen hovering in space near the arc. His low, right-footed shot snaked through a crowd and past Ryan Meara in goal at the left-post.

Each side struck woodwork on either side of half-time: Soares sending a Benny Feilhaber free-kick off the bar bringing about an almighty goalmouth scramble before being cleared, and Kenny Cooper maneuvering up the left, before cutting onto his right-boot and rattling a shot off the top of the far-post.

But the match was over, made official when recently signed Honduran Designated Player Jerry Bengston netted his first for his new club, placing the ball into an empty net for one of the easiest debut goals in recent memory.

Joseph dinked a ball over a static New York backline for Sene to run onto down the right. Meara was off his line in a flash to challenge, but could only get a piece of the lifted shot, rebounding towards the centre into the path of Bengston.

Symbolic of a rundown opponent, New York defenders, caught out by Joseph’s pass, made no effort to get back, allowing the Honduran a jaunty trot towards the goal-line unfettered.

Of some import to the upcoming match, Rowe was suspended by the disciplinary committee for a clash with goalkeeper Meara. Accused of leaving a boot in, catching the face of the keeper as the two stretched to collected a loose ball in the box, Rowe will miss the match on Saturday; a decision that left Heaps fuming, incredulous at the punishment levied.

The only major question mark heading into Saturday is which keeper will get the start. Matt Reis was rested against New York after playing every league match this season and Bobby Shuttleworth was handed his first MLS start of the season.

Having performed very well, particularly in dealing with aerial balls into the box – a weak point for the defense and Reis, in particular – Shuttleworth will likely retain the position, though it would be no surprise if Reis were to return.

Heaps has tinkered with his formation a bit since the last meeting, opting for a lone striker and a five-man midfield – once a 4-2-3-1 and once a 4-1-4-1. An injury saw Joseph sit out the last match, but with Rowe suspended and Joseph fit again, it is expected they will return to the 4-2-3-1.

The projected lineup is as follows: Shuttleworth in goal; from right to left – Alston, McCarthy, Soares, and Tierney across the back; Simms and Joseph sitting with Sene, Feilhaber, and Nguyen across the midfield, and Brettschneider up top. 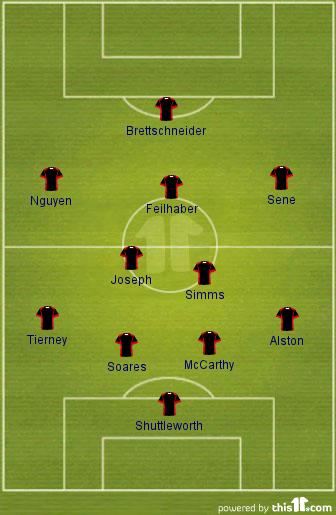 Sene has been shifted from striker to wide midfield, functioning on either flank. He and Nguyen will likely switch sides when it suits them; in the New York match, Sene played the entire second half on the right, having spent the first on the left. His fluttering between the midfield and the attack has been integral to the New England forward movement of late.

Jose ‘Pepe’ Moreno is nearing fitness, but will likely only see action from the bench if required. Lechner has proved valuable at right-back in recent matches, but Alston remains the preferred starter.

It is entirely possible that Bengston will be handed his first start and will almost definitely play some part in the match. In his limited action, he has shown he likes to drop deep and get involved in the build up from his striking position. With defenders moving up-field to mark him and Sene blazing the opposite direction this duo will cause plenty of trouble.

Bengtson will be leaving the side to join the Honduran squad for the upcoming Olympics shortly, and whether Heaps desires to get minutes out of him before then, or ease him into the team is difficult to foresee.

Fagundez too, will certainly play some part in the action, having started against Toronto he entered as a substitute in the subsequent two matches and performed well.