Toronto FC vs Liverpool. A meaningless friendly? Not necessarily.

Share All sharing options for: Toronto FC vs Liverpool. A meaningless friendly? Not necessarily.

With just a few brushstrokes one Toronto FC supporter captured the sentiment of a fanbase as we head into this weekend's "Match" against Liverpool FC.

The sign read "Silverware Not Friendlies" (as seen in this article here).

For many fans, this weekend represents everything wrong about this club. Time taken out of a season for what amounts to a profit fundraiser for the team's much maligned owners, Maple Leaf Sports and Entertainment. Players risking injury to compete in what? A meaningless exhibition game mid-way through the year.

Now, while I agree wholeheartedly with that sentiment and have voted with my wallet to stay home, attend to fall off the bone ribs on my smoker and frolic in the pool... yes I used the word frolic... I do think that calling games like these meaningless isn't quite true. For a lot of the players that play in this game, I think this is a big moment in their lives.

For many of these players, playing in a top flight league may have been a childhood dream. While I'm not one to quash dreams, the reality is that the vast majority of Major League Soccer players will never see those dreams realized. A game like this provides the competitive genes with a chance to line up opposite some of the best in the game, even if they are reserves.

The net benefit of these games to some players won't be a new contract. Their performances likely won't make headlines. The real benefit to them are the memories and stories that they will tell their kids and grandkids long after their boots are hung up.

Never was that more apparent with than in 2009 with then 20 year old Gabe Gala. Gala, a mid-fielder born in Nigeria had been with Toronto since 2007. He now plays in the Canadian Soccer League with the Mississauga Eagles. However, in August of 2009, this diminutive player lined up against Real Madrid and late into the game, he scored (3:45 in). The celebration that ensued was as genuine and emotional as I have ever seen, one that he will remember forever.

In its brief history, Maple Leafs Sports and Entertainment hasn't done a lot of things right. The teams on the pitch struggles are well documented, but even off the pitch there have also been problems. Dwayne DeRosario would blast the club a short time later saying "They wouldn't do even little things to help players out, like finding a flat. One player is commuting from Niagara Falls. Others are taking the bus to practice. I ask for tickets to games for my family. They won't help me out. I scrounge them up myself. And I'm talking eight tickets, not twenty."

However, with respect to Gala, they did do one little thing right. In the fall of 2009, with the season put to bed, Gala was a guest at a TFC Pub Crawl . There he was presented with a Real Madrid jersey, signed by all members of that club to mark his big goal. 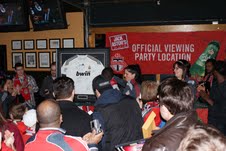 I had an opportunity to talk with Gala about his goal. When I asked him about how it felt. "Amazing" was the word he chose but his ear to ear smile showed that this is a memory that is going to live on forever.