The Call for a Reset

Share All sharing options for: The Call for a Reset

There has been a lot of talk among Toronto FC fans that they would like to see season ticket prices for the 2013 season returned to the level that they were at when the club first took to the field back in 2007. In that inaugural season you could get your seat for the season starting at just $200 for an adult. In 2012, that low end price was up to $399 for a single seat in the south stands. That is as good as a 100% increase over six seasons even with the price freeze being offered in recent years. That rate of price increase seems ridiculous but the fact that TFC still sold out most of the sections of season seats, even this year, goes to show that that demand was still there,though nowhere near as much as years gone past, with the previously much vaunted waiting list pretty much squeezed dry.

Now though, with the product on the field at an all time low and the number of fans in the seats also hitting record lows, it is obvious that something has to be done to address the discontent among the fan base. We have already had a look at what a loyalty based price adjustment could mean for TFC fans and their prices in the coming season but what would a price reset back to 2007 levels really mean?

A price reset to the levels of 2007 is not the most wide spread of the calls among fans and it is certainly one of the more extreme ones that is being made but the point is that fans are reaching a point in their levels of discontent that they are looking for more than just a token financial gesture. The call for this sort of price drop is about a serious gesture of good will to fans and a reward for their patience over the years, but what exactly would it mean dollars and cents wise?

The greatest savings would actually go to the loudest part of the stadium as the south stand has seen the biggest percentage increase to their ticket prices over the years. They remain the lowest price point at BMO but have doubled in cost since year one. The more engaged fans agitating for a price decrease generally frequent the south end so on the surface a reset would certainly go a long way to appeasing the vocal minority.

Around other parts of the stadium the price increase has not been quite as high percentage wise. A light grey seat has gone from $240 up to $437 which is about the same in terms of dollar increase as the south stand, having gone up by just under $200. In medium grey the change is again just under $200 as it has gone from a starting price of $500 to a 2012 price of $684.

The price change in the red sections is smaller percentage wise but when it comes down to the dollar amounts it is a bigger change. In dark red the original price was $1060 and now it is $1330 which is an increase of $270 for each seat. In the light red (club seats) the price was originally $1400, plus a $300 annual club fee, and now that price is at $1691, plus a club fee not included on the seating chart. So even if the club fee has not changed that is basically a $300 price increase for the high end seats.

That would leave just the north stand which did not exist back in 2007 to figure out. That stand has already had issues with being priced wrong and the club struggling to sell season seats there, so getting it right would be the biggest challenge of all. If the price is much higher there than in the light grey sections fans will once again buy the light grey seats and leave the light blue seats in the north as the last section to sell. For this season the north stand's light blue seats were sold at $589 which was $150 more than the light grey seats and led to them once again selling a lot fewer season seats in those sections. If you wanted to apply a similar decrease to both of those sections then the light blue seats would go down to something in the $390 range giving you a similar savings of around $200 for each seat.

What exactly would a price reset mean then. For fans it would quite simply mean savings of anywhere between two and four hundred dollars on each seat which would certainly convince a fair few disgruntled fans to change their minds about renewing their tickets for 2013 and beyond. Problem is that for the club, cutting prices by such a large amount would be a huge hit to their bottom line and the move would be a drastic one. Fans have been unhappy in the past but have continued to buy tickets even if all the club offers is a price freeze.

The call to reset the prices back to the 2007 levels seems to be asking for far too much from the club. If they are selling in the range of 14,000 season seats each season and they drop the price for each seat by at least $200 you can do the math on the amount that they would be giving up. Most of the fans who are calling for a reset could be retained by a much less drastic price drop from the club so going with a full out reset to appease a vocal minority would quite frankly be a bad business decision when it comes to the bottom line.

At the end of the day, MLSE is going to have to look at the dollars and cents of things and come up with a plan for season seat renewals that will find the balance between bringing in as much money as possible for them and keeping as many butts in the seats as they can. Another price freeze would probably result in the club seeing their first real drastic drop in the renewal rate which would be fine but for the fact that their once crowded waiting list is now pretty much depleted. A price roll back of some kind for renewing seat holders is going to be needed but if you are hoping to get your seat for what you had to pay back in 2007, then you should probably prepare to be disappointed when the club does finally announce renewal prices.

For your own comparison here are the seating charts for both 2007 and 2012 giving an indication of both price and which sections were sold out. For a perspective on what might work as a happy medium in this discussion Duane Rollins has you covered over on CSN where he proposes his own pricing idea that would appease both fans and ownership based on 2007, 2008, and league wide prices. 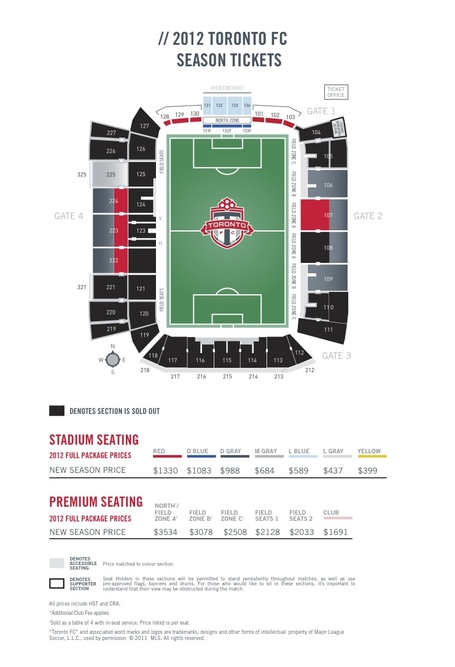