Where Are Canada's Soccer Pubs?

Canada has just than six soccer pubs....wait, what? That's according to American blog Wrong Side of the Pond. Know a place? Find out how to help out here.

Share All sharing options for: Where Are Canada's Soccer Pubs?

Try as they might to convince you otherwise, the NHL and the CFL does not command all the attention at every bar and pub in Canada. There is a soccer pub in every city -- but where they are, and how much they show? That's been a question that has long dogged supporters and fans alike.

Wrong Side of the Pond is trying to put together such a list, and from what you can see above, they currently have a paltry two listings in the Toronto area, and four others in the rest of the country. Clearly, you see where there is the disconnect -- there has to be more than six soccer pubs in a country of 34 million people. Right?

If you can, let's do our part and help them out! If you know of a place (and I know a number of places in Toronto alone that aren't on here...), send it in. Let's fill up that Canadian half of the map! 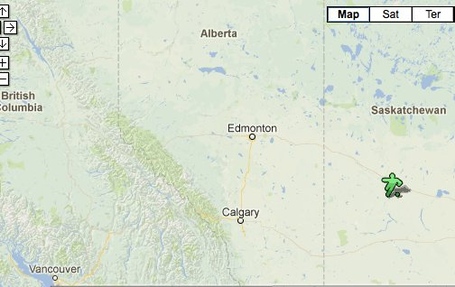 Yeah, the situation in the west isn't any better...help them out!