Are you smarter than Aron Winter? Round 17

Predict the score of Chicago vs Toronto and win, win, win!

Share All sharing options for: Are you smarter than Aron Winter? Round 17

It's squeaky bum time with just two games remaining and only 3 people in with a chance of winning. So, let's remind ourselves of what we're playing for this time around. An odd collection of stuff, most of which is full of Winter based nostagia. There's the 2011 end of season yearbook, promising all sorts of great things in 2012, as well as the 2012 one. There's the programme for the peak of Winter's time here, that game against LA at the skydome, as well as the programme for his last game against Philadelphia. His notes included: "I feel after the cup win on Wednesday this is the right opportunity to turn things around. We want to head into the international break with two consecutive wins....Regardless I always keep the faith in my players and what we are doing here." Aaaaawww.

Also, more randomly, the LA Galaxy 2008 media guide, in all it's Alexi Lalas and Ruud Gullit glory, and also pink MLS sweatbands and laces just like the players are wearing right now to promote breast cancer awareness. All pictured below. 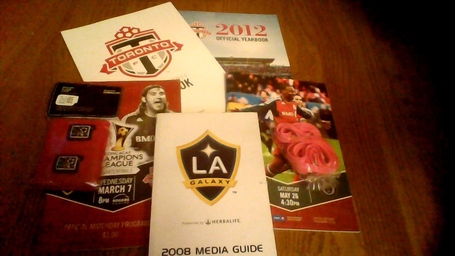 So, can TFC get the win? Can Stefan Frei show us all what we've been missing? Or can Operation Screw Montreal proceed according to plan and Chicago get the 3 points? Who knows?