The York University Lions are the number one ranked men's soccer team in the country and it is in large part due to a handful of players on their roster with connections to Toronto FC including former home grown signing Matt Stinson.

The York University Lions are the number one ranked men's soccer team in the nation. Their record in OUA play this season sits at an impressive 9 wins and 1 defeat with 38 goals for and just 5 against. That impressive record has them sitting in first place in the OUA West conference with less than half of the season left to play.

There success has a lot to do with a strong connection to Toronto FC on their roster. Not only do they have players like Mark-Anthony Kaye, Jonathan Lao, and Dylan Sacramento who have all been members of Toronto FC's academy at some point in time but they also have former TFC home grown signing Matt Stinson and their Head Coach, Carmine Isacco, who has spent time coaching at Toronto FC and with the Canadian U-20 program.

York has a roster packed with talent and it shows on the scoresheet. Ten games into the season the Lions are being led in scoring by Kaye and Lao who have both found the back of the net on 8 eight occasions. They also have 4 goals from Sacramento who has been splitting time this fall between playing for the school and for TFC's senior academy team which has limited him to just 5 appearances.

On the weekend, Matt Stinson opened his scoring account for the school as he scored the winning goal in a 2-0 win over the Western Mustangs on Friday night. If that goal is a sign of things to come the rest of the OUA should be worried as Stinson is just starting to round into form having now made 5 appearances for York. 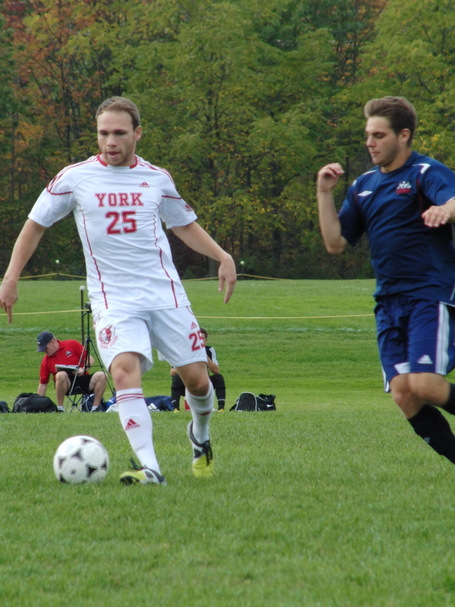 Matt Stinson was released by Toronto FC earlier this year but remained on the books for MLS throughout the summer which left him unable to move to a new club. He was able to have his amateur status reinstated though but did lose a year of eligibility due to his time playing as a professional. He also had to wait to make his debut for York until a year had passed since his final professional appearance.

Watching Stinson play on Sunday against the Brock Badgers one thing quickly became quite clear, he was too good to be playing at this level. Despite being hampered by a terrible playing surface and some very questionable calls from the officials Stinson was able to win every ball in the air and his ability to combine with Lao was key in eventually wearing down Brock's defenders. He was also key in helping to create two of his teams goals as it was his hard work that allowed Kaye to apply a pair of easy finishes. Stinson started the day off by getting booked for a bit of a heated exchange with the officials but once he settled in to the play he showed enough to remind everyone else on the field that less than a year ago he was playing in MLS and looking to make a breakthrough with the Canadian Men's National Team. 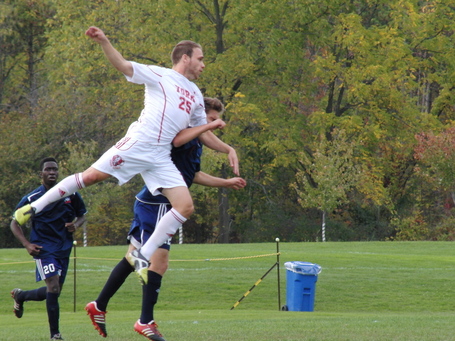 Stinson was not alone in showing his quality on Sunday afternoon in St. Catherines. Jonathan Lao was also impressive in his ability to move around the field and control the run of play. At times in the game he was the furthest York player up the field but when his squad were struggling to break down the opposition who were dropping nine defenders deep into their own half it was Lao who dropped back to start picking up the ball from his teams defenders to start attacks. That move worked out for York as it was the link between Lao and Stinson that finally proved to be too much for the Badgers to handle. With the score tied at 1-1 around the hour mark that connection was what allowed York to turn it around and wind up with what looked like a comfortable victory. 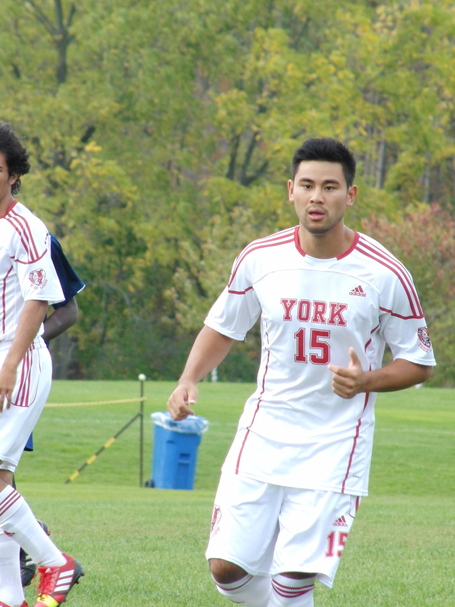 Before joining York this fall Lao was making his way up the ranks in Germany. He spent last season playing for the Under 23 squad of FC Rot-Weiß Erfurt making regular appearances for the team. It seemed at the time that he was on his way to eventually claiming a spot in the first team but things did not work out for him to make a return this fall. That left Lao at home in Toronto looking for somewhere to play which is how he wound up enrolling in York at playing for the Lions. It was another big addition for the program to have Lao along with Stinson on the roster and is a big part of why they are now the best team in the nation.

York's impressive season may have a lot to do with the new arrivals but they added to a foundation that already existed in the school's successful program. Stinson and Lao joined a roster that was highlighted by Mark-Anthony Kaye who was named OUA Rookie of the Year last season having scored 7 goals in 15 appearances. He has already surpassed his 2012 goal total having scored his 7th and 8th goals of the season on Sunday against Brock. 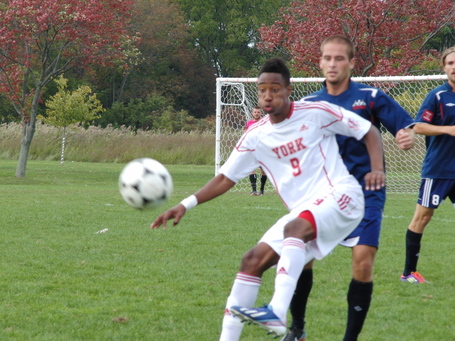 Along with playing for York, Kaye has spent time training with Toronto FC's academy and with the reserve team. He even got his name on the scoresheet earlier this year when he scored in a 2-0 win over FC Dallas in the MLS Reserve League.

Like Kaye, Dylan Sacramento has been splitting time this year between Toronto FC academy, reserves, and York. Unlike Kaye though, Sacramento has missed a number of York's games, including Sunday's, to continue to play for TFC's senior academy team or the reserve squad. On top of all that Sacramento has spent time with Canada's U-18 team as he travelled to Spain with them earlier this fall.

When York have their full roster at coach Isacco's disposal they combine an impressive attacking threat with the ability to control the middle of the park. The players with TFC connections are certainly not the only talent on the roster but they are playing a big role in the team's impressive start to the season.

The goal for York is a trip to the CIS National Championships which will be held at New Brunswick University this fall. They are well on their way to making that happen and hope to claim their third national title since 2008.