Should have been a back up, had to play a lot more than I'm sure anyone wanted, was generally unremarkable, not disastrous at the back, not threatening going forward. At 24, it's Ryan Richter.

Duncan: 26 Ryan Richter first showed up as a trialist after the season had already started (after failing to secure a place at DC United) and officially signed up on the 25th of March. He didn't get much hyperbole, merely a "Ryan is a versatile, fit and talented young player" from Ryan Nelsen. Versatile's maybe the key word there as he'd played the previous season with the Charleston Battery as a right midfielder, but TFC were clearly bringing him in as a defender.

It didn't really work did it? Though oddly enough it wasn't his defence I had a huge problem with. He seemed ok there, if nothing special, it was when he tried to go forward and do all that stuff he presumably did a lot of as a midfielder that it usually went wrong. Passes were often misplaced, to an opponent or straight out of touch and from what I remember his crosses were regularly awful.

His debut came at his former team in Philadelphia, as a sub for the injured Darel Russell, himself a replacement for the injured Richard Eckersley and from then until Eckersley's return he was a regular starter. The next game against Houston, he was switched over to the left side late when Logan Emory got injured and played his part in a series of errors that led to the late late goal, though his was hardly the most egregious mistake.

Generally there weren't many mistakes that did stand out from Richter, except for the one that really does, infuriating at the time given it's seeming importance, but reduced with the passage of time to some good comedy. The 2nd goal in that 6-0 defeat in Montreal. Justin Mapp's shot was saved by Joe Bendik but the rebound went right to Paponi. Richter had the foresight to race in from the right back spot to the line to try and block the shot, but the shot was carefully aimed behind him. He tried to reverse his momentum but instead just fell down. You can see the whole sequence here in the game in 6 highlights if you really want to, but for fun, here's a screengrab of Richter on his hands and knees as the ball gently rolls into the corner behind him. Awesome. 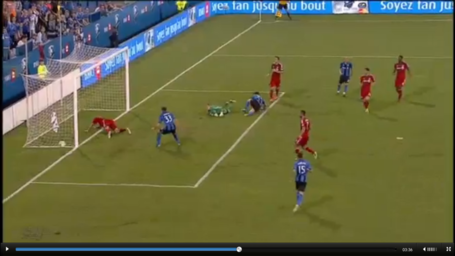 As I said there were few really memorable moments good or bad in Richter's season, but here's another time he pops up in the highlights, picking up a booking for a smart foul on Joao Plata, I only include it here for Plata's comedy fall after the fact.

He did of course have a long throw, a handy weapon if used right.  Unfortunately it was never threatening, if anyone can find a highlight to prove me wrong, please link it in the comments section, but to my remembrance, the defence cleared it every time, as if they knew exactly what was going to happen, what TFC would try and roughly how far Richter could throw it and thus where the ball would land. Because they did know, because that's all we ever did! But that's more on Nelsen and the scarcity of attacking ideas than on Richter.

Eventually Eckersley returned from injury and that was the end of Richter on the pitch, Mark Bloom supplanting him as backup/late season replacement. Off the pitch though he seemed to enjoy his time in Toronto, saying here - "The people are a lot nicer in Toronto than they are in Philly" which is fun, if a low bar. He got really involved with TFC's twelve days of charity thing, hanging out with firefighters, sick kids, puppies and kittens and more, so that's nice.

Will he be back next year? It's difficult to say really, he's cheap, can cover a few different positions, so we might as well keep him as depth, see if his game improves and he can force his way into first team contention, but it would be no great loss if he were to be let go. By the time he left it seemed like he was too good for Charleston and the USL, but it seems like he's not quite good enough for MLS, NASL would probably be juuuuust right for him.

Dave: 20. Richter was what he was for this club. Probably a fringe MLS defender at best who might be better suited to playing in NASL but when he got into games for TFC he did an okay job. Never going to be anything special but with TFC trying to find defenders in NASL so often he was possibly the best of the bunch depending on how you rate Bloom.

Armen: 15. I liked Ryan Richter. He made us forget that Eckersley was unavailable. He and Bloom make Eckersley's departure easy to transition from.

James: 30. did not like that Matt Stinson was released to make space for him, held that against him a bit - solid, athletic, never really sold on him as an upgrade (can be said of a lot of acquisitions made this season).

Kristin: 26. Hardly a replacement for Ecks and showed his inexperience often out on the pitch. Caught ball watching or just plain caught out so many times that I lost count. Groaned repeatedly watching him play and was ecstatic when his name was no longer announced as part of the first team. I'm sure he's a fine NASL player but MLS? Maybe (maybe) as cheap bench depth, but never, ever a starter.

Bruce Harding. Wow, this guy must be a good trainer because I have no idea why he ever player for us.

Elusivecart: Braun could score on him

Henry for PM: Couldn't pass or distribute the ball at all, too bad

JD: At his salary, there's not much harm in keeping him around for another year to see if there is anything there.

Michaelvee: Richter can throw the ball really far. He doesn't combine with the wingers, offers little defensively and should be gone soon enough. Not an MLS caliber player at this stage.

Prizby: I'm a suck for hard workers; I always have been; this is why I won't be surprised if I have given Richter his highest ranking (18, and no, it wasn't) from rankers. Ryan runs tiredlessly up and down that right flank and did it with no complaints and without the gas tank ever reaching empty despite some trying times when Ecks went down and we had 3 games in one week. Not the most skillful crosser of the ball (have to thank Kurt Larson for pointing this out to me), but nevertheless one of those guys who played left it all on the pitch

Schtevetown: The only conceivable way this guy stays in MLS is if the league adopts a 'Designated Long Thrower Inner' position.

The Yorkies: 2.4 on the good defender scale.

Tim: tried tested and not true

Tyler: From what I've seen, Richter is hardly good enough to be a bench warmer.

Yohan: Good kid, tries hard, NASL/USL level. Got a lot of games at right back due to Eckersley's injury, but just don't have the technical ability, especially putting in a cross, and gets caught too often out of position. His defending feels like he's a squirrel that runs around a lot chasing a nut.