I took one for the team and fell down the rabbit hole that is known as Football Manager to see what it is like to manage Toronto FC on the latest version. Having now emerged from the hole here is what I found.

I have been an avid Football Manager player for a number of years now.  It all began when I was in University and not really in the mood to do my school work.  The game is basically the best soccer related program you will find on the market if you have the time to actually get in to playing it.  The complexities that make it so enjoyable to play also make it so easy to spend an entire day just playing around with tactics, training schedules, and trying to find talents in the transfer market.

In several of the past editions of the game that I have played MLS has been a bit of an afterthought.  I tried to get into managing in the league a number of times but there was always something missing.  The rules for the league were not the most accurate and it made it hard to build realistic teams while also making it far too easy to be successful.  In the past winning a Club World Cup in 3 seasons was possible for a club like Toronto FC.  Considering FM is a game that prides itself on realism the league was not up to that standard.

Things are improved on FM14 though which is great news for MLS fans.  There are still a few issues but it now feels a fair bit more realistic.  The biggest complaint that I have found in my first 3 seasons of managing Toronto FC is that there is far too much turnover of players in the league.  Would you really expect Darlington Nagbe to play for three different MLS clubs within the first two seasons?

All of that movement also makes it fairly easy to build a strong MLS side through waivers and all of the drafts the league has.  If you can figure out ways to get good players in under the cap you can quickly build a strong team out of proven MLS players.  Signing players from outside of the league is a bit trickier though due to the limited reputations of the clubs at the start of any save.

On FM14, turning around Toronto FC is not that hard of a task.  I started my save at the beginning of the 2013 season using the roster that Toronto FC finished that campaign with.  Most of the roster at the start of my save is shown below: 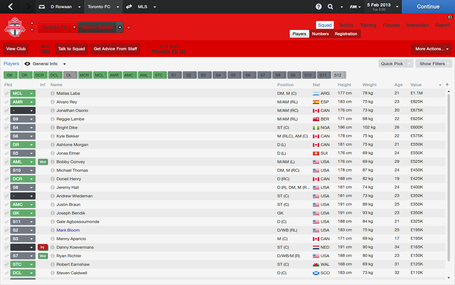 As you can see the values are fairly limited and with that roster I struggled to compete in league play.  A lot of that was due to me tinkering around with tactics and struggling on the defensive side of the ball.  Apparently, these TFC players are not capable of playing the same tactics that I use with Ajax and their far better defenders.  It got better as the season went along but giving up 79 goals is just terrible. 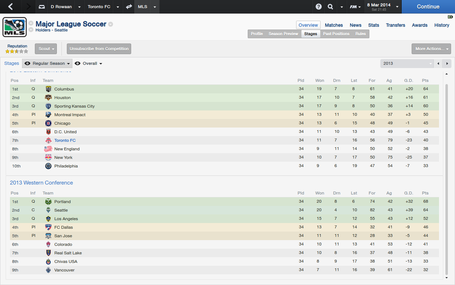 Even with allowing all of those goals I was still close to making the playoffs but in the end my save was similar to reality for 2013 as I missed the playoffs and did not win a single trophy of any kind.  With that season in the bags I was finally able to start to build the TFC team that I wanted.

In my first offseason with the club I made a few trades, worked the waiver draft, and stocked up in the Re-Entry draft to come away with Brad Evans, Osvaldo Alonso, Felipe, Bill Hamid, and Matias Sanchez.  I also managed to find a replacement for Danny Koevermans in the attack with the signing of Carlton Cole who was sitting around out of contract and joined me midway through the season. 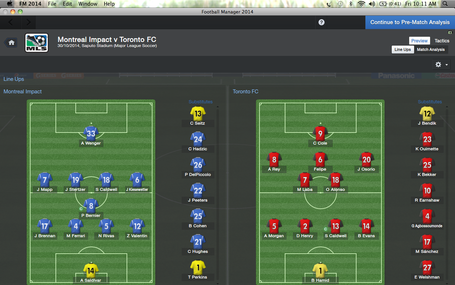 The improvements to the team along with a more settled tactic led to a big turnaround for the club as I caught the goals against down by over 20.  It was an up and down season though with several runs where injuries left my squad in bad shape and international call-ups left my options limited.  In the end 2014 turned out to be a playoff year for my version of Toronto FC! 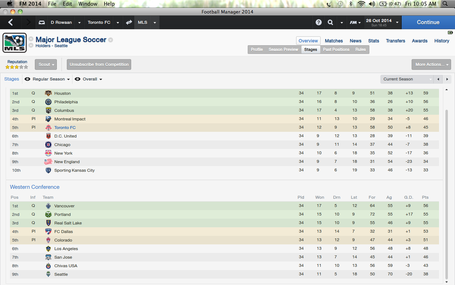 After making the playoffs that was followed by a quick exit from the playoffs in the opening round against the Montreal Impact.  It was a solid season for the team as they started to turn around picking up a playoff appearance and a Voyageurs Cup title along the way.  The star of the team in 2014 for me was actually Jonathan Osorio who finished second in MVP voting with 9 goals and 14 assists in his 29 appearances.  The only shame was that he got ripped off from winning the award because somehow Clint Dempsey with 8 goals and 5 assists in 19 games was more deserving.

Heading in to the 2015 season I did not feel that the team was in need of a lot of changes but I did pick up Chris Klute, Darren Mattocks, and Luis Gil to continue to improve my defence and add some affordable depth.  The biggest thing was that my younger players were starting to come into their own with Osorio, Hamid, Henry, and Boss all turning into top class players in MLS at young ages.

The result of all of that coming together was picking up my first major trophy with the club.  I had won the Voyageurs Cup once in my three seasons but in 2015 I was focused on the league and treated that competition as a bit of an afterthought wanting to avoid the added games of playing in the CCL.  That move paid off as I avoided major struggles with injuries for the most part and came away with the Supporters Shield. 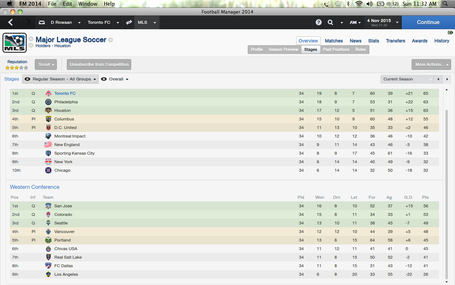 My run into the playoffs was once again short lived though as my team continue to struggled against rival clubs and wound up being knocked out by Columbus (6-5 on aggregate) leaving me with just the one trophy through my first three seasons with the club.  Considering how well the regular season went in 2015 that first round exit was certainly a bit disappointing.

2015 was also the first season that someone from my team picked up a major individual award in MLS.  I had come close in previous years with Osorio in the MVP race but it was Henry who brought the first individual honour home.  Both Henry and Boss were in the running for defender of the year making the fact that Steven Caldwell retired after the 2015 season much more bearable for the squad. 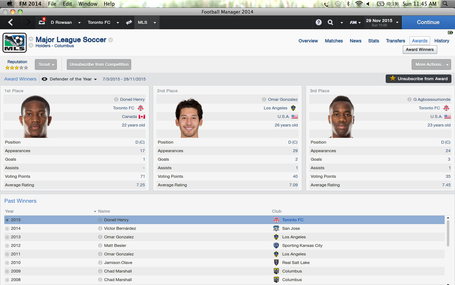 The failure to cash in on my strong side really hit home in the offseason when players started to need to be given raises and the salary cap puzzle stopped making sense.  It meant Carlton Cole and Felipe both heading for the door to make room for my young players to continue to develop and for Gabby Agbonglahor to be signed.

The changes to the team will probably make it better in the long run but it is hard to see me winning more silverware in 2016 having taken those steps back to create cap space.  If I do it will take a few more of the young players coming into their own to help fill the voids.

After three seasons of managing the team this is what FM considers to be my Best XI from the club.  It is pretty close to what I would select based contributions made to the team and it is no surprise that a lot of the players who now make the cut did so on the back of strong 2015 seasons. 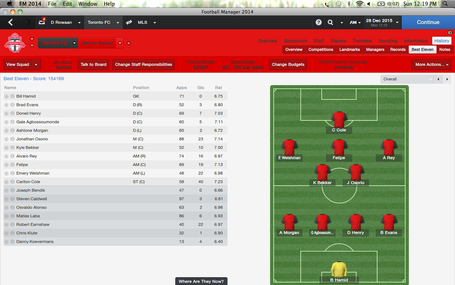 That is how my first three seasons with TFC on FM14 went.  I have to say that on the whole I am quite pleased with how managing in MLS has gone as it has presented me with a realistic challenge and it took a fair bit of work on my part to build my squad up to where it is now and the salary cap is very much in play.  The improvements they have made to MLS on the game have finally brought it to the point where it is as enjoyable to manage in the league as it is in many other leagues and that is a big step forward.

If anyone else has managed TFC on FM14 (or other versions) feel free to share how your team has done in the comment section.