Matching the professionalism and competence of their on-field counterparts, TFC today sent out an email featuring their new kit. Well done.

Share All sharing options for: Oops. Toronto FC leak their own new kit.

An e-mail was sent out today by Toronto FC, presumably to all those on their mailing list who aren't season ticket holders advertising the exclusive sale of half season packs. Couple of random notes about that before we get to the good stuff. 1) wow, season tickets are cheap, my light grey season tickets are a mere $2 more than the half season pack, though to be fair that's the only section that doesn't have an appropriately sized discount. 2)New England is considered a premium game! That's something I'm going to attribute to the return of Chad Barrett, though some will no doubt incorrectly try to say it's about it being a Friday night game during the Ex before a long weekend, blah, blah, blah.

Anyway, the best part of the email was that, screw 'jersey week' TFC are just going to leak their own kit, as there's Ashtone Morgan, as pictured above in what is clearly a new kit, with a big maple leaf behind him, because apparently the big one on the front of the shirt just wasn't patriotic enough. Sigh. Ah well, I've done that rant before many times, and aside from the embossing and the sponsor, I genuinely like it, at least from that angle and distance. This does of course match the one that was unofficially leaked out a few weeks back, and up close when you can see all the unnecessary extra detail, I'm a lot less keen.

Maybe you yourself got this email, had a quick chuckle and moved on. If so, go back and check that email and you'll see something different. Dave forwarded it to me and at first glance, yep it was the Morgan picture. When I opened up the forwarded email again to get further details about an hour later, it was now replaced with a picture of Torsten Frings, in the 2012 kit, as seen here. 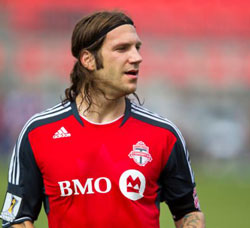 Move along people, nothing to see here.

So, unless it's a decoy that they're admirably committed to taking as far as they can to mess with us, that's some good bumbling TFC, well done.

Anyway, no point waiting until the official kit launch now is there, let us know what you think. Is the jersey a hit? You decide! With a poll!