Hope you're not doing anything important - like working or something silly - tomorrow morning at 11am. Why? That's when the latest Toronto FC Major Announcement will take place.

Whee! Another day, another TFC Major Announcement. The twitterverse exploded earlier this evening with word that another of TFC's patented major announcements was coming in the morning.

We can only assume - which is dangerous with this club of ours - that tomorrow's big announcement is that of Das Kapitan Torsten Frings announcing his retirement from both Toronto FC and competitive football. Other options include the official kit announcement and reveal - of which we have a leaked picture for you at the bottom - or the illusive new player signings...I know, I know; those are at least as unlikely as some of the tweets from your fellow fans. Some of which I've thoughtfully included for your merriment:

@kzknowles #TFCMajorAnnouncement After backlash from only Bud being served at BMO, the front office listened and are now adding Bud Light

guess who's back? back again? Mista's back. tell a friend. #TFCMajorAnnouncement #TFC #MLS

MLSE has bought the Toronto Lynx just so they can finally get some players. #TFCMajorAnnouncement

I could go on; or you could just hop onto the Twitter machine and check them out for yourself. Fair warning though, it's good for hours; OK minutes of hysterical laughter. If we can't laugh we'll cry, right? Right? Ah the joys of supporting TFC. Anyway, we'll be here tomorrow morning with bells on - what? We always wear bells to TFC Major Announcements - anxiously awaiting the big news. Please join us for the usual snarky, commenting fun! And feel free to include your preliminary guesses in the comments below! Oh and here's that snap of the leaked kit - I admit, I kind of like the long sleeves - but I'm still not buying one; probably. 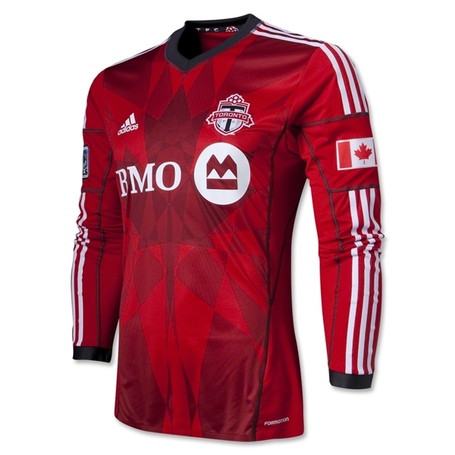