Last night TFC threw a party; not only to officially reveal the new kit, but to launch the new season. A group of SSH (chosen via lottery) attended the private event and got to bid on numerous items (the vast majority footy related) with the proceeds going to the Right To Play Foundation, purchase the new kit and meet the new players, president and coach.

Oh what a night! Last night I was lucky enough to get to attend the official Toronto FC Kickoff Event at the Berkley Church. It was a smallish group of 200 or so fans, TFC and MLSE executives, media and of course the players. It was a great space for such an event - just enough room between the lower level and the balcony above for everyone to wander and mingle at will without feeling crowded.

Hats off to TFC for the delicious food and drink - did I mention that it was an open bar? The open bar was a pleasant surprise, even if the only beer on offer was of course the new TFC special edition Budweiser bottle. I've never seen such a wall of beer bottles outside of some parties from my youth. And considering it was a group of rowdy soccer supporters in attendance (tongue firmly in cheek) there was no drunken shenanigans; hell no one even threw a single streamer!

The first hour or so was focused on the mingling, eating and drinking. It's always great to meet up with fellow supporters - saw some old friends and made some new ones - to talk about the team and what their thoughts are on the upcoming season. Most folk that I spoke with are veering on the side of cautious optimism. No one likes that the roster is see through going into Saturday's match against the Vancouver Whitecaps but most are willing to see what Payne and Co. do over the next weeks and months to rebuild the roster. 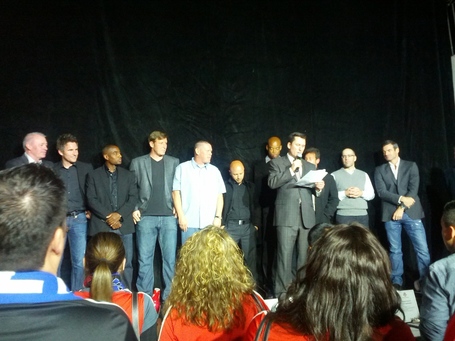 Speaking of the roster - the big moment of the night was of course the unveiling of the new kit and meeting the current team. When the team was revealed (complete with Vince McMahon style intros - seriously, felt like a WWE event) there were a couple surprise additions on stage. Introduced as members of the team were Hogan Ephraim and Taylor Morgan. Both players had been rumoured to be some of the latest additions to the squad, but nothing had been made official before last night. 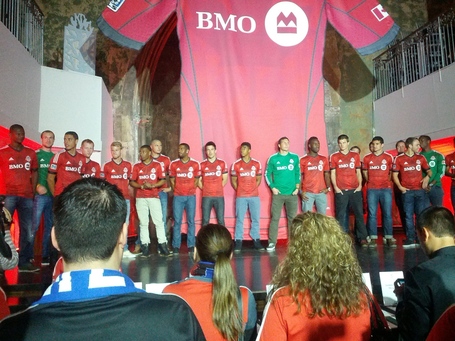 Players line the stage in the new kit

After the official introductions of not just the team but also the coaching and support staff (with kit man Malcolm Phillips getting a huge round of applause) the players were released (into the wild as it were - we supporters are a chatty bunch) to mingle with the guests. While I didn't get to talk to the vast majority of the players I had an opportunity to speak with Matt Stinson, Kyle Bekker, Ashtone Morgan, Emery Welshman, Terry Dunfield and as of yet unsigned potentials Ashton Bennett and Jonathan Beaulieu-Bourgault (both of whom were there in street clothes as only official players were sporting the new kit).

Ashton Bennett and JBB were both surprised that anyone approached them or even knew who they were - my eagle eye hard at work! - we didn't speak for long but both were happy to still be working with the team and still hopeful that they'd be able to catch on with the club. I wasn't able to confirm what's happening with either player when I spoke with Kevin Payne later on in the evening, but I thought it was good that the unsigned players were invited to the event and not excluded or considered "not worthy". 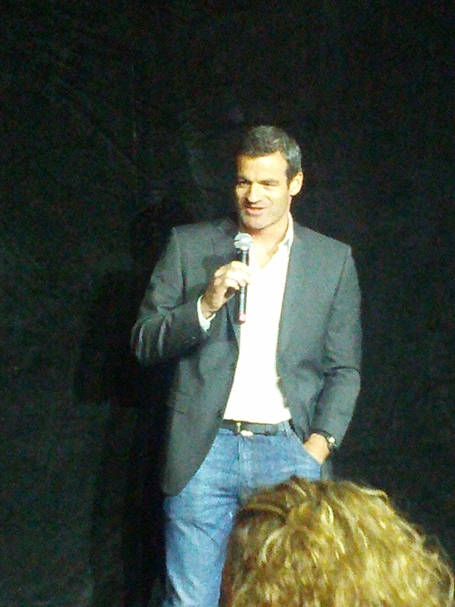 Matt Stinson is really looking forward to the start of this season; even if he is still a couple weeks away from being able to play as he's still recovering from injury. He is champing at the bit to play this year as opposed to last year when he barely got a chance to step on the pitch - something that he voiced some frustration about. But otherwise seemed very excited about the new season.

Kyle Bekker, Ashtone Morgan (who expects to play on Saturday) and Emery Welshman all talked about how great it was to be playing together again as they've all known each other for a number of years. Bekker is an easygoing guy who shrugged off his "star of the draft" tag and talked about wanting to contribute and his preferred spot on the field - right in the middle tucked in behind the forwards. Welshman demurred when I said that there was no one more excited than him to be playing here in Toronto. When I asked him about where he prefers to play he confirmed he favours the left when playing up top or on the wing (if needed). The best part about talking to the Canadian players was that they had all been following the U20 match throughout the evening and were equally bummed about Canada losing and that their teammate Doneil Henry had suffered a hamstring injury during the match.

And for those who have been concerned about the shape that Terry Dunfield and Danny Califf are in I can say that they both looked quite trim in the new kits - perhaps all that geometric patterning is slimming? Dunfield was as engaging as always, being the only player to come up and approach us for a chat. Regardless of how you feel about his play, he is a super nice guy. He joked about preferring the longs sleeved version of the kit to cover up his tattoo. He talked about how weird it was going to be playing in Vancouver on Saturday as a member of the opposing team but that he was really up for the game.

I was lucky enough to have a good chat with Kevin Payne and he confirmed at that time (as I tweeted last night) that Hogan and Taylor were both signed and that Jonathan Osorio (who was unable to attend the event) had also inked a contract. I will say that President Payne is very focused when talking about the club and the future of the team. He makes it clear that he is excited about rebuilding the club and making the team successful, not just for now but for the future. 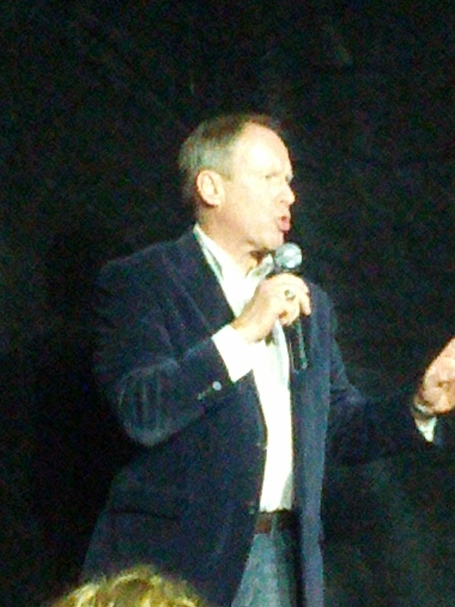 All in all it was a fun night. I would have preferred getting to speak to more players - they were all ushered out quite early - and to have a longer chat with coach Nelsen. There was a lot of talk of the "Red Thread" (this is not going away any time soon) and the obvious focus on the new Budweiser TFC bottle was a tad much in my opinion - btw the TFC Bud bottle will be coming to the north patio before each game but will not be sold inside at the concession stands. Regardless of the marketing stuff it is always great to have these opportunities to see the team and the club away from the pitch. Now to put the glitz (there was a little bit of glitz, really!) behind us and focus on 2013!