Somehow it looks like Toronto FC found a way to end up being even thinner than the last time we did this. Heading in the wrong direction is not a good thing for a squad that already had glaring holes in it.

Before pre-season got underway we took a look at Toronto FC's depth chart and came out of the process worried about a few glaring holes. That was a month ago now so certainly TFC has had time to address some of the concerns and make moves to improve the squad, right? Well, sadly it looks like the picture is actually bleaker now than it was back then as a pair of key loses in Torsten Frings and Eric Hassli have left the squad looking even more worryingly thin.

There have been some additions to the team and there will certainly be more in the coming days but for the sake of putting together this depth chart we will be limiting ourselves to players who are currently under contract with the team and have been confirmed at this point in time.

No change in this area of the team other than the fact that Stefan Frei is still on the shelf with his broken nose. He does have a fancy mask that is allowing him to train but it looks like he will not be ready for game action at the start of the season. That allows Joe Bendik to bump up to the starting role which he did okay in during preseason. He was as advertised in preseason games as he got the job done making the saves you would expect him to make but not really showing the ability to be a game changer. Safe to say he is an upgrade on having Freddy Hall in net though so that is something.

Toronto also has Quillan Roberts but the chances of seeing him with the first team in 2013 are pretty slim as the teenager is still very much a long term project and for now is just around to learn and provide some additional depth in case of an emergency.

There was not much change in this part of the team either during the preseason but we did get our first look at some of the possible partnerships as Danny Califf and Gale Agbossounmonde both got the opportunity to play beside Darren O'Dea down in Orlando. Boss probably did enough to cement himself as the third best CB on the team ahead of Logan Emory and Doneil Henry who will both likely be unavailable to start the season due to injuries.

On the outside all Toronto did was expose the fact that they are really thin. Richard Eckersley and Ashtone Morgan remain locks to start on either side but questions remain about who will provide cover for them should either miss time this season. During preseason we saw Jeremy Hall used as a right back, Matt Stinson played on the right and the left, and they used a pair of academy kids in Derrick Bassi and Daniel Fabrizi at times but neither really impressed. There is also the option of playing Henry out of position on the right and shifting Logan Emory to left back if things get desperate.

Toronto did have some possible reinforcements for those positions come through on trial but at the time of writing none of them have signed deal with the club. The addition of someone like Jamie Peters who is currently training with the club would certainly help in this area of the team but for now we have what looks like a set group of starters and then questions about depth.

The middle of the park is where the real question marks start to pop up all over the place. Frings is gone to retirement, Plata is traded to Real Salt Lake, and the only confirmed addition is Hogan Ephraim at this point and he may not even have his ITC in time to play in the opener against Vancouver.

What is left is Terry Dunfield and Julio Cesar likely to serve as the club's main options as holding midfielders. An injury cost Cesar almost his entire preseason so it is hard to say just what we can expect to see from him this season but hopefully he finds a way to play major minutes this season. Behind them on the depth chart would be Jeremy Hall and Matt Stinson who will likely be asked to provide depth at a number of positions this season.

Things are not much better when it comes to attacking options. Luis Silva and Kyle Bekker give the club two good options at attacking midfield unless they are needed to help cover holes elsewhere like was the case as Bekker spent time on the wings during the preseason and Silva spent time at forward.

The club is reportedly going to be signing Jonathan Osorio to a deal so that would add another option at attacking midfielder but despite his impressive performances in the preseason he is probably not more than a depth option at this point in his career.

The wings are probably the worst area for TFC but the addition of Ephraim on loan will help to improve that at least somewhat. It looks like Emery Welshman is going to be used as a winger instead of a forward for TFC so he joins Ephraim, Reggie Lambe, and Andrew Wiedeman as the options for playing out wide. It is a group that is lacking in consistent quality and overall depth at this point in time but the good news is that TFC are looking at bringing in players that could help to improve that bleak picture.

With Eric Hassli now enjoying life in Dallas and Danny Koevermans still a few months away from being fully fit the forward group is an area of concern for TFC fans. The remaining options are headlined by Justin Braun and not a whole lot less. Welsham can play up front and so can Silva but they are both going to be needed in other parts of the field as well. There were other forwards in camp with TFC but none have officially signed for the club at this point in time though Taylor Morgan seems to be a done deal that is just waiting on confirmation.

Add to the lack of options the fact that Braun is currently on the shelf with a concussion that makes him a big question mark for the start of the season and it is hard to see how Ryan Nelsen is going to make his forward options work out. Robert Earnshaw is on trial with the club now and might just have to sign so there is someone available to play the position.

On the hole it looks like TFC could now put together a decent starting XI if everyone is actually fit and available for selection but with the team coming into the season with a number of injuries already it is exposing the real lack of depth from the word go. At this point it looks like the team may have a hard time finding 18 senior players to dress for the game in Vancouver.

Until some reinforcement arrive there is good reason to worry about the lack of quality and depth in the team. Hopefully some of the players perform better than expected and new players are added in the coming weeks or it could be a long year. 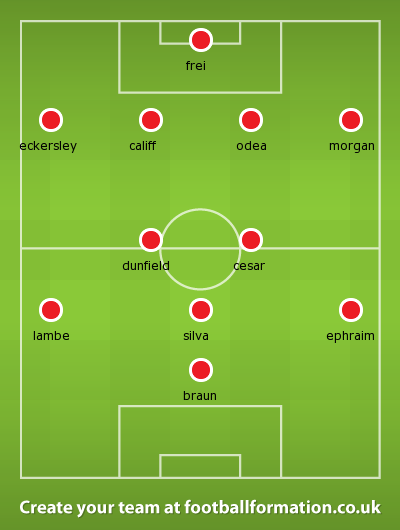