What just happened? Toronto at Montreal - The Impact's second goal, and Dunfieldinho

Taking a closer look at the lead up to 2 of the goals from Saturday's game.

Share All sharing options for: What just happened? Toronto at Montreal - The Impact's second goal, and Dunfieldinho

The first-half penalty kick - awarded not by Baldomero Toledo, but by his assistant on the far touchline - changed the match, robbing spectators of what should have been a fascinating tactical battle between Toronto's high-pressing and Montreal's patient passing.

At the time, it could be argued that Toronto was even in the ascendancy, keeping Montreal pinned back deep in their end, especially after the forced removal of Alessandro Nesta.

In a way, it was that success that brought about the penalty kick, Toronto's defenders gradually pushing up-field, leaving more and more space for Montreal to expose at the back.

Though the harsh linesman's decision began the downfall, it was the second goal, mere moments before half-time that doomed the occasion.

The fourth official had just held up the signboard indicating two minutes of stoppage time to be played and both sides seemed content to see out the half.

Montreal's keeper, Troy Perkins, has just taken forever to put the ball back in play - much to the chagrin of Terry Dunfield and fan's of the Canadian Women's National Team - and Matteo Ferrari had dawdled on the ball for an eternity before finally passing to Felipe, who quickly sent it back to Hassoun Camara to return to Ferrari.

This had the effect of drawing Toronto's forward players - and even Dunfield - well into the Montreal half. Ferrari again found Felipe dead centre, who - much more quickly this time - sent an outlet ball wide to Jeb Brovsky on the right-touchline. Brovsky stole up to the half-way line before being confronted by Reggie Lambe and then dishing in-field to Bernier.

At this point Toronto seems in a decent position - Jeremy Hall has Andrea Pisanu marked, Bostock is tucking in-field from the left - except for Dunfield, whose foray forward has left Davy Arnaud in plenty of space, now slowly dashing - prancing - through the centre-circle. 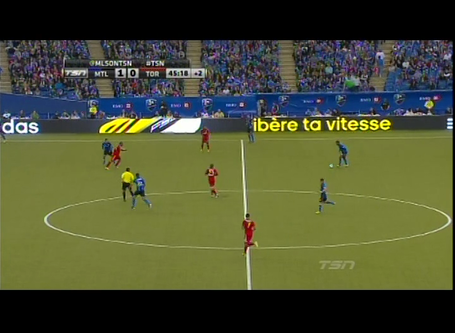 Dunfield motions to block the passing lane from Bernier to Arnaud as Hall leaves Pisanu to pressure the ball. At the vital moment, Arnaud slips behind the referee to re-open the passing lane between Dunfield and Hall. Perhaps Terry, sixth-sense aware of a man behind him - but unaware that man was Toledo - loses his mark for an instant and Bernier pulls that string. 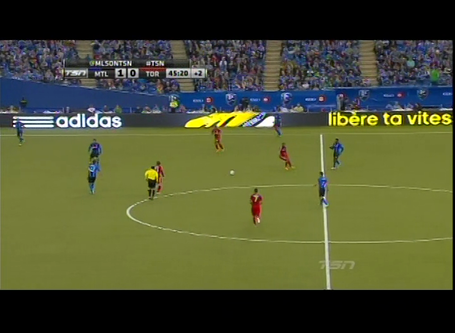 Taking a step back, for a brief moment, Montreal evidenced a certain cunning in this build-up. Drawing Toronto forward with their delays, preying on TFC's instinct to press, while subtly overloading the right flank - both Andres Romero and Pisanu, nominally on opposite flanks - have drifted over to the right, creating a numerical anomaly that abused any potential defensive cover for Dunfield's lapse.

Back to the action, Dunfield spots the incoming ball, turns in chase, but Arnaud is already two strides ahead, having let the ball run across him onto the leading pass.

Di Vaio had drifted into his favoured wide-left position, occupying Richard Eckersley, but has now maneuvered himself to be both goal-side and ball-side of the right-back as Arnaud picks up possession facing goal. 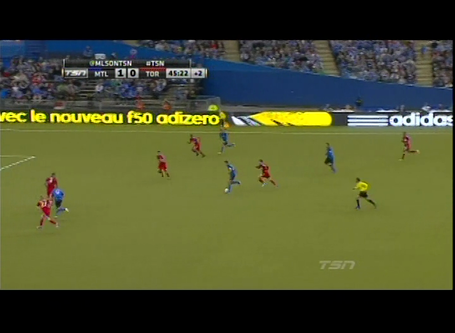 Danny Califf is caught looking at the ball, but is acutely aware - perhaps via a shout from Eckersley - recognizing both Di Vaio's run and his own inability to turn in time to win any footrace between the two, and so decides to attempt to catch him offside.

The linesman - assistant referee; the same one who awarded the penalty kick - is trailing the play ever so slightly - by a step, perhaps similarly caught out by the quick spring to life from Montreal, and is not perfectly in line with Califf, the last defender - though initial camera angles make being overly definitive impossible, further review from a much-straighter angle prove both the offside and the out of position linesman to be true.

At the exact moment Arnaud pokes the through-ball with the outside of his right-boot between Califf and Darren O'Dea - who was drawn out to the left with Ashtone Morgan having been targeted all night and currently stretched by Romero on the touchline - it could be said that Di Vaio's leading leg - his left - and perhaps his head; both scoring assets - were beyond the back-shoulder of Califf. 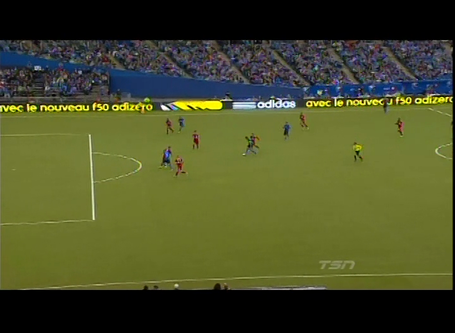 Even then, O'Dea just misses cutting out the pass by less than half a step.

Di Vaio takes one touch to round the onrushing Joe Bendik deftly and, even more so, turns slightly, squaring himself to the goal, while steadying to place a right-footed shot high into the far-top-corner past Eckersley who had, in the meantime, rushed back to defend the near-side of the goal from the line.

From Bernier to the back of the net took eight seconds.

At many points along the way this goal could have been prevented.

Hypothetically: Had Califf jumped up with more abandon? Had Dunfield not lost track of Arnaud? Had the attacking core given up their pressing and seen out those two minutes? Had the linesman been in line and the flag gone up? Had O'Dea not been so left-of-centre or dove in to cut out the pass?

One can feel hard-done-by for the non-call, but this was an opportunity borne of Montreal's patience, the creation of space, and a breakdown of Toronto's rigid defensive structure, an offside flag would have simply spared Toronto's missteps.

A two-goal deficit, as it proved, was too steep a hole to climb for a Toronto side still finding its attack. Especially given how demoralizing it can be to concede in the last-minute heading into half-time.

Terry Dunfield, a real Marmite man - one either loves him or doesn't - every so often springs to life and shows a genuine moment of class. His last-minute header against Vancouver immediately springs to mind as an example of him rising to the occasion.

Dunfield showed such a glimpse of this alter-persona during a brief passage in Montreal.

Colleting a ball from Jeremy Hall on the right-side of the centre-circle, Terry executes a sharp turn, losing Marco di Vaio -anticipating a back pass - in the process and begins to run - at a canter; clippity-clop - towards the Montreal goal, drifting ever-so-slightly further to the right.

Felipe, tracks his run casually, seemingly unaware of the threat Dunfield possesses when pointed at goal - earlier in the half the Toronto midfielder had snatched at a chance from thirty yards when presented with space, at a time when a threaded ball to Robert Earnshaw seemed the more viable scoring option.

Dunfield gives the eyes to Dennis Iapichino, as if he were to use the wide-right run of John Bostock, before making use of the space allowed behind him by the lack of Montreal concern with an over-exaggerated ball-heel drop pass to Hogan Ephraim, who is flowing from wide on the right, into that open space.

Felipe turns to confront Ephraim as Iapichino tries to recover from drifting wide to track the run of Dunfield - now hooking in from the corner of the box to collect a return ball - but the Toronto man has gotten goal-side and Iapichino can only succeed in getting them into a tangle, forcing Dunfield to the ground as the return pass is slide to him.

Toledo calls another penalty, this one of his own volition, to the incredulity of Montreal, and all because of a brilliant bit of work and no small amount of skill from Dunfieldinho.

Robert Earnshaw converts and Toronto is back in the match, though it proved futile in the end.

What it lacked in the smoothness of the samba style it made up for with efficiency.

The 401 Derby, Round 1 - Toronto FC vs. Montreal Impact: The Storystream