Waking the Red takes a deeper look at the events that led to Philadelphia's late, game-tying goal

Share All sharing options for: What Just Happened? Toronto at Philadelphia – The Union’s Late Game-Tying Goal

Toronto FC is a club with a penchant for late goals.

Last season, they allowed sixteen in the final quarter of an hour in matches – few will recall that they also scored eight in that same time frame.

So far, they have allowed two such crucial late goals; both would level the score, robbing the Reds of four points, turning wins in draws.

For the sake of fairness, it must be stated that they have scored three times during that period this season – Jonathan Osorio’s late go-ahead goal against Los Angeles and the dramatic pair that saw them claw back against Dallas.

The madness in Philadelphia reached a crescendo with the red card to Ashtone Morgan for a second yellow.

It was a fractious match and the inexperienced referee had lost his patience – and the respect of the players and coaches, judging by body language and post-match comments – forcing him to reassert himself with that basest of tools, the booking.

It was an aerial challenge like many others in the game, Morgan and Sheanon Williams went up for the ball, with the Philadelphia right-back falling to earth and clutching his head dramatically.

Was it a foul? Sure, why not; everything else had been. Was it a booking? Probably not, but Ashtone Morgan had been in the trenches all day - having taken a thump from Danny Cruz in the first half - and the nasty left-back does not suffer fools gladly.

It is worth mentioning that Union coach John Hackworth, with an extra bit of MLS knowledge under his belt, removed Danny Cruz from the fray – who was similarly on a booking and looking for a second – after sixty-five minutes, while Morgan was left to soldier on.

Keon Daniel – who had been providing excellent service all afternoon – sent the ensuing free-kick towards the back-post where it was ultimately turned in, only to be controversially ruled out.

Amobi Okugo, who had no chance of actually reaching the ball, launched himself forward to disrupt the Toronto keeper and seemed to touch the arm of Joe Bendik as he went up for a ball that subsequently slipped between his hands and bobbled further towards the back-stick.

Jack McInerney then crunched into the keeper after he had both hands on the ball, though whether he had control is difficult to determine, knocking it free and over the line.

The decision, as so many before it, was debatable. Philly could rightfully feel aggrieved, but would have felt the same were it a goal given against them. The imperfections of football defined.

With their left-back dismissed, TFC adapted. Ryan Richter, making his debut, swapped flanks to the left and Reggie Lambe dropped back into vacated space on the right. 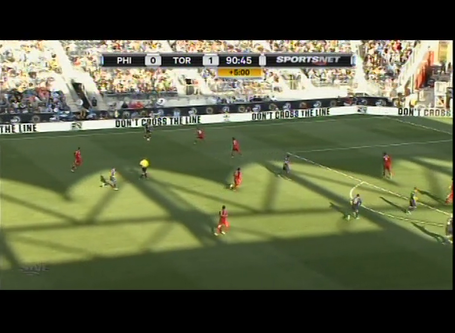 From the free-kick Toronto launched it long and tried to waste time with the ball in the Philadelphia corner, but could only steal a few seconds before the pressure was back on.

To defend the ensuing left-sided corner kick, Lambe and Richter swapped back – presumably due to pre-assigned defensive roles - with Lambe on the back post and Richter marking Conor Casey on the opposite side of the goal. 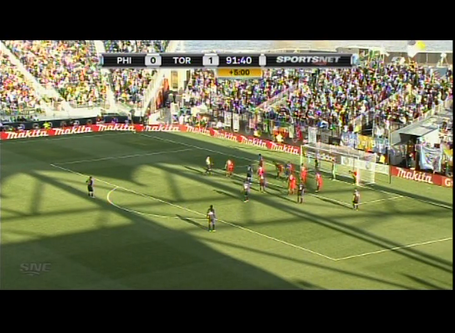 Prior to it being taken, Lambe was barged to the ground unnecessarily by Michael Farfan – who, given the referee’s mood on the day, should likely have seen a card - for daring to pick up the ball. He slowly got up, perhaps incredulous at the inconsistencies, and hobbled across the field to the post.

The corner was over-hit and fell for Daniel to collect on the right and send it back in, just over the head of Richter for Casey, who forced a goal-saving block out of Gale Agbossoumonde, before Richter then launched it out of danger into touch, albeit shallowly, within range of a long-throw.

Williams, possessor of such a long-throw, quickly collected the ball and launched it back into the box from that same left-handed attacking side.

Lambe, however, did not treat the throw like a set-piece - as Rory Delap’s celebrity has evidenced one should - and remained at the top of the box, hopeful to pressure any half-cleared ball away from goal, leaving the back-post unattended. 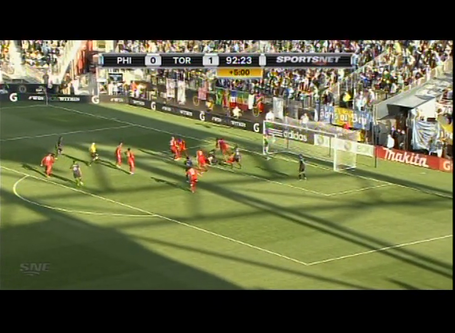 In came the throw to the near-post area.

Darren O’Dea popped his defensive header into the air. Jeremy Hall leapt over a pile of bodies to poke the ball further from goal.

The referee inexplicably rushed into the box - perhaps in thought of calling a foul on Jeff Parke, who had knocked O’Dea to the ground as he went up for the ball, limiting the effectiveness of his clearing header – but let play carry on.

Brian Carroll turned the falling ball back inside on the volley, Casey, the first to emerge from the pile of players, helped it on with a deft swivel to send it low to the back-post where McInerney was unmarked for an easy, tying tap-in.

Many wondered how McInerney found himself so wide open; the sad truth is that he was never marked on that throw in, nor was he covered on the earlier corner kick, whiffing on the initial service before Daniel ran out to collect it wide.

When down a man there will always be a free opponent, that it was Philadelphia’s top-scorer is unfortunate.

Morgan was dismissed at 87:45, a goal called off at 88:54, the corner hit at 91:55, the throw-in launched at 92:20 and the ball crossed the line at 92:27 - less than five costly minutes leading to thirty-two seconds of intense pressure that confused a discombobulated and fractured back-line.

Reggie Lambe is not a full-back – though his defensive diligence this season has been admirable. Ryan Richter, making his first appearance unexpectedly, having replaced Darel Russell just minutes into the match, had done incredibly well, given little playing time with the side. And Toronto, in the end, were lucky to escape with a point after a stunning through-ball from debutant Kleberson sent Hoppenot in alone in the final seconds of the match, calling on Bendik once more to save the day.

The inability to put a foot on the ball and maintain possession, the desperate launching of clearances – never as effective a strategy as it sounds – and the imperfect defensive assignments, leading to confusion and open opponents, in the end doomed the hope of a first win on the road.

If Lambe had been on that back-post, would McInerney have scored? Probably, he’s been in good form and the goal had been long in the making.

Maintaining defensive composure in the face of adversity is the hallmark of a strong side. Toronto, though sturdier than usual, is still not yet a completed project.

This mix-up, be it a slight miscommunication, lack of preparation, or moment of madness, will hurt, but should prove a valuable learning experience for all involved.

Most in Toronto would have been happy with a point prior to kickoff; this match should be remembered for Bendik standing on his head, not the goal that sullied the day.

And perhaps, for the birth of a new rivalry; the two cities have a long sporting tradition and much in common. Their next meeting on June 1st in Toronto should be a good one.