With the Canada's four professional clubs gearing up to compete for the Voyageurs Cup once again it is worth looking back on how the trophy came to be and just why it is important in the Canadian soccer landscape.

Share All sharing options for: Voyageurs Cup: A brief history

Canada's domestic cup championship may still be in its infancy but the fact that it has even been around as long as it has been is due to the efforts of a group of Canadian soccer fans. That group, the Voyaguers, worked with the CSA to try and create a national cup but when things were moving along much too slowly, they took the initiative to raise the money needed to commission a trophy and out of a fundraising drive on an online forum was born the trophy that is still presented to the winners of the Canadian Championship. 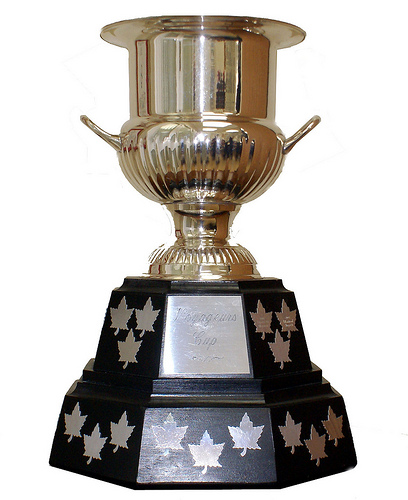 The trophy was first contested back in 2002 when the Voyageurs announced that the cup would be awarded to the most successful Canadian team in the A-League (later the USL first division or USL Pro). That meant that in the first year four teams were eligible to win the prize with the Montreal Impact, Toronto Lynx, Calgary Storm, and Vancouver Whitecaps all taking part in the A-League. The winner of the trophy would be determined by who collected the best record against the other Canadian teams over the season.

In 2002 it was the Montreal Impact who won the trophy with 15 points from their 6 qualifying matches while the Toronto Lynx wound up in second place with 13 points. That finishing order would remain the standard result for the Voyageurs Cup over the following years as Montreal dominated the early years of the competition winning the cup each year up until 2008.

Over that stretch of Impact dominance the Toronto Lynx finished in second place in four of the five seasons that they were included in the competition. The best finish by the Whitecaps was also second place as they were the runners up in both 2005 and 2006.

The trophy continued to be awarded to the top USL side in Canada up until 2007 when it was contested between only Montreal and Vancouver. Starting in 2008 it took on a new format with the arrival of Toronto FC in MLS. Starting that summer, the second of TFC's existence, the Voyageurs Cup winner was determined by a round robin tournament between Canada's top clubs. For the next three years Montreal, Toronto, and Vancouver would battle for the Cup.

2008 was the final year of Montreal's dominance as they won the trophy with 7 points in 4 matches edging out Toronto who managed just 5 points. Toronto's surprise 1-0 defeat to Vancouver that year combined with a pair of draws cost them a chance to bring home the trophy. The final match was at BMO Field with TFC needing to beat Montreal, but failing to do so, allowing the Impact to receive the trophy in front of the less than amused TFC faithful. with John Carver memorably going off on Jeff Cunningham in a post game interview.

The dominance began to shift in 2009 though as Toronto claimed their first of what is now four straight titles. That year may have been the most dramatic edition of the Cup as it came down to goal difference between Toronto and Vancouver after both clubs finished with 9 points having split their head-to-head meeting. It all came down to which team finished with a better goal difference and heading into the final match it looked like Vancouver had it all wrapped up with a +4 advantage over Toronto. Then the miracle in Montreal happened (Vancouver like to talk about surrender or something like that) as Toronto went into Saputo Stadium and notched a 6-1 win. Up until Chad Barrett got Toronto's fifth goal in 82nd minute the trophy would have been headed to Vancouver but thanks to that Barrett goal, and Dwayne De Rosario hat-trick, and a brace from Amado Guevara the Whitecaps saw the trophy slip away, much to the chagrin of the watching Teitur Thordarson and many of the players who were in attendance.

Toronto won again in 2010 but with a lot less drama as they ended up 4 points clear of Vancouver in the final standings who were in their final season of play before joining MLS.

The trophy was clinched before the final game was even played in Toronto, quite possibly the most dramatic moment of that year's tournament being Roberto Brown's punching Nick Garcia.

From 2011 onwards the tournament saw another shift in its format. With Vancouver joining Toronto in MLS for 2011 and Montreal set to follow in 2012 the competition was getting tougher and with the addition of FC Edmonton to NASL, fitting in a four team round robin would have been next to impossible.

So for 2011 the group stage format was gone and it was replaced by more of a cup format with the teams contesting semifinals and a final with both taking place over two legs. The semifinal matchups would be decided by league positioning from the previous season with last place in MLS considered as being ahead of first place in NASL.

That format meant that in 2011 Toronto would take on FC Edmonton for the first time ever in the semifinals. Toronto won the first leg at Commonwealth Stadium 3-0 before coasting to a 1-0 win in the return leg. On the other side of the bracket Vancouver disposed of Montreal with a 2-1 aggregate win.

The final saw the rivalry between Vancouver and Toronto get ratcheted up another notch as Vancouver could only managed a 1-1 draw in their home leg as a Maicon Santos goal cancelled out Eric Hassli's effort, in a game which probably should have finished at least 3 or 4-1 to the 'Caps. That left the tie very much in the balance for the return leg but after Hassli scored early in the game to give Vancouver the lead, the weather decided to turn against them and the match had to be abandoned just after the hour mark due to a thunderstorm that would not letup. Teitur Thordarson was once again filled with rage, and that would be his final chance at Voyageur Cup glory as he was fired before the rescheduled game took place.

The match being abandoned wiped Hassli's goal off the board and gave TFC a fresh start. It also moved the game from May 25th until July 2nd which gave TFC time to get on better form. The Caps took the lead early again, this time thanks to a goal from Camillo but TFC fought back with Joao Plata converting a penalty early in the second half before Mikael Yourassowsky got the winner handing TFC a 3-2 aggregate win.

In 2012 Toronto went up against Montreal in the semifinals after much debate over how the seeding should work considering Montreal's move to MLS meant they had a whole new roster and were much stronger than the team that finished poorly in NASL the previous season. A dull 0-0 draw in the first leg set up a dramatic clash at BMO Field which Toronto won 2-0 despite Richard Eckersley seeing red in the 17th minute of play. With Vancouver cruising to a 5-1 aggregate win over Edmonton, the rematch in the finals was on.

With Toronto unable to do anything right in league play the Whitecaps should have been the favourites to finally win the trophy but once again luck was not on their side. It took a stunning goal from Eric Hassli in second half stoppage time just for the Caps to salvage a 1-1 draw in the first leg to set the stage for a fiery return leg. That meeting saw Julian de Guzman sent off for gently touching the face of Jun Marques Davidson and Sebastian Le Toux pick up his second yellow moments latter in the scuffle that followed. With both teams down to 10 men for the final half hour Toronto took advantage late with a goal from Reggie Lambe in the 83rd minute proving to be the winner.

The Voyageurs Cup has now been handed out a total of 11 times with the Montreal Impact winning the first seven editions, followed by four straight Toronto FC wins, and with Vancouver's name still not sullying the trophy. It has been contested by both the USL and MSL version of the Vancouver Whitecaps and Montreal Impact, Toronto FC, Toronto Lynx, Calgary Storm (also competed under the Calgary Mustangs name), Edmonton Aviators, and FC Edmonton over its short history.

The trophy was originally bought and paid for by a group of Canadian supporters but is now under the care of the Canadian Soccer Association who have agreed to loan it from the Voyageurs to present to the winner of the awfully branded Amway Canadian Championships. The winner of the Cup now gets the title of Canadian Champions and with that a spot in the CONCACAF Champions League but it still continues to have strong ties to Canada's leading soccer supporters group, with members of the Voyageurs doing the presenting honours each year.

Over its history the Voyageurs Cup has become a key element of the rivalries that have been formed between Canada's top three professional clubs. Montreal may have their early years of dominance to take comfort in but since winning the title in 2008 they have failed to win a single match. Vancouver has never won the trophy but their fans will point to a number of instances where they were "screwed" and assure you that this will be their year.

It is a short history but one that is full of drama which should make any Canadian fan excited about the 2013 edition of the competition. It may not be the priority for Toronto FC this season as they continue to rebuild and don't really need the extra games of competing in the CCL, but as someone who respects the history of the Voyageurs Cup it would be hard to stomach the team giving anything but their best effort to claim Canada's top soccer prize.