Toronto got a big 2-0 win in the first leg but heading into Wednesday night's return leg in Montreal they know that the job is not done yet. The question now is will the Impact brass listen to their fans and field the A-team to go after the big win they now need.

The job is halfway done for Toronto FC but as fans have seen in recent weeks this club is not one that you can really count on finishing the job until it is actually done. The reds head into the second leg of their Voyageurs Cup semifinal against the Montreal Impact with a comfortable 2-0 lead but will likely be in need of at least one away goal to put this tie out of reach.

Toronto got the win in the first leg with what was clearly a weakened starting lineup as Ryan Nelsen made the choice to rest a number of his key players during a busy part of the schedule. The move paid dividends due to the fact that Marco Schällibaum also left a number of key starters out of his lineup and even left the likes of Alessandro Nesta and Marco Di Vaio back in Montreal.

The Impact paid the price for their weakened lineup in the first leg as they seemed to be lacking any real threat up front. That was to be expected though as a Montreal has struggled to find consistent scoring in MLS despite sitting on top of the Eastern Conference. Other than Di Vaio and his four goals in league play there is no one else on the roster that has found the back of the net on more than one occasion. Through their first seven league games and one cup match the Impact have just 9 goals to their name and that comes off a total of 77 shots so not exactly an efficient shooting display. No matter how you spin it it is becoming clear that a lot of their success if going to come down to the play of Di Vaio in scoring goals and Patrice Bernier in pulling the strings from the midfield.

To be fair Toronto FC's attacking prowess has not been much better this season as they have relied on the scoring of Robert Earnshaw for the majority of their 10 goals through 8 league games. They have also gotten their 10 goals off of 77 shots making them slightly more efficient than the Impact. The good news for Toronto was that in the second leg they found some other goal scorers and with Jonathan Osorio and Luis Silva looking like scoring options from the midfield the scoring depth may finally be improving.

The big question for the second leg is going to be surrounding the lineups. If the Impact decide to play the kind of lineup that has helped push them to the top of the Eastern Conference early in this season then they will certainly be in with a chance of overturning the result for the first leg.

That is just what their fans want to see take place. In fact, during Montreal's home game this weekend against the Chicago Fire one of the club's major supporters groups, UM02, displayed their displeasure with a series of banners. Their feelings were that the club should be taking the Voyageurs Cup more seriously and resting players against the Fire instead as they are the bottom team in the east. There was also the added wrinkle of the fact that it was Montreal's first time on NBC and the fans felt the club was prioritizing looking good for that over the domestic cup. You can find more about their protest and motivations on the Voyageurs Forum. 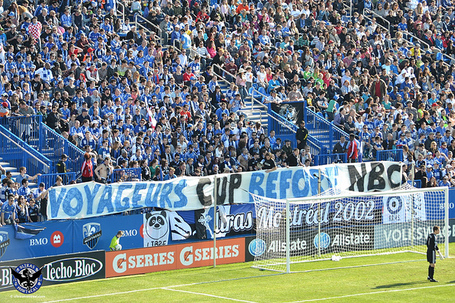 If the fans get their way TFC might be in for a long second leg of having to deal with the Impact pressing. If Nelsen fields the same lineup from last week's win at Stade Saputo and they have to go up against Montreal's A-team it could be a recipe for disaster. It could prove to be key for Nelsen to find some balance in his lineup that allows him to retain the players who performed well last week but drop some of the weaker performers to bring in a couple more first choice players.

The other question for TFC will be whether or not Matías Laba will be ready to make his debut for the club. He was not available for selection on the weekend against the New York Red Bulls but he will be available come Wednesday night and could see action if the coaching staff feels he is ready to be thrown into the game. With Terry Dunfield still on the shelf with his injury chances are fans will be seeing Laba in one of the two matches coming up this week so there is just one more thing to be excited about.

As noted before the first leg the Impact are on quite a winless run in this competition and on Wednesday night they are going to need to do more than just win this game. They need to win by at least two which is something that they achieved for the first time this season with the 2-0 win over Chicago on the weekend. Their last two goal win in the Voyageurs Cup was actually their last win in the competition and that was a 2-0 win over Vancouver back on June 25, 2008.

So once again history is on the side of Toronto FC and they really are clear favorites thanks to that 2-0 win but the job is clearly not done yet. With Montreal likely to field a stronger lineup and push for 90 minutes the tie is certainly not over. It would be dangerous for TFC to try and sit on their 2 goal lead because if the Impact do score the first goal on Wednesday night then it would suddenly become an entirely new game. The key for Toronto may be to score that one away goal to put the game beyond reach as if Toronto does get on the board on Wednesday night it suddenly forces the Impact to score 4 goals instead of 2 and that would probably be enough to get the job done.

The game should also give Stefan Frei a bit more action to deal with in goal which will be good to see after he spent over a year on the sidelines and got very little testing in his first game back last week. With Montreal likely to press he might have a chance to remind fans and the coaching staff just what he can bring and show if he is back at the level that has made him one of the club's most valuable players for several seasons.

Wednesday night will add just one more chapter to the growing history between Toronto and Montreal and hopefully it will be another good one for TFC as they have owned Montreal in cup play since 2008.