Toronto FC vs. Columbus Crew - The Battle For The Trillium Cup; Try Not To Get Too Excited

Has it really only been 10 days since TFC last played? As usual it's been a tumultuous time in TFC Land and fans can be forgiven for thinking we've gone back to the beginning of the season. New players being brought in at the last minute, others being left on the bench or at home altogether, coupled with Kevin Payne's public calling out of the team for poor performances, well it's been a lot of fun. Or something.

Share All sharing options for: Toronto FC vs. Columbus Crew - The Battle For The Trillium Cup; Try Not To Get Too Excited

Everyone refreshed from 10 days off? Have you put the epic late game meltdowns behind you? Yeah, me either. The ongoing war between what's good for the team down the road vs. what's good for the team now is a difficult one. I struggle daily to stay calm and look to the end of the season (and to next season) instead of the end of the week. All of that would of course be much easier if our Reds didn't insist on suffering an epic defensive meltdown every game.

In response to those (no longer funny) repeated gaffes Payne and Ryan Nelsen have made some roster changes slated to help shore up the team's defensive woes and add some help for Robert Earnshaw up top. Newcomers Steven Caldwell (a surprising pickup as he plays CB; bye bye Califf?) and former Nelsen teammate, forward Jeremy Brockie were both brought in on loan in advance of tomorrow's game against the Columbus Crew. Also joining the team in a somewhat surprise trade yesterday, is former SKC midfielder Bobby Convey - huzzah a wide player! Out of the three only Caldwell and Brockie are likely to feature tomorrow as Convey arrived in town as the team's practice was ending. Although anything is possible and it's not as though Convey needs to get match fit - my guess is he'll be on the bench but won't play. 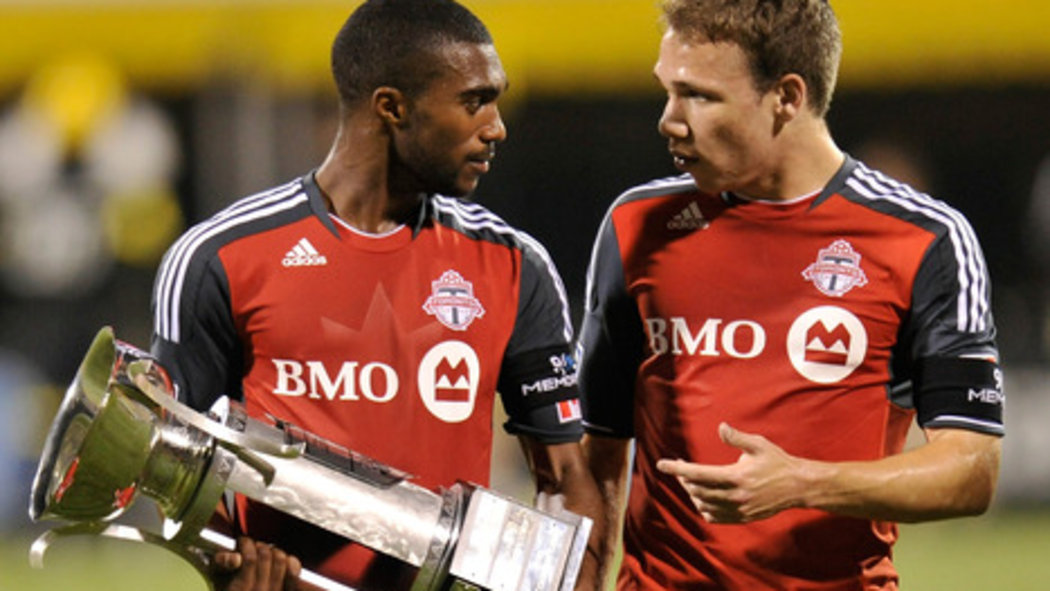 But wait you say! Doesn't that put the team over in roster numbers? Well spotted reader; it does indeed. In a move that surprised pretty much no one, supplemental draft picks Taylor Morgan and Ashton Bennett were both given their walking papers. This move also freed up an additional international slot so they're in the clear until Danny Koevermans makes his way back from injury. Also leaving soon according to Nelsen (as per Kurt Larson on twitter) will be Hogan Ephraim, who has done little to impress in his time here.

Nelsen confirmed today that Ephraim will return to QPR this summer. When will be determined by his club. #TFC

What does any of this have to do with the epic battle for the Trillium Cup you ask? It serves to underscore that while Toronto have been underperforming, that regardless of interview hyperbole from Payne and Nelsen there is some attempt to bring in (allegedly) better players. Again there are loan deals involved - and Brockie will be gone by the end of the summer - but it can't hurt, can it?

Well one of the questions that always comes up for TFC is communication and familiarity - this constant roster shifting does make that difficult - especially if they're not going to be part of that core going forward. But these are pros; they can't act like scared kids who've never kicked a ball - man up and fake some chemistry already; at least until that core comes together and the true chemistry is forged.

Tomorrow's game comes against our manufactured greatest rival the Columbus Crew. Feel the rivalry!! Seriously, other than some away trip hard feelings and those blinding neon yellow kits what is there to dislike about the Crew? Well there's Crew Cat - although Bitchy could take him in a fight and umm, well - regardless of the history this is the one bit of silverware that we have left to play for and for the Reds the chance to (again) prove themselves to their fanbase that they are able to close out a game and put in a complete 90 minute effort.

It won't be easy as TFC are currently plagued with injuries, particularly on the backline. Out or unlikely to play are Richard Eckersley, Darel Russell, Gale Agbossoumonde and Logan Emory. And as the defense has borne the brunt of those late game, goal conceding errors Nelsen will have to make some unusual decisions as to who makes up the back. Given those injuries expect Darren O'Dea, Ryan Richter and Steven Caldwell in the starting XI, with the fourth a bit of a mystery.

As for the rest - I expect the usual suspects will take to the pitch. Matias Laba and Jeremy Hall will pair up at the back with Luis Silva, Reggie Lambe and/or John Bostock (one last chance?) joining Robert Earnshaw and Justin Braun on the attack. The keys are going to be if the somewhat makeshift defense can play a much smarter game and if the growing partnership of Hall and Laba can produce better play through the middle of the park. Balls on the ground will be important as it's evident that Earnshaw plays best with the ball at his feet and regardless of the work Braun has put in of late the job of scoring goals falls to Earnshaw.

And any preview of a match between these two teams would not be complete without noting that the Crew are akin to TFC kryptonite, having only beat them once in six seasons and never at home. Seriously - one win and NONE at home...Fun times right?

Well all is not lost - the Crew are not exactly on a stellar run of form. Losers of their last two games and having only won 1 of their last 6, they come limping into BMO - both figuratively and literally. The Crew will be without defensive stalwart Chad Marshall who is out with a hamstring injury and defender Danny O'Rourke and midfielder Augustin Viana are both questionable. But perhaps the biggest bright spot is that scoring threat Jairo Arrieta is suspended for two games starting with tomorrow's match.

And with Toronto having recently snatched away former Crew assistant (player, legend, talisman) Duncan Oughton to join the coaching staff we have to hope that he's brought lots of dirt and a player by player breakdown with which to brief the team during training.

Tomorrow's match - like so many others - means a last chance for some players to prove that they should stick around (feel that bell tolling Bostock?) and for our Reds to prove that they've heard the words of Nelsen and Payne; that they've seen the empty seats in the stands and that they are if not more than the sum of their parts at least equal to them. And as I seem to state every time - this is going to be a long season - I just hope that we get to see some wins while we endure the remodel. So umm, come on you Reds? See you tomorrow folks.