The sole installment of the this week's Know Your Enemy Series, previewing TFC's upcoming opponent, the Houston Dynamo, looking at their recent form, the last meeting, and projecting their lineup.

Share All sharing options for: Know Your Enemy: Houston Dynamo – Meeting the Second

A week on from snapping that eleven-match losing streak, on the road no less, with a 1-2 win in DC, Toronto FC returns to the pitch on Saturday in Houston to face the Dynamo.

Eleven points off the pace of the final playoff spot in the East – though with a game in hand – TFC has twenty matches remaining to salvage a season that once more threatens to go off the rails.

The next four matches, a veritable trial by fire, beginning with this match in Houston ends with a visit to Kansas City, either side of home matches against Salt Lake and Montreal, two of the in-form teams in the league.

But first things first, the match against Houston.

Much of what was written before holds true, but a closer look at the Dynamo is in order. 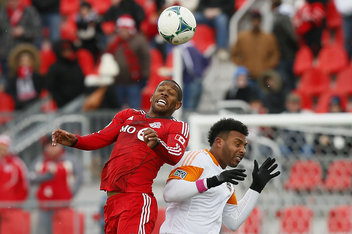 Stuck in a three-way tie for third-place in the East on 22 points, with a pair of teams just two points behind, Dominic Kinnear’s Houston have struggled through the last month of the calendar.

Their stoppage-time draw with TFC in April – more on that shortly – was the second of a five-game unbeaten run that saw them draw Colorado in the next round and take a modicum of revenge from Los Angeles a week later, in Carson, California - scene of their recent defeats in the MLS Cup Final - with Andrew Driver scoring the lone goal in a 0-1 victory – it was their first road win of the season.

The destruction of DC three days on, on the strength of a four-point night from Will Bruin (two goals and two assists), oddly spawned a turn in fortunes.

They would lose their next match upon returning to the comforts of home, albeit on short rest once more, to hated rivals Kansas City with Aurelien Collin nabbing the winner from a long throw, to snap their long home unbeaten run at 30 league matches – 36 all competitions.

Thus began a five-match winless run, losing at home six days later, to a rampant New England 0-2, then twice drawing 1-1 on the road - in a return fixture against KC and in Columbus - before succumbing to an energetic display from Montreal on Wednesday night in a 2-0 loss at Stade Saputo.

Mired in their longest winless spell of the season, the troubles have been spurred by a lack of production, with only two goals for - versus seven against - during the stretch.

Houston also fell out of the US Open Cup, having progressed through the Third Round with a 2-0 win over FC Tucson, only to lose 3-0 in the Fourth, away to Texan opposition, FC Dallas.

Jeremy Hall scored the opener in the 58th minute, when he collected a clearance at the top of the box, neatly switched onto his right-foot to make space for a low shot through a crowd and into the bottom left-corner of the Houston goal.

But, for the third straight match, Toronto would concede a late equalizer, when Darren O’Dea’s poor touch conceded at 94th minute corner kick and Ricardo Clark nodded a Driver delivery towards goal and Warren Creavalle flicked it high into the net from the goal-line.

Houston, through this rough spell, has been hampered by injury – Jermaine Taylor, Corey Ashe, Adam Moffat, Eric Brunner, and Giles Barnes, suspension – Bobby Boswell, for the incident with Dimitry Imbongo of New England, and international duty – Brad Davis and Oscar Boniek Garcia, who were unavailable against Montreal, following the USA-Honduras match on Tuesday.

But those concerns have dissipated and they should have their full lineup available come Saturday’s match.

Their projected lineup is as follows: Tally Hall in goal; from right to left – Kofi Sarkodie, Bobby Boswell, Jermaine Taylor, and Corey Ashe across the back; Adam Moffat sitting in the midfield hole, with Oscar Boniek Garcia, Ricardo Clark, and Brad Davis across the pitch; and the strike pairing of Giles Barnes and Will Bruin up top. Andrew Driver has proved a very good addition – on either flank, and could maintain his starting position in favour of Garcia. Garcia or Davis could also be played centrally with Clark moved back into a more defensive role, paired with Moffat, should Kinnear choose to field Bruin as the lone striker, which he has done in the past.

But given the opposition – TFC should hardly strike fear into the hearts of the Dynamo and prompt such a defensive-minded deployment – and the need for a victory, that seems unlikely.

Warren Creavalle too has proved himself as a very useful energetic option in the midfield, either in the middle or on the flank, and has scored three goals this season – including the one against TFC - as a sophomore player that continues to improve, though still finding his feet in the league.

Jamaican speedster, Omar Cummings, who has been hampered by injury since joining the side in the offseason, is fit and saw some action in the Open Cup, though he is likely to be limited to the role of substitute.

Bruin, when on, is a handful as evidenced by his night in DC.

He should be watched carefully.

Recently, Houston has found a lot of success by being very direct. Barnes’ game-tying goal against Colorado was a good example, with Drew Moor giving him way too much time and space after he collected a long Hall goal kick won by Bruin, sort of.

Barnes played provider on Driver’s game-winner in Los Angeles, latching onto a long ball from Boswell at the back before squaring into space for the Scotsman to finish.

Then, of course, there is the dreaded near-post cutback - a favourite of the Dynamo - which comes in any variety of forms, not just the standard from the end-line style.

Moor’s opener in Colorado, blowing past Clark as though he wasn’t there.

And Collin’s winner, the goal that snapped the streak, from a long, left-sided Seth Sinovic throw-in – not just for Matt Besler anymore – was equally poorly dealt with.

Kinnear will be pulling his hair out over those. Toronto should look to make use of their set-piece attempts, get big bodies into the box and provide some decent service – it proved fruitful against DC.

They were also absolutely shredded by New England’s movement, Diego Fagundez in particular - watch as he skips through the entire defense.

He toyed with them similarly in the match’s second goal as well.

And they were incredibly slow to recognize danger against Montreal, failing to pressure Patrice Bernier – one of the better passers in the league – and then not spotting the free run of Felipe, who opened the scoring for the Impact.

That hesitancy at the top of the box, as with Jeremy Hall’s goal for Toronto in the last meeting, haunted them in the second meeting with KC when Kei Kamara equalized with a low shot of his own.

This may be a match where the clever passing of Luis Silva and Jonathan Osorio could well prove fruitful.

Houston matches have been eventful of late, three red cards – Davis was dismissed for a lunge on Nathan Sturgis, while Boswell’s smash, and Imbongo’s retaliation were both deemed reason for expulsion, and three penalty kicks – two against and one for – with Landon Donovan missing his, as did Barnes against Montreal, while Federico Higuain converted his attempt for Columbus.

Houston has eight goals – of their nineteen total scored – in the final fifteen minutes of matches.

To end on a happier note, they may have the best in-house play-in music for their interviews – Beverly Hill Cop-inspired, electronic-drummed Eighties-awesomeness.