Toronto FC vs New York Red Bulls: Is Anyone Going To This Game?

Who's up for another TFC match? *crickets* With their third game in 8 days the Reds bring their tired legs back home to BMO to face the New York Red Bulls. Who wouldn't be excited by this?

Share All sharing options for: Toronto FC vs New York Red Bulls: Is Anyone Going To This Game?

It's fun times in TFC Land right now - back-to-back losses, undermanned team, forwards can't finish to save their lives, there's little creativity in the midfield and finding someone to competently play at left back is apparently impossible. Coming to town to (likely) take advantage are the Red Bulls, led by the dangerous duo of Thierry Henry and Tim Cahill - remember him and his two goals in April? Sigh. Expect goals in this one folks, lots and lots of goals - just probably from the wrong Reds.

In lieu of your regularly scheduled preview, we're going to try something a little different. For all the technical, statistical stuff you can check out the always fantastic Know Your Enemy by James. But really after this week of futility do we even care about the little things? Growing apathy throughout the fanbase suggest that tomorrow's match could be rife with banners, booing or just empty seats and silence. And that's about as serious as this preview gets

TFC Choose Your Own Adventure:

One hour before the game Toronto will issue a cryptic press release that states:

In the 11th minute the Red Bulls will:

In the 27th minute Jeremy Brockie will:

At the half reports will filter through the stands that:

In the 63rd minute Ryan Nelsen will:

In the 89th minute the following Red Bulls will have already scored at least one goal:

At the final whistle the fans will:

In all seriousness folks this likely won't be pretty. I'd like to say that our ragtag group of scrappy footballers will come together and show us that they: a) Can actually play for 90 minutes, b) Give a damn and c) Can score goals, but I'm not holding out much if any, hope. Are we willing to accept a well-fought loss? If they really, really try and yet still lose - will that be OK or will only a draw or a win - hey, it could happen *hysterical laughter* - be enough to ease the sting of this past week? Or does anyone really care and are biding their time until the alleged reinforcements arrive? Or are you just plain done with this TFC Adventure? So, see you tomorrow?

*Note: Here's our very own TFC-esque 'Choose Your Own Adventure' cover as done for us by our friend @ignirtoq from The Yorkies. 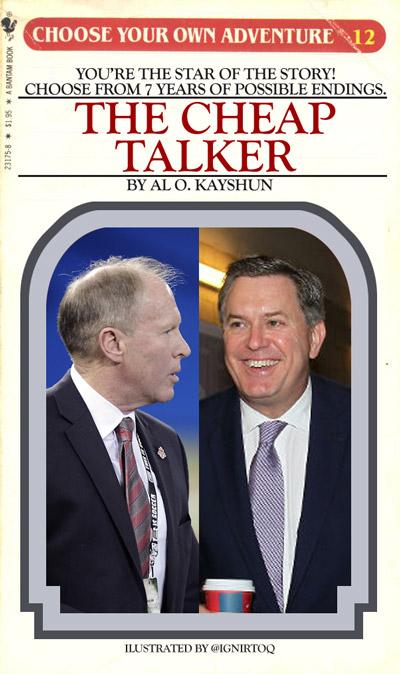