Max Urruti signing with Toronto FC? For real this time?

Transfer Window? Who needs a transfer window? Is the Urruti saga finally coming to a close?

Share All sharing options for: Max Urruti signing with Toronto FC? For real this time?

Well, after it went wrong in April, and after a long drawn out controversial courtship in this transfer window just closed, multiple reports from South America are suggesting that a deal has been reached and Maximiliano Urruti will be signing with Toronto FC.

Regular Urruti tweeter Emmanuel Quispe had this to say:

He also added that Urruti won't be considered a designated player, as well as saying that he met with Urruti and interviewd him before he got on the plane (edit: that tweet has since been deleted.) So this seems pretty legit.

Urruti to Toronto: The full saga. 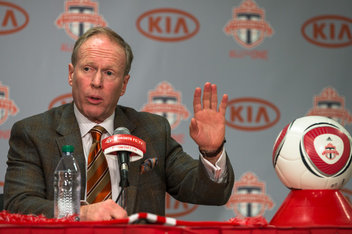 Usually this would be the point of the article where we'd say you never know for sure until you see the photograph of the player at Downsview holding up a shirt (unsmiling seems to be the trend these days) but with this one, the obvious stumbling block has been the club not agreeing with his interpretation of his contractual status, so I'd say don't believe anything until you see Newell's old Boys come out and confirm that they're feeling adequately compensated.

As far as that goes, we'll probably never hear anything definite from TFC, as per club policy, blah, blah, blah, but there's a few reports out there suggesting a deal has been reached, this is very much not a free agent signing.

This one, from Rosario3.com seems to be before any agreement was finalised, though they seem to accept he won't be coming back. It's full of tough talk of how though Urruti isn't a slave, he's under contract and they'll go as far as they have to to make sure they're not cheated out of what they're due. They were prepared to offer him a 3 year deal, but now they accept he wants to leave they're just going to make sure they get compensated.

This one from Agenciafe.com says Urruti will be leaving between today (Monday) and tomorrow, and that NOB will be receiving compensation. Unspecified but they suggest it might involve them coming to Toronto in their preseason.

Ahora Deportes goes as far as to put a figure on things, US$1.3m, though they can't confirm if there's any future sell on clauses.

So, it seems pretty official that this will be happening, that he'll be here to sign tomorrow, but I certainly wouldn't rule out any late plot twists with this one.

But let's assume it is happening, one thing that will be very interesting if it does is when exactly Urruti can play for Toronto, given the deadline for transfers has already passed. Will there be some typical MLS chicanery and shenanigans to provide a way for him to be available for selection right away? Perhaps some way for everyone to argue with relatively straight faces that the 'compensation' doesn't actually count as a transfer fee, that Urruti actually was a free agent so it's all good.

That might also explain how he's not going to be a designated player, as transfer fees are generally understood to be rolled into a player's salary over the length of the contract, so $1.3m divided by 2 1/2 years puts him at a DP level even without his wages, which you'd think are probably going to be quite good. If this can be explained away as technically not a transfer fee, then presumably that problem can be neatly sidestepped. Kevin Payne's giant pile of allocation money would be another explanation, and there's always that old favourite, the simple shrug of the shoulders and 'hey, it's MLS, there's a rule this whole time that no-one knew about'.

Hopefully this is the last time we have to do the whole 'rumours and reports say' kind of article (click here for all the other times we've done that one) and we can finally move on to the 'TFC confirmed today...' template instead. Then the theorising can begin, when he'll make his debut, where exactly he'll play, will he tear the league apart or have we signed our next Pablo Vitti? Would more people now consider this transfer window a success, a little more ready to forgive Payne's big talk? Who's going to be the other guy he was talking about and so on and so forth. It'll be good to be able to move on.

Urruti to Toronto: The full saga.