Possession and Wins in MLS

Many fans look at the way that Toronto FC play and the fact that they don't hold onto the ball as a reason for their struggles. It raises the question of just how important possession is in MLS. We look at the 2013 statistics so far to help paint the picture.

Share All sharing options for: Possession and Wins in MLS

All Toronto FC have to do is improve their ability to possess the ball and they will be a better team in no time. That is the simple logic that has been offered by many TFC observers. The question is, are they right; would increased possession lead to improved results?

Soccer Statistically did a post about the relation between possession and results in MLS back in 2011 and the results might have been surprising. They found that the average possession percentage for a winning team was 48.5% which means that the losing team actually held more of the ball on average. The short version was that back in 2011 possession did not equal results even when a team had more than 60% of the possession.

Have things changed in 2013 though? It seems likely that it will have considering that the top teams in MLS now seem to play a more possession based style than they did even two years ago, but will the numbers back that up?

First, here are the current standings in the MLS Supporters' Shield Race with no possession numbers factored in.

Now what would happen if we created a single MLS table built around possession. How much movement would take place if possession was what determined who belonged at the top of the table.

As you can see there is a lot of movement going on between the two tables, with several of the top teams in the Supporters' Shield race sliding down closer to the middle of the table, while DC United jumps up to near the top of the table in possession despite having an absolutely terrible record this season.

It is significant to note that despite all of the movement between the two tables, the top nine teams in the league all currently maintain a possession percentage over 50. Combine that with the fact the top nine teams in the league are in the top 10 in possession - DCU being the notable exception once again - and it starts to look like possession might just have something to do with getting results in this league in 2013.

So how do wins stack up when broken down by possession percentage for the winning team. The following two graphs divide the data into wins by the home team and by the away team. 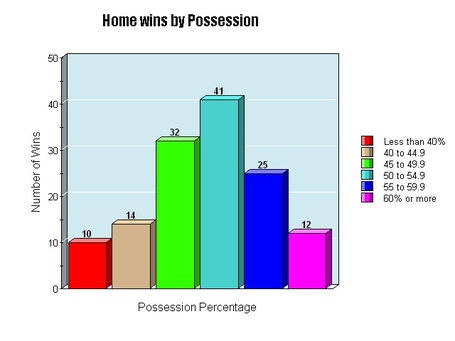 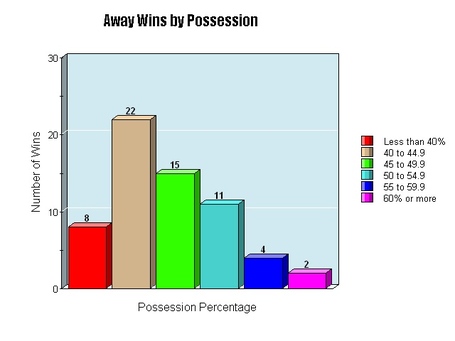 When it comes to road winners the graph takes on a very different shape. In this case the majority of the wins come with less than 50% of the possession and very few teams have managed to win on the road while having 55% or more of the possession. Most of the winning teams on the road do it with between 40 and 50% possession which is the opposite for home winners.

If you take away the home/away factor here is how the graph would look: 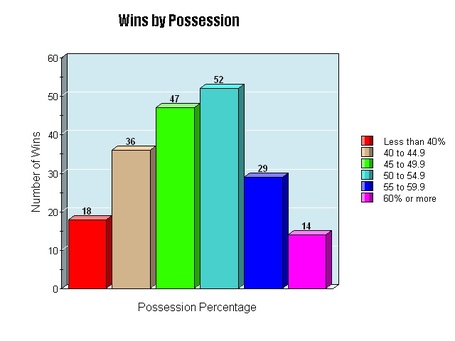 The one part of this graph that does jump out is the fact that there have been more wins this season by a team with less than 40% of the possession than there have been by a team with more that 60%. You would think that a team controlling the ball would be more likely to win the game, but it seems that when possession becomes that extreme the results become more unpredictable.

When you consider that Toronto is currently averaging just over 45% possession this season their struggle for results fits right with this data. In that possession range teams have only managed 36 wins in the entire 2013 season sample of 196 matches that resulted in a winner and a loser. That works out to just over 18% of the wins this season which is clearly not a great percentage.

It seems that if Toronto do want to be more competitive in MLS getting their average percentage up in the 2014 season would be a good start. This season the teams that are maintaining a possession percentage north of 50 are the ones that are winning the majority of matches. 48% of all wins this season have come to a team controlling more than 50% of the ball.

So if possession was not a good indicator of results back in 2011 it seems that has changed in the past two season. Now if you want to improve your odds of winning games a good place to start is by hanging onto the ball more. Just be careful of going over 60% of the possession because then things become far less predictable.