Bright Dike has confirmed that he is leaving the Portland Timbers with the deal just waiting to be made official. Of more interest to Toronto FC fans is the fact that he has been up to some interesting following on his twitter account this morning.

Bright Dike confirmed this morning that he is leaving the Portland Timbers but there is no word yet about where the 26-year-old American forward is heading.  He had this to say this morning on his twitter:

Thanks to all the tremendous people that watched me grow as a person and a player in Portland. I will miss the city. Thanks 4 everything

That is not the only interesting tidbit from his twitter this morning.  Along with announcing that he will be leaving the club, Dike did some following on twitter that stands out from his normal patterns.  The forward only follows 93 accounts and prior to this morning the only official team account that made the cut was that of the Portland Timbers.  That changed though as he now follows an account that all of us are familiar with. 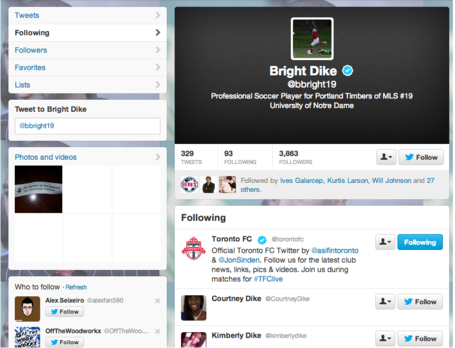 That is right folks, Bright Dike follows a new MLS team and it is Toronto FC.  Now that is not the most solid proof that Dike is coming to town but sure is a good indication that something could be in the works.  For fans interested, there is a good chance that news will be made public soon with Dike already announcing his departure.

So just what sort of player might TFC be getting in Dike?  Well, he is probably best considered as a depth player in this league.  He might be capable of being better than some of the forwards currently on TFC's roster but it would be foolish to expect him to come in and address the clubs scoring woes.

Dike has 6 goals in 23 MLS games with the Timbers having joined their USL team for the 2011 season and stayed with them following the move to MLS.   His scoring record in USL Pro has been impressive though as he scored 10 goals in 23 games for the Timbers in 2010 and 6 goals in 10 games while on loan with the LA Blues in 2012.

He looked to be developing in to a solid forward who could contribute for the Timbers in their improved offence under Caleb Porter but he never got the chance as his 2013 season has been sidetracked by a torn ACL that he suffered in the preseason.  He is now coming back from that injury but it will be interesting to see just where he picks up when he gets back to playing.

If Dike really is on his way to Toronto the question now is just what did the club give up to get the chance to bring him in.  If the deal is something similar to what they worked out with Sporting Kansas City for Michael Thomas than it might be worth taking a flier on Dike.  If TFC do give up more than a supplemental draft pick then some head scratching will likely take place.