The headlines on Monday may have gone to the men sitting on the stage with Bradley and Defoe deservedly taking centre stage but the day was also about the supporters who gave a taste of what it would be like if this club continues to do impressive things.

Yesterday was a day like no other in the history of Toronto FC.  If you happened to have the day off to follow along with everything you still would not have been able to keep up.  It seemed that every major network in the city of Toronto gave the signings of Jermain Defoe and Michael Bradley at least some coverage with TSN and Sportsnet leading the way.  There were so many different interviews, articles, videos, and appearances that it was impossible to keep track of them all.

I was lucky enough to be one of the select few who got to take part in the day in person.  I began the day with my media hat on going through the routine of watching the press conference, trying to grab some quotes in the scrums, and then mingling with the other observers.  The amount of media present at the event was several times more than you would find at any other TFC press conference with a number of unfamiliar faces in the crowd.  It made for a very hectic morning of trying to get to players, coaches, or management to get a quote so that we could all end up writing similar articles at the end of the day.

The club also invited the various supporters groups to send members to the event.  If you were watching the stream you probably hear them interrupting proceedings with cheers on a number of occasions.  The rowdy crowd upstairs certainly gave the press conference a different feel than you would ever get in the broom closet at BMO Field.  That crowd also made the event feel like that much more of a big deal.

It was good to see TFC giving some of their more loyal supporters access to the event.  On top of trying to win them back with big signings it never hurts to offer some free food and beer to the fans.  Having them there also served another purpose at it ensured that the players got their first real taste of what the fans can be like in Toronto and they seemed to be impressed by it.

After the events of the morning I took my media hat off and headed upstairs to join in the fun that the supporters were having.  At the end of the day it is where I still feel the most at home as I have more good memories from the south stand at BMO than I ever will from the press box.  Plus it is nice to get the "outsiders" perspective on things and step away from trying to over analyze every move. 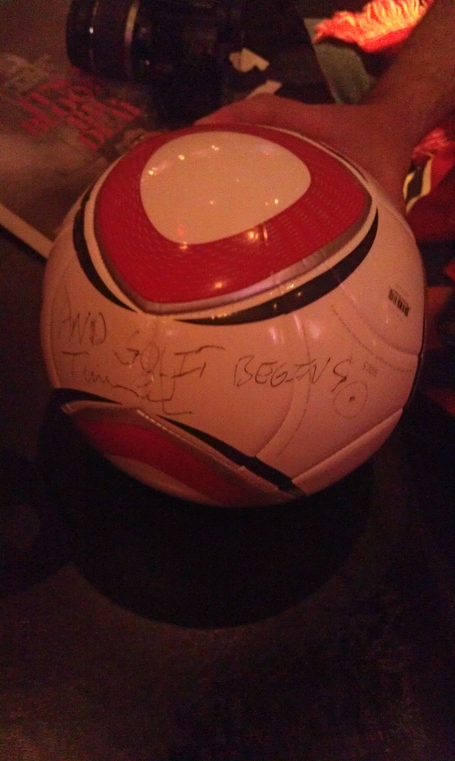 TFC continued to treat the supporters to nice little surprises throughout the day to help pass the time between the morning's press conference and the Q&A session scheduled for later in the afternoon.  It proved to be quite the fun afternoon and not just due to the number of TFC branded Buds that were being passed around.  The highlight of the afternoon may well have been getting to ride down to BMO Field on the Bloody Big Bus which turned into a bit of a party.  At BMO there were some photos ops for the club and the chance to go down to the field which was in rough shape thanks to some geese.  Then it was back to Real Sports for the afternoon's event. 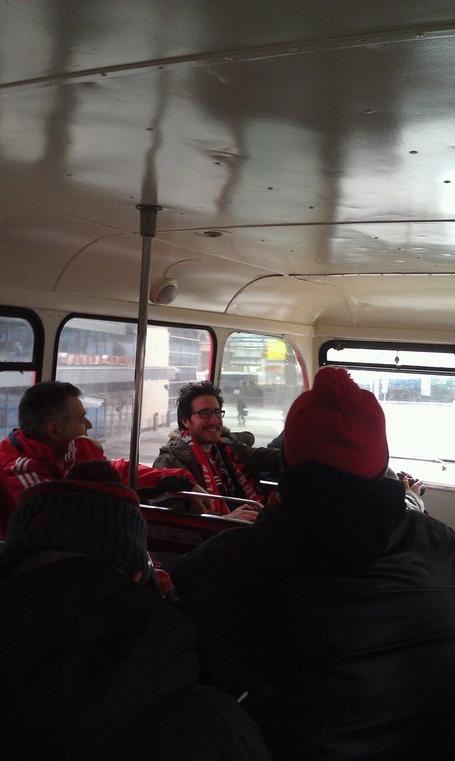 The Q&A was not all that informative but once again it gave fans the chance to give the players a warm welcome and feel special for being invited.  Of course, it led to more interruptions coming from the fans in the balcony who felt the need to keep on singing and cheer but this time around I was one of them and I was having fun.

That was the big take away from the day for me.  It was fun to be a TFC fan on this day which has not always been the case in recent years.  There was a genuine buzz, not just from beer, throughout the course of the day and that was great to see.

Most fans that I talked to noted that they were very excited by these moves but having been excited about other moves in the past are still waiting to see how it plays out on the field.  It is clear that the club has won some of that support back over and BMO will be loud this summer but that does not mean the pressure to win is reduced.  In fact, that pressure may be at an all-time high with fans now expecting the club to be one of the better teams in the league.

There was a sense of real optimism on Monday among supporters which should carry over until the start of the season.  The club did everything they could to get fans back on their side and it seems to have work.  Now, they just need to get down to winning games to keep things heading in the right direction.