The offseason seems to still be on a break for the offseason so why not pass the time with a bit of fun and games. Join us in building your own lineup based entirely off of players who linked to Toronto FC during 2013. The rules are simple but actually putting a team together may not be.

Share All sharing options for: Building a Toronto FC transfer rumour XI for 2013

One thing that 2013 did not lack in the world of Toronto FC was transfer rumours.  Just a quick scroll through the archives of this site and you come across a couple dozen names that were linked to Toronto FC at one point or another during the recently completed calendar year.

All of those rumours inspired the idea to use them to play a bit of a game.  The challenge is to build the best possible starting XI out of players that were linked to Toronto FC.  Since there were no keepers linked to the club in 2013, at least that I can find, we will just ignore that part of the squad and focus on the 10 position players.

The rules are simple:

1. The player had to be linked to Toronto FC in 2013 but not actually signed by the club

2. MLS rules need not apply as there is no real fun in trying to build such a team just to have a salary cap make it impossible

3. The formation is up to you but playing 10 forwards would be a bit of a cheap way to play the game

4. Post your team in the comments and let the debate begin!

With those rules in mind here comes the team that I managed to build and my explanation for the choices that I made in building the squad. 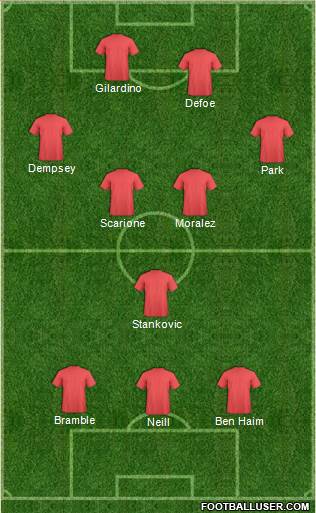 It was no easy task putting this team together.  I started building it from the front since I knew that was where the most options would be available.  Having elected to go with just a front two I then had to narrow down the list of attackers a fair bit before deciding to go with Jermain Defoe and Alberto Gilardino.

I wound up picking Defoe And Gilardino since they were two of the three forwards most closely linked to the club and in my opinion would be capable of starting ahead of Diego Forlan (go ahead and tell me I am wrong).  By selecting them I had to leave out the likes of Carlos Tevez, Samuel Eto'o, Georgios Samaras, Fabio Quagliarella, along with the far less glamorous rumours like Dave Kitson, Kevin Davies, Herculez Gomez, and Romell Quioto just to name a few.

There was certainly no lack of options at forward which is why I had to go with the strongest rumours in the end since that was easier than trying to figure out which two or three players on that list I would consider to be the best at the present time.

The midfield was again tricky to put together.  There were not a lot of wide options so I wound up going with the two real established names that were linked to the club that have played primarily on the wings rather than just playing someone out of position.  Having options like Ji Sung Park and Clint Dempsey on the wing would certainly lend plenty of support to the forwards.  The first man off the bench would probably be Jermaine Pennant who is the only other natural wide player that was linked to the club.

Things get crowded again when you start to look at the middle of the park.  Not a lot of defensive options in the midfield outside of Jermaine Jones so I once again went with a fairly attacking trio of players finding a way to fit Eziquel Scarione, Maxi Moralez, and Dejan Stankovic into the team.  It would be a very attacking triangle in the middle of the park with Stankovic being the most defensive option of the trio while the other two are both scoring threats allowing one of them to focus on being a playmaker at all times.

By electing to go with that trio I wound up leaving up Jones, Alexander Lopez, Yossi Benayoun, and Lucas Melano but they would certainly make for a strong bench should my team decide they need to go a little bit more defensive or add more width by inserting Melano.

The defenders were a bit of slim pickings to work with.  Going with a back three saved me from having to dig too deeply just to find warm bodies to play back there.  Obviously playing Tal Ben Haim, Lucas Neill, and Titus Bramble in a back three would be a complete and utter disaster but even if I had included either Carlos Bocanegra or Gleison Pinto Dos Santos that probably would not have made things any better.  Clearly signing defenders was not objective number one for TFC this season.  Heck, I almost included Jaime Peters in the team since he was on trial back in the spring but he missed out on the cut for the same reasons as Dos Santos as I decided not to include trialists.  At least Ben Haim made the cut for this squad as he never actually arrived at the club despite his loan being officially announced on the team's website.

I left the area between the goal posts empty due to a lack of options.  The closest I could find to a rumour was a joking suggestion that David Monsalve could be returning to TFC since he trained with the club while home in Toronto during the summer months.  I may just put TFC's big pile of allocation money in the net and hope I just out score everyone.

So there you have my "XI" and the reasoning behind my selections.  Now it is your team to put a team together.  A good place to start looking for names is in our "TFC Transfer Rumours" archive.  So go nuts and let us know what your team would look like in the comments.