It's Friday night, I'm done work and about to go on vacation. By Sunday I'll be in the sun, beside a pool, drinking a dirty banana, what could possibly piss me off right now? Well, thanks to Armen Bedakian for tweeting it and The Yorkies for pointing it in my direction, TFC's new kit can, that's what.

Yes some time today, MLSsoccer.com put out an article hyping 'jersey week'. TFC's new away kit will be revealed in a private event at Real Sports on march 6th.  It linked to MLSGearCanada.ca  where you can pre order the jersey (and while you're there, why not pick up a white one that will be out of date shortly, or the red one fro m 2012, still over $100 each!) and where there was a sneak peak. The pictures appear to have been taken down, now just showing 'image coming soon', but earlier there were a couple of details shown off. So what do we know?

Well, it's dark onyx/dark gray/black/whatever you call it with red accents. So far, so good, not that I'd have bought one due to the whole sponsor thing but that's another rant entirely. The colours I like. One picture showed the back of the neck, where once again, 'All for one' is there. Yep, the team's going to be forced to wear the marketing slogan out on the pitch, hooray for lost dignity, I can't wait for the reaction when they try and force that crap on the Leafs. But it's the other close up that causes all sorts of emotions in me. Disgust, disappointment, anger, bitter resentment, tired resignation, all that sort of thing. Certainly not what I'm supposed to feel, pride, patriotism, part of some collective 'leaf nation' (cos that's what this is about, the ML in MLSE, not Canada). 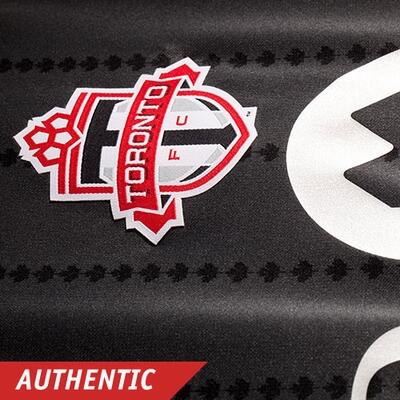 Yes, as you can see they've once again got their Maple Leaf on. I've previously railed against embossed maple leafs, or maple leafs within maple leafs, or weirdly fragmented maple leafs, and expected more of the same with this jersey. Seems like this time we're going to go with hundreds of tiny leafs. Seriously, pinstripes made of maple leafs.

Can we not stop with the faux-patriotism and the hokey emotional manipulation. Just give us a team to be proud of (to be fair, they've put a very good effort into that this off season) rather than trying to force it through this crap.

Anyway, I could go on, but I won't. Been there, done that. Thanks for sitting through this out of touch old man's ramblings.

So, there's a bit more info on the colour and details of the new jersey, what do you think?