Michael Bradley and Jonathan Osorio put in a strong performance in their first game together as they were the key to Toronto FC's 2-1 win over the Seattle Sounders. The initial performance together should give fans plenty of reasons for optimism moving forward.

On Saturday afternoon while Toronto FC was wrapping up a big 2-1 win over the Seattle Sounders we got our first real taste of the new midfield partnership between Michael Bradley and Jonathan Osorio.  It is a partnership that will be crucial for TFC moving forward this season and it got off to an impressive start in the opening game.

Neither player put in the best performance of their career by any means but they showed something that should inspire confidence for fans moving forward.  The key takeaway was that both players proved that they could function on either side of the ball.  With Osorio showing that he can help with the defensive duties it means that Bradley will be able to get forward when the chance is there.  We already knew that Bradley could defend well which would allow Osorio to join the attack but now it seems like we could very well see the two taking turns pushing forward and dropping back.  If they can continue to strike that balance it would allow the pair to really dictate games when TFC is in possession.

More: From pre game to post, all our coverage of TFC's win in Seattle.

In a match where TFC only enjoyed 32% of the possession and went long periods of time without the ball it meant that the pair of central midfielders had to do more defending than creating.  They did the job well though winning a combined 8 tackles, blocking 1 shot, intercepting 5 passes, clearing the ball 8 times, making 16 recoveries, and only committing 5 fouls in doing all of that.  They were TFC's most active players and really made it hard for Seattle to get anything going down the middle of the pitch. 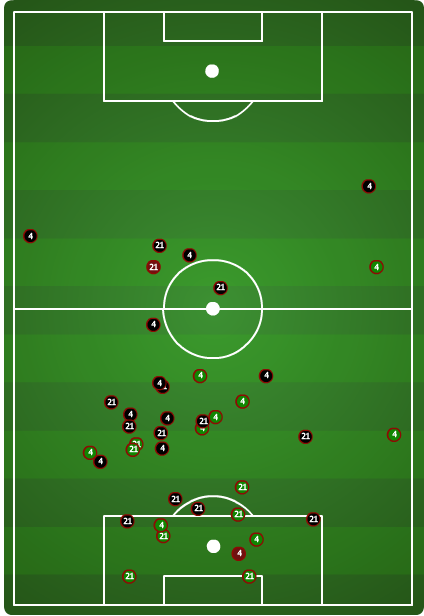 A quick glance at the OPTA chalkboard for the game shows just how active the duo were in the game.  The above image includes all of their defensive efforts from the game.  The only two negatives in the bunch are a lost tackle by Osorio and a corner conceded by Bradley.  The two of them were all over the field but it was once the Sounders entered TFC's end that they really did the bulk of their defensive work.

When TFC was not busy defending the pair were also key to what they did manage to generate going forward.  Jermain Defoe may get the headlines for scoring the two goals but the heavy lifting was being done by the central midfielders.

With TFC only managing to complete 70% of their passes there were very few standouts on the passing front.  Even Bradley and Osorio only managed to combine to complete right around 67% of their passes.  Bradley was the more active of the two with 56 pass attempts while Osorio had 37.  The only other player to attempt that sort of passing total was Justin Morrow who had 41 pass attempts in the game.

While their percentages and even passing totals are nothing to get excited about moving forwards there is still reason for optimism about the way they were trying to distribute the ball. 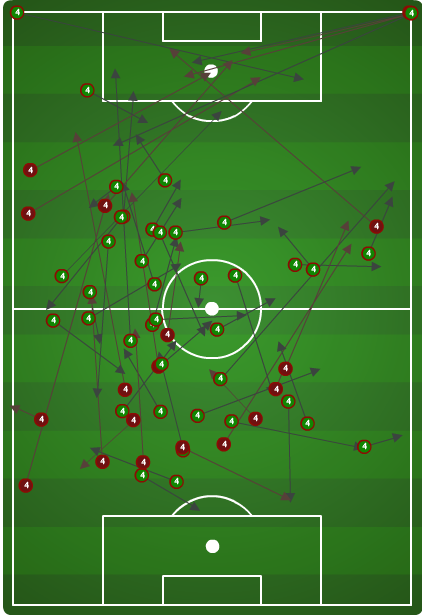 Bradley's passing was far from his crispest display but a lot of the balls that he hit showed a real attacking intent.  There was the odd short pass and back pass in his game but for the most part he was playing the kind of ball that launches attacks.  He was consistently trying to find his teammates in dangerous areas of the field.

His work on set pieces was also something to be optimistic about moving forward.  He showed that he can consistently get the ball into dangerous spaces on corners and free kicks which is a skill that TFC has been lacking in recent years.  When Bradley got the chance to get the ball into the box he did that and with a little more of his normal accuracy it should lead to plenty of chances.

The location of many of Bradley's passes is a good illustration of where he was trying to work during the game.  He was not just staying at home and making passes in his own end but rather was pushing forward when the chance was there.  Surprisingly his passing in Seattle's half was actually more accurate than it was in his own which is something I am sure he will want to tidy up moving forward. 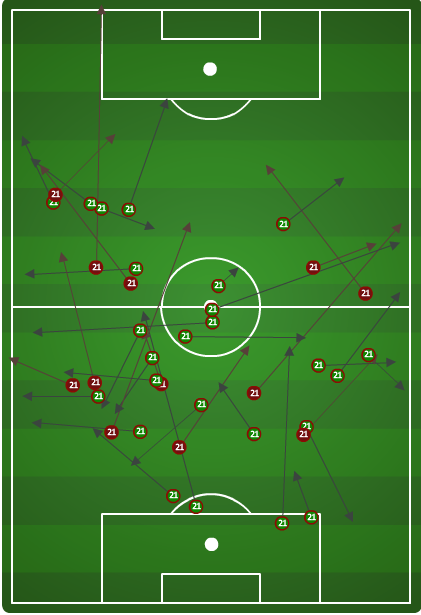 Osorio seemed to be doing more work in his own end of the field.  His passing chart is a bit less crowded that Bradley's but again it shows that he was trying to push the ball forward and get it wide when the chance was there.  He was not just relying on short passes or giving the ball to Bradley which is encouraging for the partnership.  Bradley and Osorio were each-others favourite targets for passes during the game but it was not the bulk of either's pass attempts.

Osorio did the majority of his passing in his own end of the field this game which is completely new for him as last season he was either working out on the wing or as an attacking midfielder.  This defensive role is a new one for him and he did a good job not only winning the ball for his team but also looking up and picking up passes.

For a player in a new role it was impressive to see just how active he was on both sides of the ball.  While it might have been easy for him to defer to Bradley or even wind up lost in his shadow he managed to avoid that and was arguably TFC's best player over the course of the full 90.

Osorio even added a very nice assist on Defoe's opening goal which is certainly worth another look as his through ball was perfectly weighted for the forward to run on to not to mention the fact that it perfectly split the defenders leaving Defoe little more to do than apply the finish.

On the whole, it was a performance by the pair to inspire a lot of confidence.  When it became clear that Matias Laba was leaving town it raised some real concerns that Bradley would be forced to play in a primarily defensive role but for the most part those fears were put to rest on Saturday.  By having Bradley and Osorio playing together in the midfield and occupying similar roles it ensures that they share the defensive duties which will allow both of them to push forward when the chance is there.  Given the players Ryan Nelsen has to work with he seems to at least be making the most of his central midfielders by striking a balance between defending and attacking.