Toronto FC used some text book high pressure in the lead-up to Jermain Defoe's second goal against Seattle. Just by stepping up at the right time they forced a bad pass which was all Defoe needed to find the back of the net for a second time.

When Ryan Nelsen first arrived on the job last season he showed one tactical tendency early on.  No matter what players he had or what formation he was using he always liked to try and employ a high pressure approach.  It was a lot of extra work for his forwards and midfielders to start defending so far up the field but when it worked it was capable of producing scoring chances.

The high pressure was back on Saturday with Toronto FC consistently pushing up to challenge the Seattle Sounders within their own half.  As soon as the ball was played forward to one of the midfielders there was a red shirt in the area to close them down.  They did not sustain the tactic the entire match as the team dropped a bit deeper in the second half and the Sounders started to play the ball wide more frequently but before they made that switch they made the high pressure count.

More: From pre game to post, all our coverage of TFC's win in Seattle.

Toronto FC's second, and game winning, goal came as a direct result of their high pressure game.  Without several players being dedicated to closing down their man Seattle likely gets out of their own end with ease and Marco Pappa never makes the terrible back pass that allowed Jermain Defoe to pick up the ball in space before finding the back of the net. 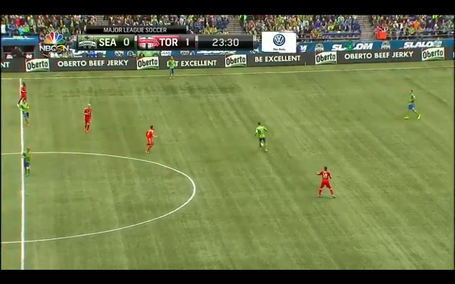 The play begins with Seattle being able to play a simple pass out of their defence.  The ball is played to Brad Evans who is initially in space but as soon as he collects the ball the pieces start to move for Toronto FC to begin pressing.  The direct pressure on Evans comes from Dwayne De Rosario who moves to close down the middle forcing Evans to make a quick decision what to do with the ball.  While DeRo closes down Evans the rest of the team moves in to areas that limit his options.  Jackson pushed up to close down his pass to the wing, Michael Bradley shifts into the space left vacant by DeRo moving forward to ensure the middle of the field is not an option, and Defoe slides forward to make any pass back to the central defenders tougher.

With Chad Marshall and Djimi Traore being shadowed by Defoe and Osvaldo Alonso being watch by Bradley it leaves Evans with limited options to work with.  Once DeRo closes him down he is forced to move out towards his right side where he now has to also be aware of the presence of Jackson who has pushed up to be closer to DeAndre Yedlin.

Evans winds up playing the ball to Yedlin on the wing who is already being closed down by Jackson and has to make a quick decision of his own.  His options are limited to hitting a risky pass back to Marshall, clearing the ball down the field, or playing a quick pass inside to Marco Pappa.  Yedlin goes with the inside pass and then makes his own run down the wing to try and become and option for Pappa. 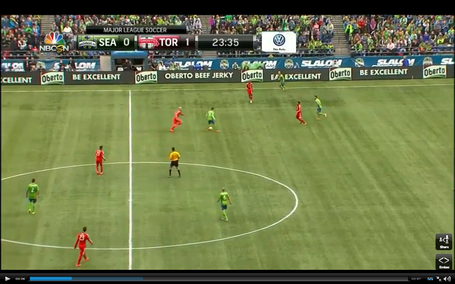 By the time that the ball reaches Pappa's feet TFC's press is already in full effect.  DeRo has stayed close to Evans, Jackson is still in position to cover Yedlin who is now heading down the wing, and Defoe is still floating around near the defenders.  That leaves Bradley as the man tasked with closing down Pappa and he wastes no time in doing so.

Before Pappa was even gotten the ball under control Bradley is already right on his back ensuring that turning and looking down field is not an option.  Even if he did he would find the only open Sounders player was Alonso and even he would have been closed down quickly by either Jonathan Osorio or Alvaro Rey.  Since he can not turn due to Bradley's pressure his only option is to look backwards towards his central defenders. 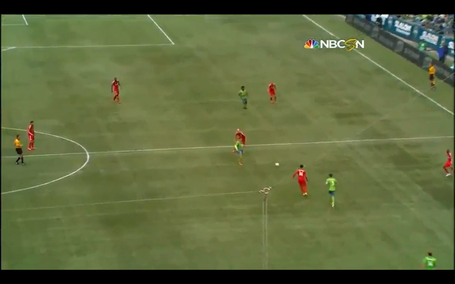 His pass is not only rushed by having Bradley on his back but the TFC midfielder is there so quickly that Pappa does not even have the time to look up.  If he had looked up for even a split second he would have seen Defoe was already in position to intercept any back pass and that his defenders were still sitting quite deep.

The ball that Pappa ends up playing is just played into open space.  It lacked the power to even get to the central defenders and was aimed to an area where neither Traore or Marshall would have an easy time getting to it.  If there were no pressure Traore could have stepped up and claimed the pass but Defoe reacts quicker and beats the defender to the ball with plenty of time to spare. 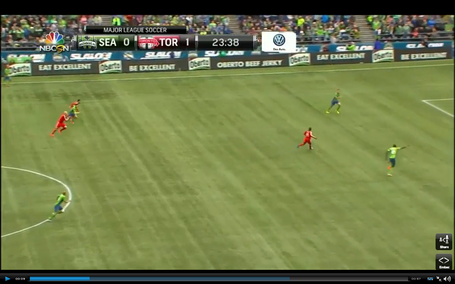 Once Defoe latches on to the ball there are only two Sounders defenders who are going to be involved in the play.  Marshall and Traore are both running back to get between Defoe and the goal but Defoe has been doing this long enough to know that if he were to try and split the pair it would allow them to both get involved in the play.  By cutting to his right Defoe ensures that Marshall will not have time to get over to help and he effectively isolates Traore.

Defoe going one-on-one against Traore is always going to favour the forward who has the advantage in both pace and positioning.  Traore follows the basics of defending and gets between Defoe and goal but with his momentum continuing forward it just takes a little shift to the right for Defoe to create a yard of space for himself. Traore is not back peddling and Defoe reaches the top of the box with space and his head up. 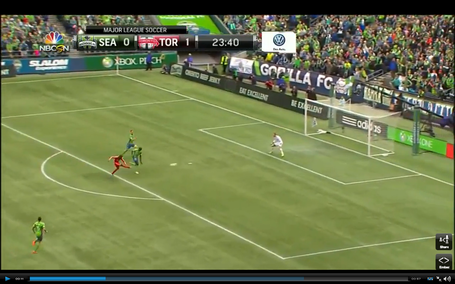 From there it is just about applying the finishing touch which is easy enough for Defoe.  Stefan Frei is only about six yards off his line by the time that Defoe gets in position to shoot so he has plenty of angles to work with.  Defoe goes with the easier shot as he elects not to go back across his body and risk Traore getting a block in.  He instead places a low shot down to Frei's right where the keeper has little hope of making a save despite reacting quickly to try and get down to make the stop.

The finish from Jermain Defoe was a quality one and still required a lot of talent but this goal never happens if not for a full team effort from the midfielders and forwards.  Goals like this are an example of why teams love to use that high pressure and why it was a key part of TFC's game plan against Seattle.  Once that ball got to a midfielder the team was quick to react and close down and they were rewarded for it.  If they continue to defend as a unit in the middle of the park we will probably see a few more goals like this as the season progresses.  After all, pressure leads to mistakes.