Javier Morales put on a clinic against Toronto FC on Saturday night and it highlighted a concern for the team moving forward. The talented playmaker had far to much space to work with and he made the most of it which is not something TFC can afford in the coming weeks.

On Saturday evening in Sandy, Utah Real Salt Lake's midfield diamond put on a clinic.  Their 3-0 win over Toronto FC may have been highlighted by two goals from Alvaro Saborio but the real star performer of the game was Javier Morales who spent the game pulling the strings for his side.

The performance by Real Salt Lake was far from flawless but their ability to move the ball quickly through the middle of the park and find space to transition against TFC was impressive for those watching the game closely.  In the first two weeks of the season, Toronto were able to force both the Seattle Sounders and D.C. United to play the ball wide which limited their attacking options.  They were also able to set up pressure near midfield which led to a number of turnovers and in the game against Seattle helped them get on the score board.  They could not do the same against RSL though despite the fact that Michael Bradley did well to limit to impact of Kyle Beckerman on the match.

When RSL got the ball in their own third of the field they were quick to turn it up field and get on the attack.  The speed of their turn around limited TFC's ability to even get set up and pressure them which allowed a number of RSL players to regularly get the ball in a decent amount of space.  When Beckerman did win the ball, which was quite frequently, he may not have had time to bring it forward himself but he was quick to spread it to one of his midfield partners often looking wide to Luis Gil or Ned Grabavoy.

Against Seattle and DCU when the play went wide it often stayed out there as Bradley and Jonathan Osorio did a very good job of restricting the options in the middle of the field.  With Osorio out of the lineup his role fell to Jeremy Hall who was simply not up to the task on Saturday night.  Hall should have been the one tasked with keeping Morales' impact on the match to a minimum but more often than not he was leaving the gifted play maker in acres of space and forcing the central defenders to pick him up instead.  Problem with doing that was that Steven Caldwell and Doneil Henry were being kept very busy by Saborio who was lively in the attack all game long.

Rather than driving the bus over Jeremy Hall who was making his way back from injury we will just leave it at saying that he was certainly not good enough against RSL and the team paid for it.  Instead it is worth focusing on what Morales did to find so much success against TFC.

Having space to work with in a game is one thing but it only matters if you actually make use of that time and space on the ball.  Morales did just that on Saturday night as the only thing missing from his performance was a goal of his own.  He did have an assist on Sabo's second goal of the game on a play that served as a perfect example of just what RSL is capable of doing in the middle of the park.

The goal starts with Toronto trying to launch their own attack by playing the ball long down the park but the header is won by Gil and falls right in the path of Beckerman.  Like he did so often during the game, Beckerman wastes no time on the ball and actually uses his shoulder to play it forward to Morales on his first touch.  Morales is once again in space but is also quick to keep the ball moving as he has his head up and spots that Saborio has gotten inside position on Bradley Orr.  A little lofted pass that falls right in Sabo's path and a nice chip later at it is 3-0 for the home team.  The goal involved four players making a total of four touches and was a perfect example of just what RSL can do when given that little bit of space.  The key to it all though is Morales being able to make that perfect pass as any more weight on the ball and it likely bounces harmlessly to Julio Cesar instead.

If someone is in position to cover Morales that goal probably never happens as he would not have had the time to look up and pick out his pass while running on to the ball from Beckerman.  The problem is that covering Morales is easier said than done.  Just look at his passing chart from the match and you will see that he was all over the field and was getting involved in play well outside of the attacking third. 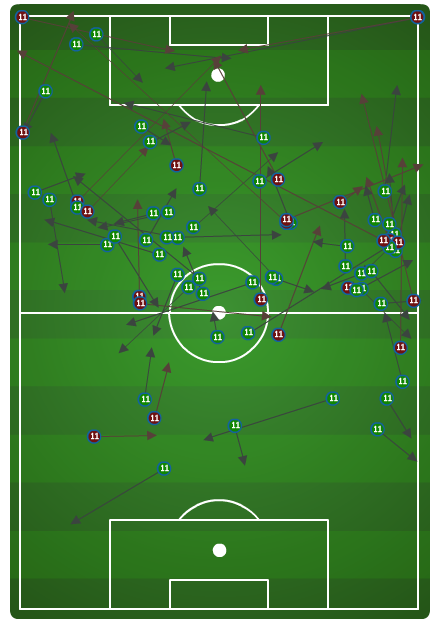 Tracking a player like Morales all over the field is nearly an impossible task but the issue for Toronto FC was that he was finding so much space wherever he went.  He should have been one of the players who they were most aware of along with Beckerman as they really are the two that make things happen for this team.  If TFC are going to compete with teams like RSL who have more than one threat in the middle of the park they are going to need someone other than Bradley to step up and help do the job.

On Saturday night, Hall was not the man for the job and with Osorio out injured there really were no other options.  Kyle Bekker did a good job when he came on but if he had been tasked with dealing with Morales for the full 90 things likely would not have gone any better.

It would have been interesting to see how Osorio would have done with the assignment.  His defensive work rate and positioning were impressive in the first two matches of the season but he had not faced anyone like Morales yet in his new role.

Problem now is that Toronto FC could be without the Canadian midfielder for a few more weeks and the task is not going to get any easier for Jeremy Hall and Co.  Their next three opponents are the Columbus Crew, Colorado Rapids, and FC Dallas and though none of them have the midfield punch that RSL pack they do have some gifted attacking midfielders.

Just how Toronto FC deals with Federico Higuain and Mauro Diaz in their next two road games could dictate what kind of results they come away with.  The duo from Columbus and Dallas are two of the hottest players in the league right now and can change a game if you give them even a little bit of space to work with.  If Toronto FC gives them the same kind of space that they gave to Morales things could wind up getting ugly quickly.

It will be up to Ryan Nelsen to figure out what changes his team needs to make to be able to deal with any continued absence from Jonathan Osorio.  If Hall continues to not be up to the task it could be a major concern for the team as they also prepare to lose Bradley to the World Cup in the coming months.

There were positives to take from the game against RSL though and it is far from time to hit the panic button.  If TFC can learn from the match and fix their mistakes in the coming games they will be in good shape.  Just like keeping Morales quiet is a key to beating RSL the same is true for Columbus with Higuain and Dallas with Diaz.  All three teams have other weapons but they love to play through their creative midfielder on a regular basis so forcing them to go to plan b is always a good start to coming away with a result.

It was a rough day at the office for Jeremy Hall and Toronto FC but a few small adjustments and they may just find themselves competing with the top teams in MLS but for now they have 3 points from two of their toughest away trips against Western Conference teams which is nothing to scoff at.