Fans finally got their first look at the plans for the expanded BMO Field. Renderings of the improved facility were on display at the public forum about the expansion on Wednesday evening.

Many fans have been wondering just what an expanded BMO Field would look like.  On Wednesday night they got their first glimpse of what it could be.

Renderings for the improved BMO Field were on display at the public meeting that was held at Exhibition Place on Wednesday evening.  The plans show how the stadium would look in a trio of different setups.  The expanded BMO would hold 25,000 fans for CFL games and be capable of reaching a capacity of 40,000 for special events like the Winter Classic and even the potential to host games during the 2026 FIFA World Cup.  The bulk of the added seats would come with expansion of the Eastern stand. 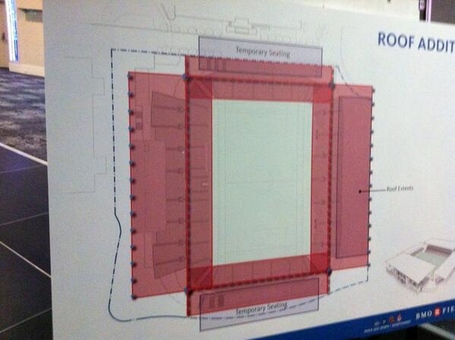 As you can see the plans include putting a roof over all of the seats in the ground.  Adding cover for the fans was one of the key selling points for the expansion fans every time that Tim Leiweke talked about them so it is no surprise to see a roof over every seat in the house. 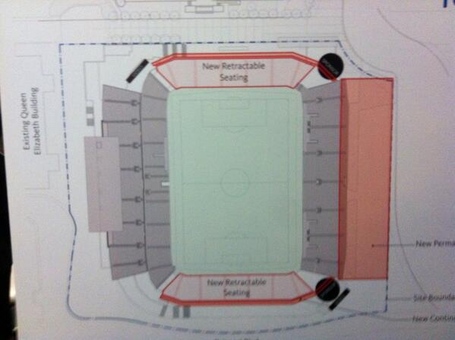 The above image is what the proposed stadium would look like when setup for a Toronto FC game.  Both the north and the south stands will be retractable to allow for the additional yardage required for a CFL field but will be in use during soccer games.  There will also be the additional seats on the East side as well as an improved concourse around the entire facility. 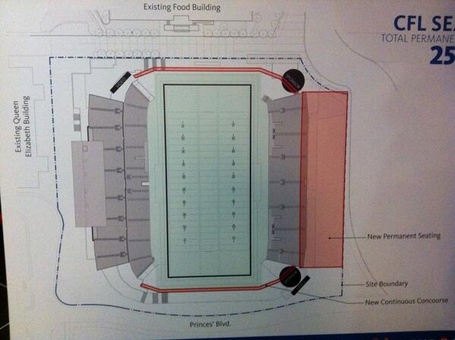 The final image is what the stadium will look like when set up for a CFL game.  As you can see both the North and South Stand are retracted to make room for the larger playing surface.  The expanded east side makes up for those lost seats though as they would still be able to fit 25,000 fans into the stands.

So now we know what the stadium will look like should the expansions go ahead.  It includes all the features that the club have been referring to in recent months including the roof and the retractable stands and there really are no surprises in these renderings.

How do you feel about the expansion plans for BMO Field?  Do the renderings make you more or less comfortable with the upgrades?