Know Your Enemy: Colorado Rapids - Part One – The Lineup and the Form

Share All sharing options for: Know Your Enemy: Colorado Rapids - Part One – The Lineup and the Form

The road-show returns to Toronto on Saturday when TFC take to the pitch at BMO Field against the Colorado Rapids for their second home game of the season.

Nine points from four matches has the club sitting pretty atop the Eastern Conference and in second place in the league – rarified air to be sure.

But now is most assuredly not the time to rest on any laurels, however fresh, inviting, and verdant they may appear.

This early phase of the season, prior to the World Cup-inspired mid-season break, especially these first two months (with just six matches through the first eight weeks), were always likely to be a period of adjustment.

New acquisitions take some time to settle and a largely renovated side will need to learn each other’s tendency in order to coalesce – truth be told, one cannot make the playoffs this early, but points won now are as valuable as any.

Added to that, is the peculiarity that this will be Toronto’s third match against Western Conference opponents – a fourth will follow next weekend in Dallas – getting a lot of those pesky, long road-trips out of the way early.

The good aspect is that any points won now are effectively bonus when it comes to the Eastern Conference race; the bad - that when local foes go face-to-face ground can be made up more quickly with six-pointers aplenty.

But truly all this talk of standings and playoffs is entirely premature; there is a match to be played… a closer look at the enemy, the Colorado Rapids, is in order. 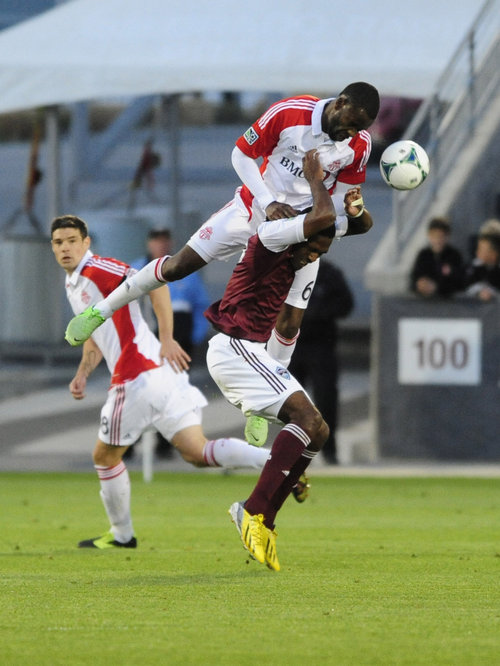 The off-season in MLS is always full of intrigue and whispers.

One of the more intriguing tales was the departure of Oscar Pareja from Colorado – a young team he led to the playoffs last season – to Dallas, a place that held a strong allure to his family and heart having played and coached there in the past.

Pareja stepped down on January 4th leaving the club in the hands of former club legend, Pablo Mastroni, taking up the helm on an interim basis six days later.

It would take nearly two months – the opening day of the season in fact, March 8th – for Mastroeni to be official named as the head coach for the 2014 season.

The Rapids were not in action that weekend, but still that sort of uncertainty could weigh on a club.

Instead, they have been rather successful through four matches – more on that shortly.

Aside from the Pareja departure, it was an understated off-season for the Rapids – their most notable departure was defensive midfielder Hendry Thomas, who was traded to Dallas, rejoining his former coach in Texas.

Also making their exits were a handful of role players: defender Diego Calderon, midfielders Jaime Castrillon, Jamie Smith, and Tony Cascio (who was loaned to Houston in the first-ever intra-league loan), and forward Atiba Harris, while in an interesting turn defender Kory Kindle opted to return to school in pursuit of further education – best of luck to the young man.

In filling those gaps, Colorado brought in a few MLS veterans with Marc Burch and Marvin Chavez joining from Seattle via the Re-Entry Draft and San Jose in the Harris swap; looked to the SuperDraft for a quartet of selections – goalkeeper John Berner, forward Marlon Hairston, midfielder Jared Watts and defender Grant van de Casteele, and sought out some foreign talent in the form of Spanish defensive midfielder Jose Mari and Austrian defender Thomas Piermayr.

They come into Saturday’s meeting with a few injury concerns. The ever-tenacious Brian Mullan was most recently listed as out, while promising youngster Dillon Serna, and left-backs Chris Klute and Burch were questionable - though Burch played the entire match in Vancouver.

They will welcome back Marvell Wynne, former TFC defender, from his one game suspension for a red card against Kansas City two weeks ago.

Their projected lineup is as follows: Clint Irwin in goal; from right to left – Shane O’Neill, Marvell Wynne, Drew Moor, and Marc Burch across the back; Jose Mari and Nick LaBrocca sitting (another former Red) in the midfield with Vicente Sanchez, Dillon Powers and Deshorn Brown across the midfield; yet another familiar face, Edson Buddle, will occupy the lone striking spot. Projecting Colorado’s lineup has proven particularly difficult this season, as Mastroeni has plenty of options at his disposal.

With Irwin recovering from a leg muscle problem through preseason, draft pick Berner did very well in his three matches in goal – it is unlikely that Irwin, who signed an improved contract recently after making the starting spot his own with an impressive 2013, will relinquish his grasp easily.

Klute is supposed to be out for a few more weeks with a hamstring and Piermayr traveled to Austria midweek to jump through some visa hoops – he will rejoin the side in Toronto, but may be a little over-travelled – leaving the back-line relatively straight-forward.

A defensive midfielder himself, Mastroeni has more than a few options, including another former TFC player, Nathan Sturgis, while rookie Watts looked good in his outing against Kansas City.

Sanchez is a dynamic force, he was left out of the match-day squad, but should be available.

Brown can play as either a wide attacker or an out-and-out forward, as too can Kamani Hill, while up top designated player Gabriel Torres is yet to really find him form, aside from a screamer he scored towards the end of last season.

Mastroeni did roll out a diamond 4-4-2 rather than their usual 4-2-3-1 in Vancouver last weekend, it did not produce the desired result until after the Matias Laba red card, but did keep the tricky Whitecaps under wraps for the most part.

With so many former Toronto players available, it should be particularly interesting to see who gets the nod where.

The match will be Colorado’s fourth of the season – two wins, a loss, and a draw - and they enter on a high, having come from behind to beat Vancouver 1-2 on Saturday.

After an opening day bye, they began their campaign in New York, scrapping to a 1-1 draw with Red Bull – Thierry Henry gave the hosts the lead in the 57th minute, only for a controversial penalty decision against Jamison Olave to hand Sanchez a chance from the spot, which he duly converted.

A week on, in frigid conditions, they opened Dick’s Sporting Goods Park against Portland, strolling out 2-0 winners thanks to a little more controversy – two more penalty kicks – despite Mari being sent off for a second booking.

The first came in the 73rd, converted again by Sanchez, after Donovan Ricketts came rocketing out of his area to clatter into Brown. Two minutes later it was Sanchez who ‘won’ the penalty kick, making the most of Andrew Weber going to ground when the Uruguayan attempt to round him in the box – Brown stepped to the spot this time; his effort was saved, but he duly touched in the rebound.

A week later two more second half penalty kicks – a bizarre handball call on Ike Opara and a straight-forward lunge from Benny Feilhaber, each converted by Sanchez – had them in the lead after Graham Zusi opened the scoring after 50 minutes.

But Feilhaber made up for conceding that second leveling within a minute and the dismissal of Wynne in the 85th for a second bookable offense opened the door for Dom Dwyer’s 92nd minute winner.

Most recently they traveled to Vancouver to defeat the Whitecaps 1-2 at BC Place last Saturday. Darren Mattocks would put the hosts ahead in the 67th minute, capitalizing on a quick break straight up the middle thanks to Pedro Morales and Kenny Miller.

But Laba’s touchy red card, his second yellow being a silly handball, breathed life into the visitors, who leveled from the restart with a majestic strike from el matador Mari in the 79th.

The Spaniard would reprise his celebration just two minutes later, passing a lovely finish into the Vancouver goal for the win.

Be sure to check back tomorrow for part two, where game film will be reviewed for strengths and weaknesses – preview, don’t concede a penalty.