Despite a season high in completed passes and possession percentage for Toronto FC the team struggled to create chances and get the ball to their forwards. Was there more at play than simply the absence of Michael Bradley?

Share All sharing options for: Toronto FC rely heavily on crosses, struggle to involve forwards in loss to Colorado

For the first time in the 2014 MLS season Toronto FC managed to come close to 50% possession over the course of a single game.  They finished this weekends game against the Colorado Rapids with 49.2% of the possession which blows away their previous best mark of 40% which they achieved against Real Salt Lake.

Toronto also enjoyed their highest  number of completed passes with their total of 424 against the Rapids.  Again this mark blew away the previous high of 354 passes which came against the Columbus Crew.   Their passing total was up against the Rapids but percentage wise they have remained consistent between 72 and 74% for most of the season with the exception being the D.C. United game where they only connected on 62% of passes.

Despite the improved possession number and passing totals the team seemed to be missing that cutting edge and outside of set pieces they really struggled to create chances.  Toronto did still manage to attempt a total of 12 shots in the game but they never really looked like they were going to score from the run of play.

So what was different from previous weeks where TFC have been able to create enough scoring chances to win games despite having so little possession to work with?

The first big difference was obviously the absence of Michael Bradley from the lineup.  He is normally the one who is making most of the passes to the attackers and he has proven to be able to launch attacks from a deep position which has allowed TFC to counter with speed and create chances before the defence is able to get setup.  Without him TFC took a step away from that quick attacking game and the result was that the forwards were left having to deal with an organized back line and struggled to find space.

Against the Rapids, TFC attempted a season high number of crosses as the Rapids were happy to let them work on the wings and felt that their central defenders could deal with TFC's attacking options when the ball did come in to the box.  TFC finished the game with a total of 36 attempted crosses which was well up from their previous high of 22 which came against RSL.

The result of all that crossing was actually a fairly good completion percentage at 41.7% but only led to four shots with three of them being off target.  The bulk of the crosses wound up being easily defended with Gilberto and Dwayne De Rosario struggling to find space in the area.

The reliance on crosses in the game was a very different approach to what we have seen from TFC thus far in the season.  Part of that may have been an adjustment made by the coaching staff as a result of Bradley's absence and part of it was certainly due to the play of the Rapids.  The Rapids did a good job of closing off the middle of the field led by the work of Jose Mari in front of the back four who filled a similar role to Bradley in his ability to get in passing lanes and cut off any room at the top of his own area.

TFC were forced to go wide and seemed willing to settle for it but the problem was that with only Gilberto and DeRo in the area they did not have a very favourable matchup for winning the ball once it was crossed in.  Much like we have seen with Doneil Henry and Steven Caldwell for TFC we saw the Rapids take advantage of the size and strength of Shane O'Neill and Drew Moor to deal with crosses.

When you look at the passing maps for Kyle Bekker and Jeremy Hall for the game you get an idea of just where they were finding open targets.  The clear majority of their completed passes in Colorado's half wound of being played to the wing. 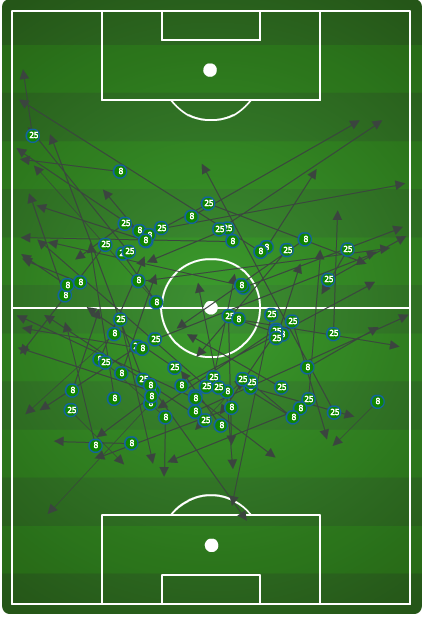 The imagine illustrates how few balls the pair were able to play in the middle of the pitch when it came to the attacking third.  They did a good job of spreading the ball wide but it is alarming to not see a single completed pass in our around the 18.

They did try to send some passes in to that dangerous area of the field but that is where they struggled to find their targets.  All 10 of their attempted passes that ended in the 18 yard area were incomplete which is another discouraging trend. 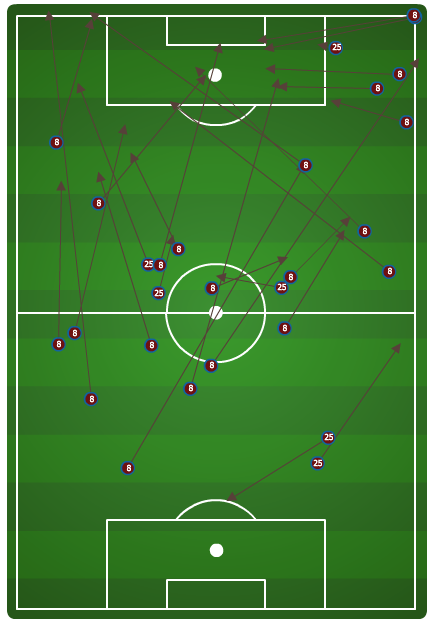 So when it came time to play their key ball into the forwards that is where TFC's midfield duo really came up lacking on Saturday.  The result of that was DeRo and Gilberto having to push out wide or drop deeper just to get involved in the game.  This was the most obvious with Gilberto who dropped well back on a number of occasions just to get a touch on the ball.

The forwards were isolated when they remained up top but by dropping so deep and shifting out wide just to get the ball it effectively limited the number of options that TFC had to work with in the middle of the park.  It is good to see Gilberto being active and looking to get involved in the game but you would ideally like him to be able to spend more of his time in dangerous positions rather than out on the wing or dropping back into his own half like he did against the Rapids.

If Toronto continue to play without Bradley for any stretch of time (like during the World Cup) they are going to need to address the way that they approach this game.  While Bekker turned in arguably the best performance of his career the team left their forwards starved for any kind of service and were forced to rely on hopeful crosses and only really looked threatening on set pieces.

One thing was clear against the Rapids and that was that between Bekker and Hall there is certainly not enough creative ability to unlock a team that is very disciplined defensively.  The Rapids remained compact and gave TFC's midfielders nothing to work with in the middle of the field but the best teams find a way to break that down.  Maybe the return of Jonathan Osorio will help provide a bit more creativity and help unlock this kind of defence but what was clear on Saturday is that TFC will need someone to step in to the role when Bradley is gone.

It would be a worrying trend to see this team continue to rely on the cross in the coming weeks.  If they were to abandon the middle of the field again against FC Dallas it could be another long day for the forwards as the middle of Dallas' back line is another group that is more than capable of dealing with crosses all day long.